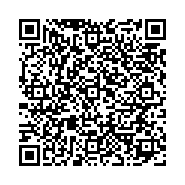 Objective: To investigate the effect of microRNA-21 on cardiomyocyte apoptosis induced by ischemiareperfusion injury and the role of PTEN/AKT/FOXO3a signaling pathway.

Methods: The rat model of ischemia and reperfusion was established. TUNEL assay of myocardial tissue apoptosis indicated that the apoptotic rate of myocardial cells in I/R injury group was significantly higher than that in normal group (P<0.01), suggesting the success of I/R Modeling. After isolation culture, cardiomyocytes were divided into normal group (Sham group), I/R group and I/R plus microRNA-21 group (I/R+miR-21 group). The effect of miR-21 on myocardial cell apoptosis induced by ischemia-reperfusion injury was observed by transfection of miR-21 recombinant lentiviral vector into cardiomyocytes. The expression levels of miR-21 and PTEN mRNA in myocardium were detected by RT-PCR. The expression of PTEN, pPTEN, AKT, pAKTser473, pAKTThr308, pFOX03a, FOX03a and FasL were detected by Western blot.

Acute coronary syndrome has an extremely high mortality as the clinical emergency and severe cases. Early reperfusion treatment is the most effective treatment currently, but reperfusion injury is an unavoidable problem. The recovery of blood supply of Tissue or organs after ischemia may increase the damage of ischemic tissue or organs, which is called ischemia-reperfusion injury (I/R). I/R can induce the apoptosis of tissues and organs, and it occurs early in I/R injury. It is important to understand the mechanism of I/R injury for precaution.

Micro RNA is a class of endogenous, non-coding, singlestranded RNA, involved in a variety of cardiovascular system physiological and pathological processes. MicroRNA-21 (miR-21) [1] is rich in cardiovascular disease and participates in the pathophysiological mechanism of various cardiovascular diseases. Many studies have shown that miR-21 has an antiapoptotic effect with unclear mechanism in I/R. Previous studies [2,3] found that phosphatase and tensin homologous gene (PTEN) that are deficient for chromosome 10 are the target gene of miR-21 in hypoxia-induced and I/R-induced cardiomyocyte apoptosis. It is found that PTEN/AKT/FOXO3a pathway is an important pathway involved in the regulation of apoptosis. PTEN can antagonize PI3K/Akt pathway and induce cell growth, differentiation, apoptosis and migration. The transcriptional activity of FOXO protein family (including FOXO1a, FOXO3a and FOXO4) is mainly through the regulation of phosphatidylinositol3 kinase/protein kinase B (P13K/AKT) pathway, which plays an important role in apoptosis. Therefore, we established I/R rat model to explore the effect of microRNA-21 on PTEN/AKT/FOXO3a signal transduction pathway and to study the mechanism of apoptosis in I/R process.

I/R surgical methods referred to the previous literature [4]. The chest and pericardium were open in the left edge of 2-4 sternal the intercostal space for the exposure of heart. In the right edge of the pulmonary artery cones and 0.5-1 cm of the edge of left ear, 6-0 silk was used to thread around the anterior. After placing a thick rubber tube in line knot, cardiac ischemia and reperfusion was simulated by tensioning and releasing the knot. After I/R modeling for 6 h, the heart was removed and rinsed with precooled PBS. The apex cordis was collected and placed in the methanol solution for 24 h.

Put tissue slice into 62°C incubator and stay overnight, and then put it into different concentration PK, and respectively put under 37°C to digest the slice for 30 min or 15 min. 10% of calf serum seal for 30 min under indoor temperature, adding 30 μ lTUNEL reaction mixture, putting into 37°C water to react for 1 h, TBS rinsing, adding 30 μl Coverter-AP (Anti-fluorescein antibodies-ALP) and place it under indoor temperature for 2 h, NBT/ BCIP+1 mmol/L levomisole developing, nuclear fast red redyeing. Select more than five high power fields in apoptosis area for each slice, accounting apoptosis rate of myocardial cell. The calculated apoptotic rate of cardiomyocytes was compared with that of the untreated group. The apoptotic rate of myocardial cells in I/R injury group was significantly higher than that in normal group (P<0.01), suggesting that I/R model was successful and I/R injury increased significantly Apoptotic rate (Figure 1).

I/R and non-surgical rat hearts were removed and cut, followed by repeated digestion of 0.1% trypsin and 0.1% collagenase. The cell suspension was filtered through a 200 mesh screen, washed with DMEM and placed in 5% CO2 at 37°C. Differential adherents were separated for 60 min and fibroblasts were discarded to obtain rat cardiomyocytes.

Hoechst 33342 was used to detect the apoptotic rate of cardiomyocytes in each group. Myocardium cells were digested with 0.25% trypsin containing 500% EDTA for 5 minutes. 105-106 cells were suspended in 1 ml DMEM medium and beaten evenly, after which 10 μl Hoechst 33342 dye was added and incubated at 37°C for 10 min. Cardiomyocytes were centrifuged at 500-1000 r/min for 5 min at 4°C and the supernatant was discarded. 1.0 ml Buffer A working fluid suspension cells and 5 μl PI dye were added at room temperature for 5-15 min for mixing and observed under fluorescence microscopy. Normal cells had low blue/low red, apoptotic cells high blue/low red and necrotic cells low blue/ high red, a total of 200 cells. The apoptotic index=Positive apoptotic cells/total cells × 100%.

After treated with TRIzol, the total RNA was extracted by chloroform. Reverse transcription was performed by RT-RT kit instructions at 37°C for 60 min. The PCR reaction was carried out according to the PCR primers and the probe sequence. The reaction conditions were as follows: 94°C pre-denaturation for 2 min, 94°C denaturation for 20 s, annealing at 60°C for 30 s, extending at 72°C for 30 s (a total of 40 cycles). PTEN and internal reference β-actin: cDNA was synthesized by reverse transcription at 65°C for 5 min, 42°C for 60 min, 70°C for 5 min. The reverse transcription product was reacted with PTEN primer and internal reference, respectively. The reaction conditions were: pre-denaturation at 94°C for 3 min, denaturation at 94°C for 30 s, annealing at 58°C for 30 s, extension at 72°C for 45 s, and cycling for 40 times. The relative expression of miR-21 and PTEN mRNA was detected.

SPSS19.0 software was used for statistical analysis. The results were analysed by t test or single factor analysis of variance. P<0.05 was defined as a significant difference.

Expression of miR-21 in myocardium of rats 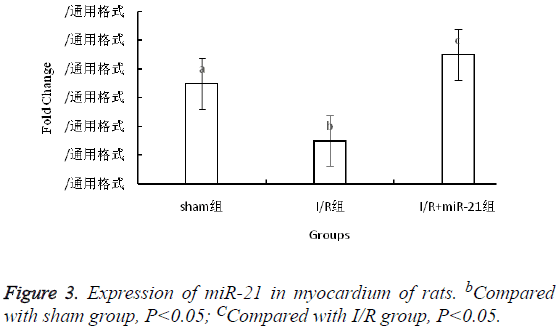 The expression of PTEN mRNA in myocardium of rats 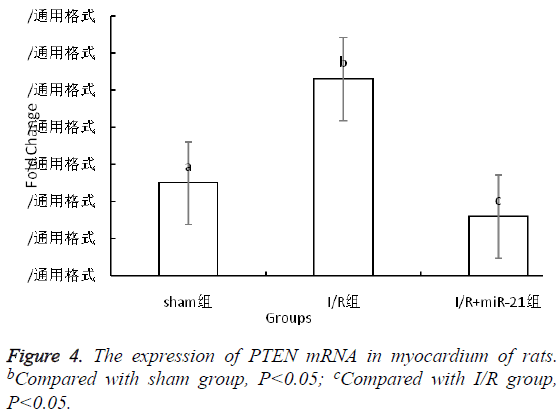 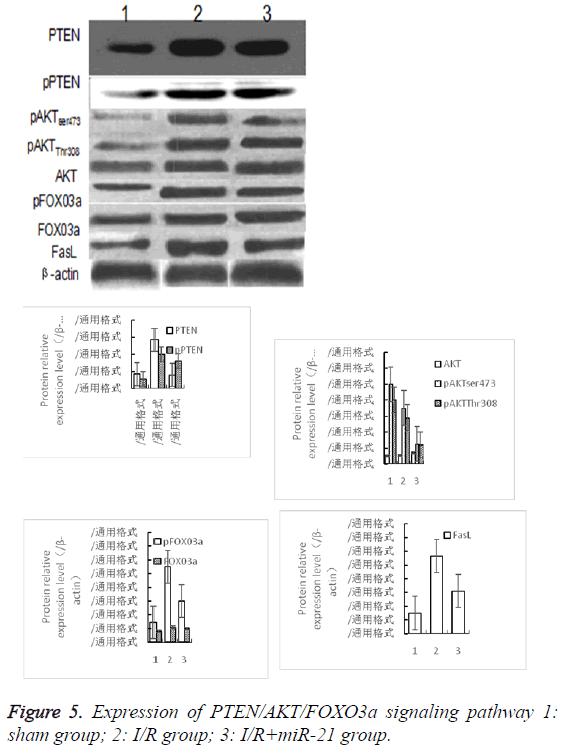 MicroRNA (miRNA) [5], consisted of 20-24 nucleotides in length, is widely found in eukaryotes. It is an endogenous noncoding controlled single-stranded small molecule RNA. A number of studies have shown that miRNA was an important post-transcriptional regulatory gene, playing an important role in negative regulation by inhibiting the translocation of target mRNA. It was also involved in cell differentiation, proliferation and apoptosis process. MiRNA-21 played an important role in tumor and cardiovascular disease, because of the independent promoter region that was not affected by other promoters of the coding region [6,7]. The previous research found that miRNA-21 plays an important role in various diseases. In the serum of patients with breast cancer, miRNA-21 level goes up, while by lowering PTEN to activate PI3K/AKT signal path and to phosphorylate FOXO3a [8]. And miRNA-21can down-regulate PTEN and up-regulate Akt phosphorylation, causing epithelial-mesenchymal transition of hepatocyte fibering epithelial cell [9]. Similar miRNA-21 expression in cardiovascular system and its affection on related passages remains unclear. Now there is a study regarded that in vivo and in vitro experiments showed that miRNA-21 expression was increased in models of heart failure, myocardial fibrosis and myocardial infarction. The high expression of miRNA-21 in myocardium significantly reduced the infarct size after myocardial infarction [8]. Thus, miRNA-21 had anti-apoptotic effect in hypoxia or acute myocardial infarction [9,10].

In conclusion, it was concluded that miR-21 could resist cardiomyocyte apoptosis induced by ischemia-reperfusion injury, and its mechanism may be the mediation by PTEN/AKT/FOXO3a signal transduction pathway.