Renal transplant recipients (RTRs) have increased cardiovascular (CV) risk. Arterial stiffness (AS) contributes to the occurrence of CV disease. We aimed to examine the effect of fluvastatin on CV risk factors and AS in RTRs. Fourteen dyslipidemic RTRs were enrolled. They received daily open-label 80 mg fluvastatin therapy for 6 months. Large (C1) and small (C2) vessel compliances of the radial artery were determined by pulse wave analysis at baseline and after 6 months of treatment with fluvastatin. No significant changes in C1 or C2 measurements were observed. Total cholesterol, LDL cholesterol, and triglyceride levels decreased significantly. Our results suggest that 6-month treatment with fluvastatin in dyslipidemic RTRs was not associated with improvement in AS despite significant improvement of lipid profile.

Cardiovascular disease is one of the major causes of morbidity and mortality in patients after kidney transplantation and one of the most important determinants of longterm outcome of transplantation [1]. In addition to traditional ones, nontraditional risk factors including reactive oxygen species, homocysteine, allograft dysfunction as well as arterial stiffness (AS), may contribute to cardiovascular risk in this population [2]. AS results in the reduction of the innate buffering capacity of the arteries and increased wave reflections. This subsequently leads to an increase in systolic blood pressure (SBP) and a fall in diastolic blood pressure (DBP) and therefore, to a widening of pulse pressure. The principal outcomes of these changes are left ventricular hypertrophy, aggravation of coronary ischemia, and increased fatigue of arterial wall tissues [3]. Increased AS has been shown in renal transplant recipients (RTRs). The use of statins in hyperlipidemic nontransplant and transplant patients improves lipid abnormalities and decreases cardiac deaths and nonfatal myocardial infarction [4]. Many have studied the effect of statins on AS in different populations including patients with chronic kidney disease. Until now, only one study reported in the literature has investigated the effect of statins on only artery distensibility of large arteries in RTRs, and have found no effect [5]. In our study, we investigated the effect of fluvastatin on AS in RTRs.

Fourteen (10 males and 4 females) stable recipients, older than 18 years, were recruited for this study. The study was performed in accordance with the Declaration of Helsinki and with the approval of the local ethics committee. An informed written consent was taken from all patients before they entered the study. The following exclusion criteria were used: having clinically overt atherosclerotic disease such as coronary artery, valvular heart, cerebrovascular, and peripheral artery diseases, heart failure, diabetes mellitus, acute or chronic inflammatory conditions, and acute or chronic infections.

Two recipients had been transplanted from cadaveric donors and the rest from living donors. The mean age of RTRs was 40.1 ± 10 years (range: 24-57). The median duration of dialysis was 12.6 months (range: 1-66) except a preemptive one. The median duration of transplantation was 3 years (range: 1-18). 4 recipients had a history of acute rejection. Serum creatinine levels were below 2.5 mg/dL in all patients at the entry of the study. During 6 months, 14 recipients received a daily dose of 80 mg fluvastatin according to ATP III guidelines[6]. At the time of transplantation, all patients had been instructed to follow a reduced cholesterol diet. Immunosuppressive therapy consisted of tacrolimus (TAC, n: 6) or cyclosporine (CsA, n: 8), as well as mycophenolate mofetil or azathioprine and corticosteroid (prednisolone 5 mg/day). Antihypertensive therapies consisted of beta blockers (n: 2), calcium antagonists (n: 6), angiotensin-converting enzyme inhibitors (n: 4), and thiazide diuretics (n: 3). Medical treatments of RTRs did not change throughout the study. Renal function, fasting plasma glucose, fasting plasma concentrations of total cholesterol (TC), low density lipoprotein (LDL), high density lipoprotein (HDL), triglycerides, body weight, body mass index, waist circumference, hip circumference, waist to hip ratio, SBP and DBP were measured at baseline and after 6 months.

All patients underwent pulse wave analysis (HDI/Pulse Wave model CR-2000) to determine large and small vessel compliances. Large (C1) and small (C2) vessel compliances of the radial artery were determined from an internal algorithm based on diastolic decay features of the calibrated radial pulse contour using a modified windkessel model measured at baseline and after 6 months of treatment.

There was no significant change in body weight, body mass index, hip and waist circumferences and waist to hip ratio after 6 months of fluvastatin treatment. LDL cholesterol significantly decreased and HDL cholesterol increased while there were non-significant reductions in TC and TG levels (Table 1). No significant changes were observed in glucose or creatinine levels, SBP, DBP, mean heart rate, large (C1) and small vessel compliance (C2) of radial artery after treatment with fluvastatin (Table 1). In subgroup analyses, no statistically significant changes were observed in C1 and C2 values of CsA (n: 8) and TAC (n: 6) groups after a 6-month statin treatment when compared the baseline values. There were no significant differences in the percentage changes of C1 and C2 values between both groups. There was no significant difference in intra- and intergroup comparisons of C1 and C2 measurements of recipients who were receiving some antihypertensive agents (n: 9), when compared with subjects who did not receive antihypertensive agents (n: 5). C1 and C2 measurements were similar in patients receiving calcium antagonists (n: 6) when compared with subjects who did not receive any calcium antagonists (n: 8). Renal functions of RTRs did not change during the 6- month follow-up period. No adverse event was recorded due to statin treatment. 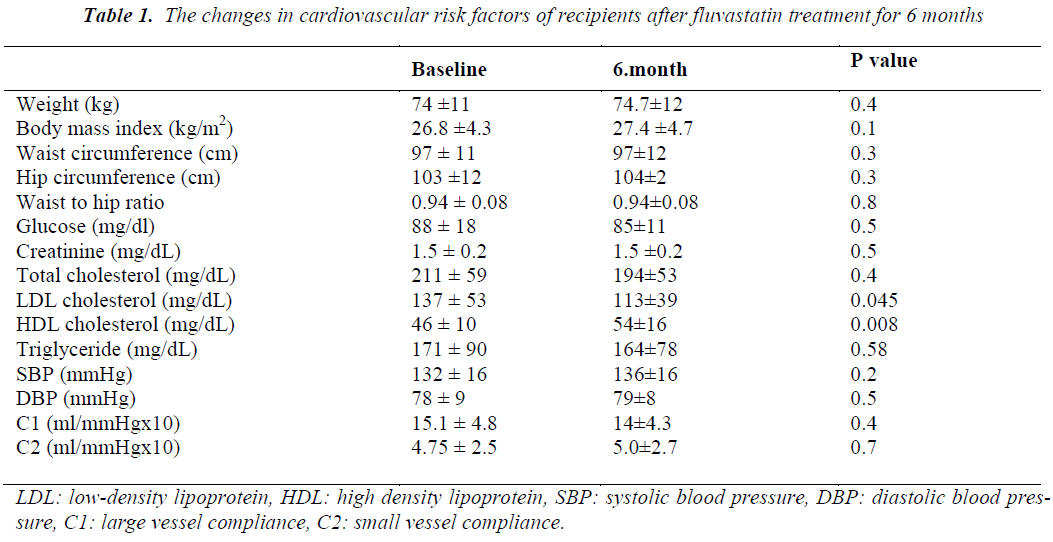 Table 1: The changes in cardiovascular risk factors of recipients after fluvastatin treatment for 6 months.

The results of our open-label study showed that fluvastatin treatment for 6 months had no effect on arterial compliance in RTRs despite a significant improvement in the lipid profile. In subgroup analysis, elasticity measurement type of immunosuppression or antihypertensive treatment given did not seem to affect arterial elasticity parameters.

In RTRs, presence of many factors such as immunosuppressive drugs, hyperlipidemia, hypertension, inflammatory milieu stemmed from rejection could lead to stiffening of arteries. Although dyslipidemia may be an important factor which may cause arterial stiffness in these patients, the results of our study does not show a beneficial effect of statin treatment on arterial elasticity parameters. RTRs have a higher incidence of dyslipidemia compared to the general population. They should be considered to be in the highest risk category for atherosclerotic diseases. ALERT study showed that treatment with fluvastatin reduced the incidence of major adverse cardiovascular events (cardiac death, nonfatal myocardial infarction, and coronary revascularizations) by 17% in RTRs [7]. The eventive effect of statins on coronary events is not only attributed to cholesterol-lowering, but also to various effects on the vascular wall such as inflammation, thrombosis, platelet aggregation, immunomodulation, endothelial function, and AS [8]. Inflammation has an important role in the stiffening of the arteries, possibly via changes in the composition of the arterial wall due to inflammatory cell infiltration or via endothelial dysfunction [9]. Accumulating evidence indicates that anti-inflammatory drugs may reduce AS. AS is a powerful predictor of cardiovascular outcome in RTRs. [2,10].

It was shown that in different non-uremic population cholesterol- lowering therapy decreases AS. In clinical studies, several parameters of stiffness have been measured to evaluate AS. Some investigators have claimed that C1 and C2 that we measured in our study have poor agreement with central pulse wave velocity, an established measure of central AS [11]. Yokoyoma et al. [12] showed improvement of stiffness by fluvastatin therapy after 12 months in hyperlipidemic patients. Saliashvili et al. [13] showed that compliance (measured by air plethysmography) improved significantly after two months of simvastatin treatment. Statins, by their pleiotropic effect may change microinflamatory state in the vascular endothelium besides reduction in lipid profile. In a double-blind, randomized, placebo-controlled trial, in which 6 weeks of 40 mg/day atorvastatin therapy was evaluated in patients with stages 3 to 5 chronic kidney disease, improvement in dyslipidemia and small-artery stiffness (C2) were reported [14]. Recently, Fasett et al. [15] documented beneficial effect of 10 mg/day atorvastatin in a similar populationon AS measured by aortic PWV at 3 years. Furthermore, in patients with end stage chronic kidney disease with type 2 diabetes mellitus, a double-blind, randomized, placebo-controlled trial performed with 20 mg/day fluvastatin therapy was shown to improve stiffness and inflammation measured by PWV and C-reactive protein in patients whose lipid levels were in the normal range [16]. However, 12-week atorvastatin treatment worsened PWV in hypertensive and hyperlipidemic patients in another study [17]. Hydrophilic and lipophilic statins may have different effects on vascular smooth muscle cell accumulation and collagen production, independent of their cholesterol- lowering effect. Ichihara et al.[9] evaluated the effects of a hydrophilic drug, pravastatin (10 mg/d), and two lipophilic drugs, simvastatin (5 mg/d) and fluvastatin (20 mg/d), and a nonstatin antihyperlipidemic drug (clofibrate 750 mg/d or probucol 500 mg/d) on PWV of 85 hyperlipidemic hypertensive patients. During the 12-month treatment period, PWV was transiently reduced by simvastatin and significantly decreased by fluvastatin. In addition, serum C reactive protein levels decreased significantly in the statin groups but not in the non-statin group. These results can be explained by the fact that fluvastatin has more potent antioxidative effect than other statins (pravastatin, simvastatin, cerivastatin, and atorvastatin), although simvastatin also has some antioxidant effect [18,19]. Fluvastatin (40 mg/day) treatment over 3 years resulted in a significant and sustained improvement in endothelial function in 26 hyperlipidemic RTRs in a placebo- controlled study [5]. However, this was not accompanied by a beneficial effect on impaired large carotid and brachial artery distensibility. Kosch et al. [8] suggested that hypertension and preexisting arterial damage may alter arterial distensibility in RTRs which is not reversible by lipid-lowering therapy alone and may override a putative beneficial effect of improved endothelial function.

Our study had some limitations. Because we selected only dyslipidemic recipients and the number of patients in our study was relatively small. Furthermore, our study was not placebo controlled. We have not measured the effect of fluvastatin on endothelial function or inflammatory markers.

In conclusion, in this study fluvastatin significantly improved the lipid profile in RTRs without any adverse effects. However this did not translate into an improvement in arterial compliance parameters.