The use of sigma- and pi-acceptors for the detection of some quinolones on thin layer chromatographic plates was investigated. Thin layer chromatographic plates, coated with silica gel were air dried and stored in an oven at 110oC for 30 minutes. Before use, the plates were allowed to cool to room temperature. Each of the drug samples (Reference, Cipro®, Ofloxacin) was spotted twice on a pair of coated plates. The plates were then placed vertically in a development tank containing a solvent system and allowed to stand undisturbed until the solvent front reached 15cm from the origin. The plates were then removed, air dried and sprayed with an appropriate locating reagent (iodine or chloranilic acid) and examined for colour formation/stability. In another set of experiments, the plates were counter sprayed with dimethyl formamide (DMF) and re-examined for reaction. The results showed that the chromogens formed from iodine and chloranilic acid were reddish brown and violet respectively. The reddish brown colour changed to yellow meanwhile the violet colour disappeared after six and 20 minutes, respectively. On counter spraying with DMF, the reddish brown colour changed to yellow and there was no increase in intensity in the reference drug, but there was in the test drugs. However, the intensity of the violet colour was generally increased. There were no significant differences (P>0.05 for each) in the Rf values of iodine and chloranilic acid chromogens of all the drugs. Sigma- and pi-acceptors can be applied in qualitative detection of quinolones

Sigma- and pi-acceptors are aromatic systems containing electron withdrawing substituents [1]. Thus, acceptor complexation is based on the reaction of some drugs (n-electron donors) with sigma-acceptors such as iodine, or with pi-acceptors such as 7,7,8,8-tetracyanoquinodimeth-ane; 2,3-dichloro-5,6-dicyano-1,4-benzoquinone; tetracy-anoethylene; 2,3,5,6-tetrabromo-1,4-benzoquinone (bro-manil); and 2,3,5,6-tetrachloro-1,4-benzoquinone (chloranil) [2]. These compounds readily form complexes with donor molecules giving rise to chromogens thus making them versatile in pharmaceutical and clinical analysis. The colour formed with such donor molecules has been reported to have intensities proportional to concentrations of donor receptor complexes [3]. Sigma- and pi-acceptors have been found to be very useful as detecting reagents in drugs and chemicals possessing nitrogen and other donor molecules [2-6]. Research workers have detected β-adrenergic blocking agents [4], antidepressant drugs [6], alkaloids [7], cehalosporins [8], diuretics and oral hypo-glycaemic drugs [9] as well as penicillins [10,11] using acceptor complexation.

Ciprofloxacin and ofloxacin are both 4-quinolones containing a carboxylic acid moiety in the 3 position of the basic ring structure, a fluorine substituent at position 6, and a piperazine moiety at position 7 [12]. These drugs are potent bactericidal agents against E. coli and various species of Salmonella, Shigella, Enterobacter, Campylobacter, and Neisseria [13]. They are generally well tolerated [14] and microbial resistance to their action does not develop rapidly [15]. The importance of these drugs especially in the third world countries can be estimated by the high success rates recorded in their use in some high morbidity and mortality ailments.

Attempts at quantitative detection of ciprofloxacin in our laboratories by charge transfer complexation using a spectrophotometer have failed principally because of the inability of complexes to remain stable enough for detection. Furthermore, this method is cumbersome and expensive, especially in least and less developed countries. Thus, the use of iodine and chloranilic acid for the qualitative analysis of ciprofloxacin and ofloxacin on thin layer chromatographic plates is hereby discussed.

One tablet each of the different drug samples was crushed to a fine powder in a clean porcelain mortar. A quantity (100mg) of each powder was transferred into a 50ml volumetric flask. A 10ml volume of ammonia was added to each of these flasks and stirred with a glass rod until dissolution was achieved. 10ml of chloroform placed in a separating funnel was added to the above preparation and shaken for 30 seconds and the chloroform layer transferred into a beaker and kept for analysis.

A 50ml volume of 1,4dioxane was placed in each of two volumetric flasks. A 0.5g quantity of each detecting reagent (iodine and chloranilic acid) was accurately weighed and transferred into each flask and dissolved by stirring. The solution was made up to volume with 1,4-dioxane to give 0.5%(w/v) solution of iodine and chloranilic acid, respectively.

Forty grams of silica gel (G1) were added to 80ml of acetone in a clean beaker and mixed to form a pourable slurry. The slurry was spread over clean dried 20×10 TLC glass plates to a thickness of 250mm using a kenso spreader (model CJK-520). The coated plates were air dried at room temperature and stored in an oven at 110C for 30 minutes and allowed to cool to room temperature just before use.

The most suitable solvent system observed from trial runs was composed of chloroform, ethyl acetate, hexane, and water in the ratio of 1:3:0.5:1 respectively. This was thoroughly mixed and transferred into a development tank. The tank was allowed to stand undisturbed for two hours to obtain equilibrium.

Each of the drug samples was spotted twice on the same pair of activated plates using glass capillary tubes. The plates were then placed vertically in the tank and allowed to stand undisturbed until the solvent front reached 15cm from the origin. The plates were then removed, air dried and sprayed with appropriate locating reagent and examined for colour formation and stability after which they were countersprayed with DMF and reexamined for reaction. The experiment was carried out five times for comparison and accuracy. The results of colour reactions and their corresponding Rf values were recorded.

The Table summarizes the colours of the chromogens formed, their reactions after counterspraying with DMF and their respective Rf values. The chloranilic acid gave a violet colour with the drugs (which disappeared after 20 minutes). The colour intensities of the ciprofloxacin and ofloxacin were greater than that of cipro® (a brand of ciprofloxacin). On the other hand, iodine gave a reddish brown colour with the drugs which changed to yellow after six minutes. The intensity of the reddish brown colour was more in the reference drug than in the cipro® and ofloxacin. 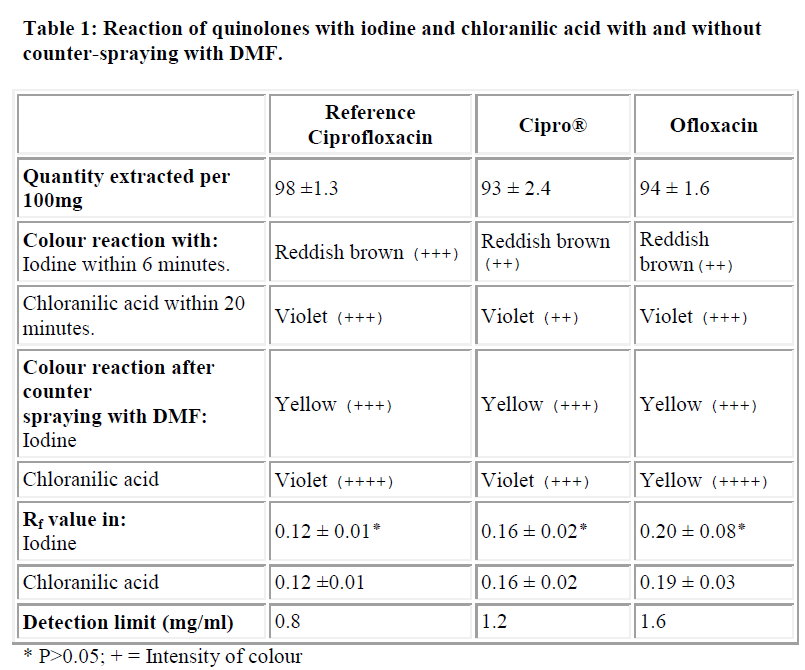 Table 1: Reaction of quinolones with iodine and chloranilic acid with and without counter-spraying with DMF.

On counterspraying with DMF, the intensity of the violet colour was generally increased and it lasted for 24 hours. However, DMF did not affect the yellow colour of iodine in the reference drug but increased it in the test drugs.

There were no significant differences (P>0.05 for each) between the Rf values of iodine and chloranilic acid chromogens of all the drugs.

The limits of detection for the drugs (reference ciprofloxacin, cipro®, ofloxacin) were 0.8, 1.2, and 1.6 mg/ml, respectively.

1,4-dioxane was used because of its low dielectric constant and because it appears not to compete with or shield the charge transfer process from donor to acceptor. This is necessary for the instant and stable colour formation at room temperature (25°C) [7]. The equation that led to the chromogen formation has been shown to be:

The complexes formed between the sigma- and pi-acceptors and the drugs (ciprofloxacin, cipro® and ofloxacin) in preliminary investigations in test tubes and under normal circumstances, were not stable. Stabilizing them by the use of DMF also failed. It is therefore not easy to quantitatively detect each of these drugs using the given sigma- and pi-acceptors. However, in the present study, the stability of these complexes on TLC plates offers an added advantage. This is because the drugs can be extracted from the silica gel with little interference from the acceptors used.

The greater stability of the TLC plates compared to that formed in the test tube is indicative of a possible physico-chemical interaction between complexes and the silica gel. It is therefore concluded that sigma- and pi-acceptors, though not easily applicable in the photometric detection of quinolones, can be applied for qualitative detection on thin layer plates. Apart from being easily applicable in developing countries where appropriate analytical equipment is usually unavailable, it is less cumbersome.

The authors wish to acknowledge the help of Marie-Therese Ngwa and Shuneba Irene Lemnwi.