Polydactyly with 6 or 7 digits bilaterally, or in all the four limbs at a time in certain cases was the principal finding amongst limb malformations in mice fetuses exposed to cyclophos-phamide in the dose of 10 mg /kg body weight on day 11 of gestation. Duplication of great toe was the most dominant. Augmentation of apoptosis by cyclophosphamide resulting in excessive programmed cell death in additional interdigital zones due to altered induction from apical ectodermal ridge (AER) with subsiquent early and fast destruction of AER and mesoderm deep to it were suggested as the probable mechanisms. Bilateral manifestation or involvement of all the four paws in multiple cases suggested , homogeneous effect of cyclo-phosphamide on the process of differentiation i.e. administration of critical dose at critical period of differentiation of toes.

Cyclophosphamide has been used, as a model teratogen by various workers in various experimental animals and limb defects is prominent among list of malformations. Although the precise mechanism of cyclophosphamide-induced changes still remains elusive, antimitotic action of cyclophosphamide was attributed initially to skeletal changes. The present study reports a novel observation that augmentation of apoptosis induced by cyclophos-phamide as the basic mechanism underlying the teratogenic effects of this drug.

Sexually mature Swiss white female mice weighing 16-36 g were used in the study. The female mice during their proestrous were caged overnight with the males of the same stock. (Female: Male = 1:1). The vaginal smear was examined next morning at 8 a.m. Presence of vaginal plug or spermatozoa in the smear was taken as the day “zero” of pregnancy. The pregnant animals were kept individually in separate cages after recording their weight. Cyclophosphamide in single dose of 10 mg per kg body weight was injected intraperitoneally at 8.00 a.m. sharp on day 11 of gestation. In the control group equal volume of normal saline was injected on day 11 of gestation. The pregnant mice were sacrificed with over dose of ether anesthesia on day 19 of pregnancy i.e. one day prior to full term. The uterine horns were exteriorized after open-ing the abdomen by midline incision. The sacs were in-spected and recorded for sites of viable fetuses and re-sorptions. The fetuses were removed from the uterus and were dried by wiping on a blotting paper. The weight of the fetuses was recorded. These were examined under dissecting microscope for external malformations

Polydactyly was principal finding of the malformations of limbs in the present study. Incidence of polydactyly was more in the hind limbs (65.51%) as compared to fore-limbs (52.63%) p<0.001 and the preaxial border involvement dominated showing double thumbs or great toe, the number of digits varied from 6-7. As seen in Fig. 1A-D, 2A-B) the polydactyly was observed at times in all the limbs or was bilateral either in hind or forelimbs. In most of the cases duplication of thumb/great toe was associated with bulky size of great toe. In certain case duplication of fifth toes was also observed (Fig 1C). In 25 cases all the pups of the whole litter showed polydactyly. In all cases it was 10 mg/ kg body weight dose. As seen in (Fig. 1A-B, 2A-B) the size of the hindlimb, which had polydactyly was bigger than normal. Polydactyly manifested as right side dominance in both upper and lower limbs. The length of the toe, which had duplicated i.e in most cases great toe and few cases with fifth toe, the length of the duplicated toes was smaller as compared to other normal toes. The interdigital cleft between duplicated toes was not fully separable in whole length showing only partial disappear-ance of web. Nails were not developed in the duplicated toes. However, the total bulk of duplicated toe specially of the first was much larger (Fig 2A). In certain cases having seven toes the interdigital web was not absent in its full extent. Syndactyly of these toes spared tips of the toes and nails. Many of the toes had anonychia. Other prominent malformations included rudimentary limbs and malrotated limbs besides digital anomalies (Table 1). Polydactyly among digital anomalies had not been a fre-quent finding in earlier reports in different animals (Table 2). 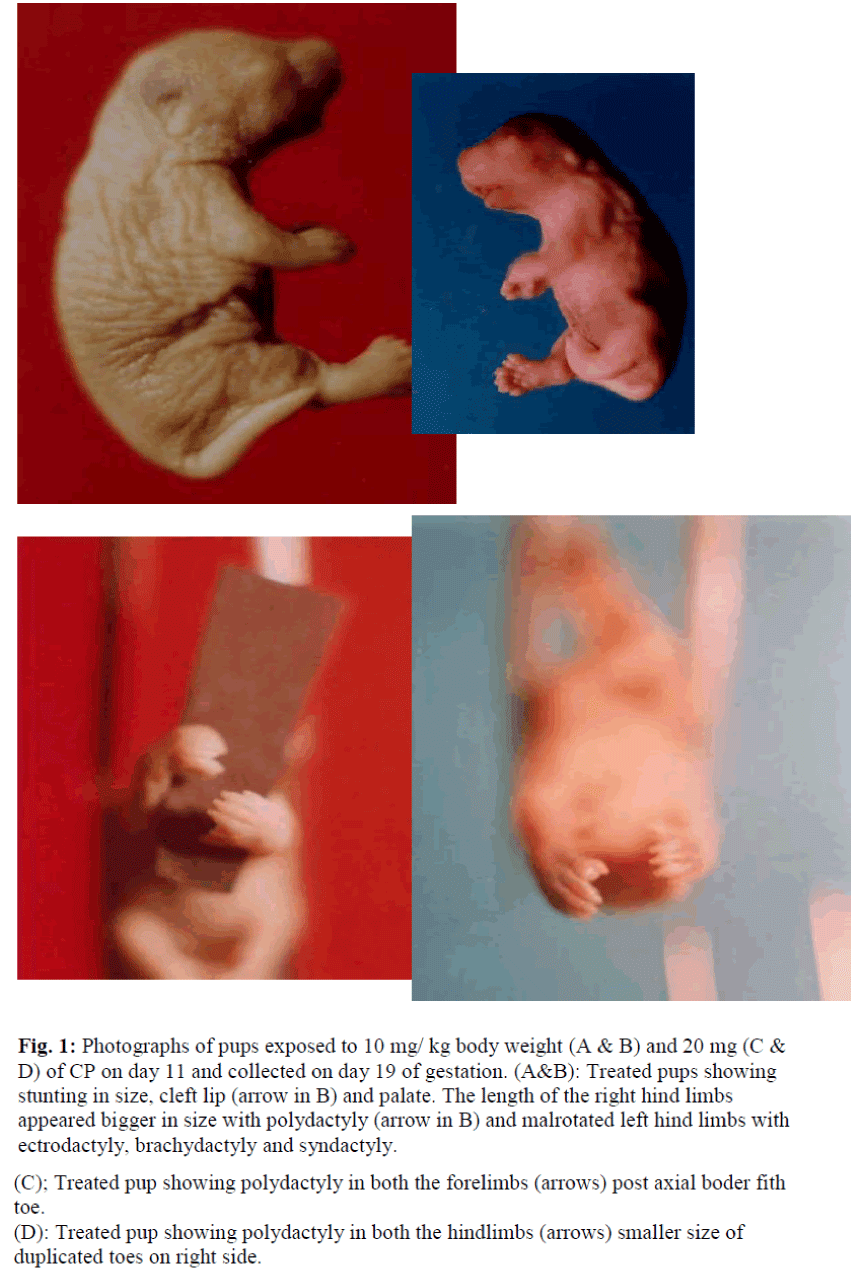 Fig. 1: Photographs of pups exposed to 10 mg/ kg body weight (A & B) and 20 mg (C & D) of CP on day 11 and collected on day 19 of gestation. (A&B): Treated pups showing stunting in size, cleft lip (arrow in B) and palate. The length of the right hind limbs appeared bigger in size with polydactyly (arrow in B) and malrotated left hind limbs with ectrodactyly, brachydactyly and syndactyly. 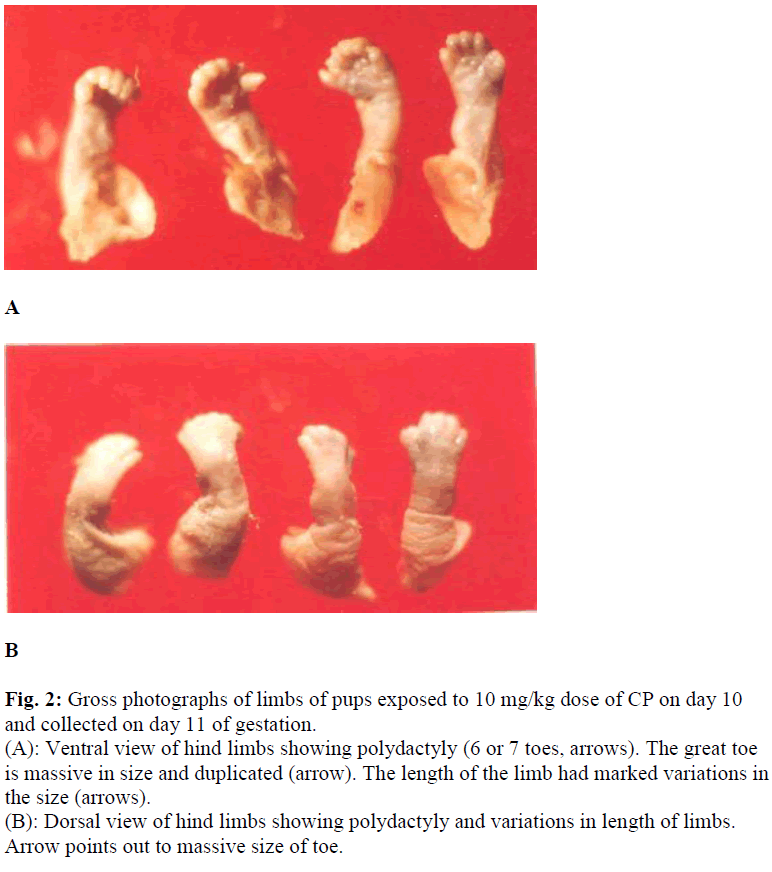 Fig. 2: Gross photographs of limbs of pups exposed to 10 mg/kg dose of CP on day 10 and collected on day 11 of gestation. (A): Ventral view of hind limbs showing polydactyly (6 or 7 toes, arrows). The great toe is massive in size and duplicated (arrow). The length of the limb had marked variations in the size (arrows). (B): Dorsal view of hind limbs showing polydactyly and variations in length of limbs. Arrow points out to massive size of toe. 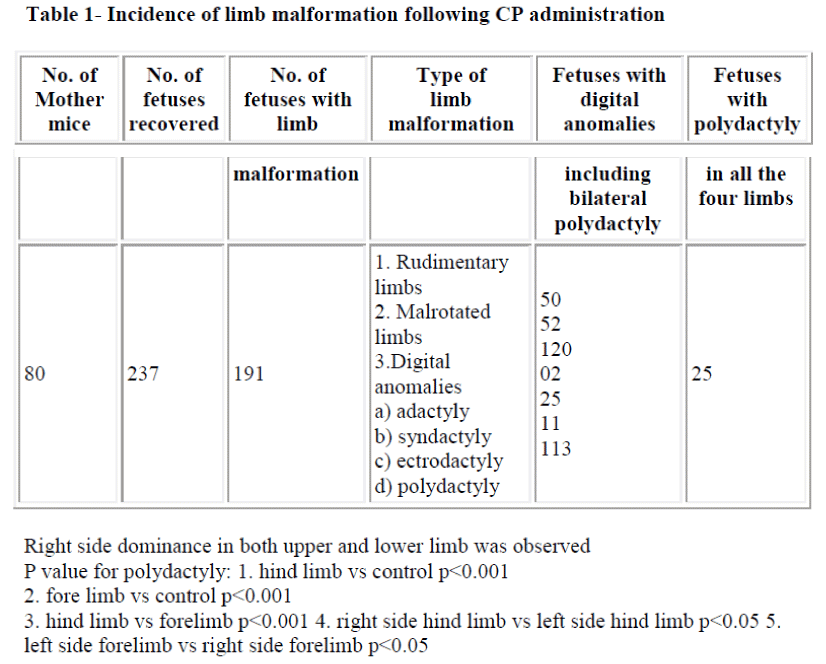 Table 2: Comparison of incidence of limb malformations with earlier reports

Polydactyly has been a conspicuous finding of the present work. It was observed in all the fetuses of a good number of litters, at a time in all the four limbs in 25 mice. Other workers have never reported such finding. The limb bud of rat lags behind that of mice by a period of 1½ day in its appearance and further differentiation [1-3] found the period between 11th and 12th day of gestation to be more sensitive for the production of digital anomalies in mice, supported by [4] and [5] who found the 12th day to be most sensitive period [6] reported 12th day of gestation as most sensitive day for producing digital anomalies. [7]) found the order of differentiation of the toes of the mouse as 4,5,3,2 and 1. The rate of apoptosis/programmed cell death if allowed to proceed normally will cause proper normal formation of the digits, till cyclophosphamide is administered. Administration of cyclophosphamide if coincides exactly with the differentiation of 2 or 1 toe which are the second last and last to differentiate, respectively, the augmentation of apoptosis will alter programmed cell death resulting in polydactyly as the apoptosis will effect both apical ectodermal ridge and the mesenchyme deep to it. Undue (excessive) cell death will cause removal of cells from within the mesoderm available for (say) the first toe dividing this into two rods causing its duplication. As seen in (Figs. 1B and D) smaller size of the duplicated toes suggest rapid apoptosis involv-ing ectodermal ridge of the region and mesoderm imme-diately deep to it for certain length of time. Bulkier size of these otherwise short duplicated toes suggest lesser im-pact of cyclophosphamaide on the rate of apoptosis after certain time interval sparing deeper mesoderm from on- slought of apoptosis. Preaxial border was affected the most. This explains the duplication of great toe as the most dominant finding. The number of digits varied from 6-7 bilaterally. Polydactyly has never been reported with more than six toes that too bilateral.