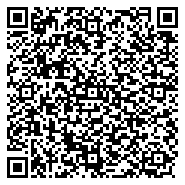 Peptic ulcer, most common disorder of the GIT has multifactorial causes in its pathophysiology and cannot achieve a complete eradication with a single drug hence search of drugs from various systems of medicines like ayurveda, siddha, unani is a common practice.

These results emphasize on the need to diversify alternative therapeutic approaches pertaining to herbal medicine. Wherein a single easily available plant may provide answer to several therapeutic challenges as observed in antiulcer activity shown by guduchi and jyeshthmadh.

Peptic ulcer is one of the major ailments affecting about 60% of human adults and nearly 80% of child population in tropical countries. Peptic ulcers one believed to develop because of an imbalance between aggressive factors like acid, pepsin, bile salts and defensive factors such as mucus, bicarbonate, blood flow, epithelial cell restoration and prostaglandin [1]. Most of the studies suggest that either the defect in antral-pylorus-duodenal motility or a general abnormal motility patterns permits duodenal contents to reflex into the stomach leading to damage to gastric mucosa [2].

Stress ulcers have been defined as acute ulcerations that is usually multiple and commonly located in gastric body and fundus which occur in majority of severely ill or injured patients. Patients at risk of developing stress ulcers are those who are severely ill with septicemia, shock, multiple trauma, burns, major surgery or multiple organ failure [3].

The marketed preparations of guduchi (Tinospora cardifolia) and jyeshthmadh   (Glycerrhiza   glabra) were procured from “Phadke distributors, Sangli” The preparations were in powder form and both the drugs are known to have antiulcer activity. Rabeprazole used in the experiment was obtained from F.D.C. Pharmaceuticals.

Healthy albino rats were taken and divided into groups. (Each group consists of 5 animals) for each pharmacological testing animal were divided into 4 groups.

Pylorus ligation: All the animals were fasted for 48 hours prior to dosing. The control group animals (Group I) were administered with calculated dose of 0.2% agar (500 mg/kg) The positive control group animals (Group IV) were dosed with Rabeprazole (500 mg/kg) in 0.2% agar. Test Group II and Group III animals were dosed with aqueous suspension of guduchi (Tinospora cardifolia) and jyeshthmadh (Glycerrhiza glabra) (500 mg/kg) in 0.2% agar respectively. Dosing was carried out 30 minutes prior to the procedure to be carried out for ulcer induction. Throughout the experiment water was provided ad libitum and food was withdrawn from the animals [8,9] (Figure 1). 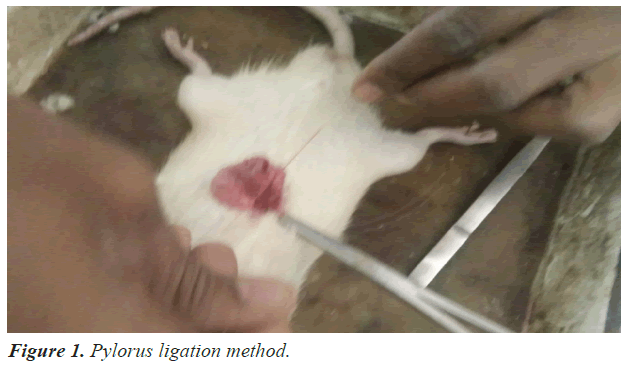 The rats were subjected to pylorus ligation under ether anesthesia 19 hours after pylorus ligation animals were sacrificed. Stomachs from the rats were removed carefully and cut along the greater curvature. The gastric content of each animal was emptied into graduated centrifuge tubes separately. The collected gastric content (gastric juice) was centrifuged at 1000 rpm for 30 minutes. The volume of gastric juice was measured and pH was determined. The total acidity was determined using supernatant liquid, with 0.01 N NaOH and expressed as m.Eq/l gastric juice [6,10].

Stomach of each animal was washed in distilled water.

The mucosal layer of the stomach was observed under magnifying lens and was checked for ulcers, Hemorrhagic areas or perforations [11].

The ulcer score was given as follows (Table 1).

All values represent mean ± S.D.; n=5 in each group; ANOVA P<0.001 for all parameters with control and positive control.

The rabeprazol treated group has shown the highest gastric content which is 6.1 ml as compare with jyeshthmadh 5.5 ml, guduchi 4 ml and control 7 ml as shown in Figure 2. Amount of gastric content secreted by stomach is directly proportional to hydrochloric acid released by parietal cells of stomach. And HCL secretion is responsible for ulceration produced on wall of mucosal layer.

Similarly the volume of gastric content, and total acidity value of guduchi (Tinospora cardifolia), jyeshthmadh (Glycerrhiza glabra), and rabeprazole treated group animals have significantly reduced (P<0.001) while pH was increased (P<0.001) when compared with control as per Figure 3. If more gastric content secrete it is indication of more acid secretion in stomach, due to ligation acid content won’t go further, it stay remain in the stomach pouch.

Guduchi has shown the highest increase in pH that is 4.8 where as jyesthmadh and rebeprazol has shown pH 4.2 and 4.3 respectively as compare to the control 3.1. (Figure 4).

In the ulcer score rabeprazole has shown slightly high ulcer score 1.6 as compare with guduchi 1.3 and jyeshthmadh 1.5 and with control 2.6. The guduchi (Tinospora cardifolia) and jyeshthmadh (Glycerrhiza glabra) treated group animals have shown significant reduction in all 3 parameters (volume of gastric content, total acidity in % m.Eq/l, ulcer score). Higher ulcer score means more ulceration has been produced to the epithelial layer of mucosa of stomach due to high secretion of HCL (Figures 5-9). 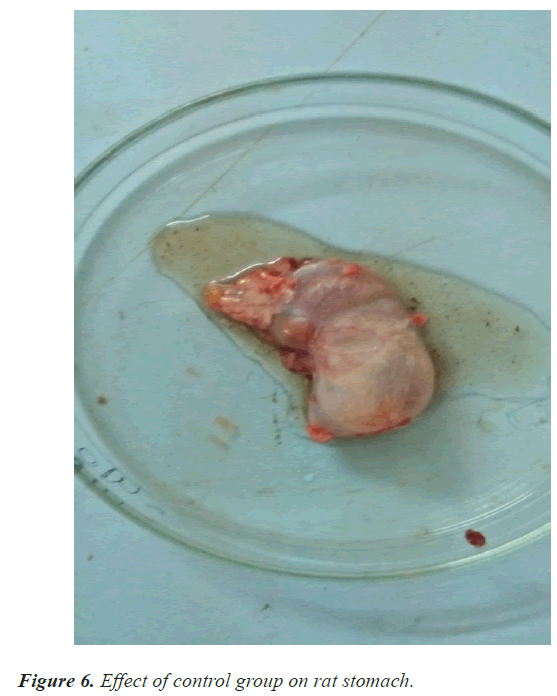 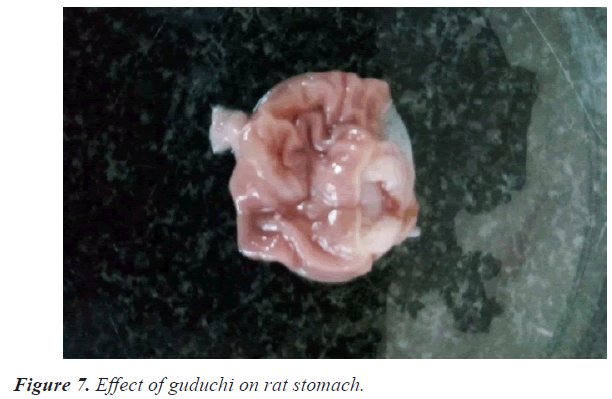 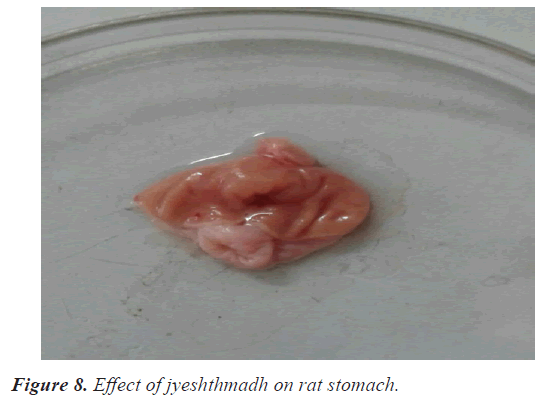 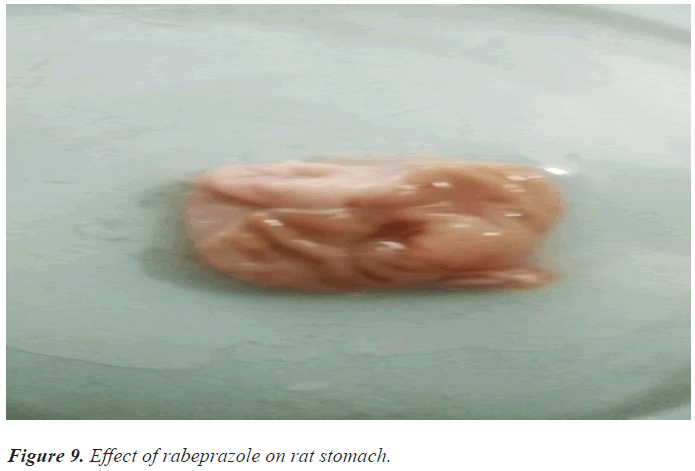 This indicates that guduchi (Tinospora cardifolia) may have more anti-ulcer activity than jyeshthmadh (Glycerrhiza glabra); so the study provokes the investigation to be carried out on the phytoconstituents of guduchi for isolation of a potent anti-ulcer molecule.

These results emphasize on the need to diversify alternative therapeutic approaches pertaining to herbal medicine. Wherein a single easily available plant may provide answer to several therapeutic challenges as observed in antiulcer activity shown by guduchi and jyeshthmadh. Hence the study supports the strong medicinal potential of herbal drugs.