#These authors contributed equally to this study

Parkinson's disease (PD) is a degenerative disease of the nervous system, mainly occurring in the elderly with long pathogenic path and high morbidity, and it’s the second most common neurodegenerative disease after Alzheimer's disease [1]. The etiology of PD is multifactorial and might involve in protein misfolding and aggregation [2], mitochondrial dysfunction [3], oxidative stress [4], or epigenetics [5]. DNA methylation is one of the most important epigenetic mechanisms, and studies in recent years suggest that PD might be related with the methylation. Jowaed et al. and Matsumoto et al. [6,7] found almost at the same time that the methylation levels of SNCA gene intron 1 in the cerebral substantia nigra, putamen, and cortical region of PD patients were decreased significantly, and the upregulation of certain genes were also accompanied during this process, resulting in the formation of insoluble Lewy bodies from a-synuclein via accelerating its aggregation and slowing down its degradation. However, Richter et al. [8] reported no significant difference in the methylation status of the peripheral blood leukocytes between PD patients and normal people, so no clear link between the methylation level of SNCA intron 1 and PD onset could be drawn, indicating there still exists controversies and needs further investigations about the correlations between the DNA methylation and PD. In Xinjiang, Uighur and Han people have different genetic backgrounds, and it has not been reported about whether there exists certain difference in the SNCA gene methylation between these two nationalities. This study started from another angle, namely the methylation of SNCA gene intron region 1 CpG Island, aiming to investigate its correlations with the incidence of EOPD.

According to the diagnostic criteria of BrainBank (UK) [9], 40 inpatients and outpatients (mean age 41.23 ± 5.27 y, 20 males and 20 females) treated in the department of neurology, The Affiliated Tumor Hospital of Xinjiang Medical University, from January 2010 to August 2013 and 40 healthy volunteers (mean age 44.13 ± 4.89 y, 20 males and 20 females) were included in this study. This study was conducted in accordance with the declaration of Helsinki. This study was conducted with approval from the Ethics Committee of Xinjiang Medical University. Written informed consent was obtained from all participants.

The QIAamp DNA Mini Kit (QIAGEN, Dusseldorf, Germany) kit was used to extract DNA from the blood samples, followed by quantification using a spectrophotometer; 100 ng of DNA was then performed electrophoresis using 0.8% agarose gel for the quality inspection, and the qualified DNA was then adjusted to 75 ng/µl, transferred into 384-well plates, and stored at -20°C for future use.

After treated with sulfite, the DNA sample was performed PCR amplification, alkaline phosphatase treatment, in vitro transcription, and RNase digestion as well as purification; the products were then loaded into the 384-spot SpectroCHIP (SEQUENOM, Santiago California, USA) and automatically detected and analysed using Mass ARRAY Compact System (SEQUENOM); the EpiTYPER software (SEQUENOM) was then used to analyse and output the results.

This study was one case-control study, so the experimental data were analysed using SPSS18.0 statistical package. The measurement data of the two groups were firstly tested the homogeneity of variance, and the data that met the criteria were then performed the t test, otherwise, the rank sum test was used for the comparison. 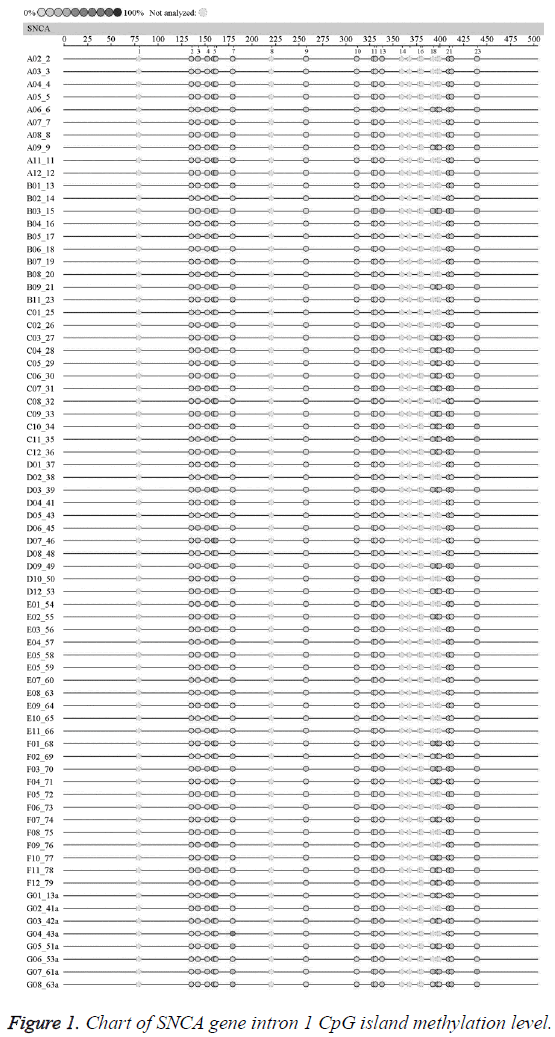 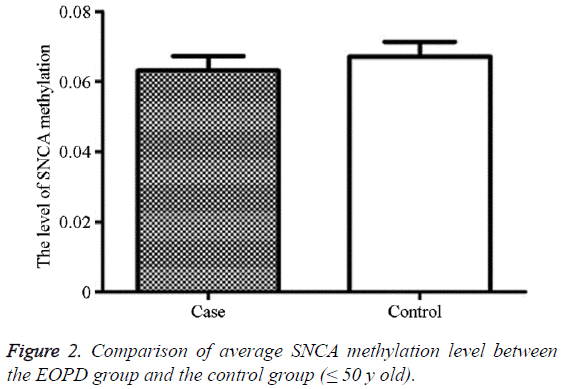 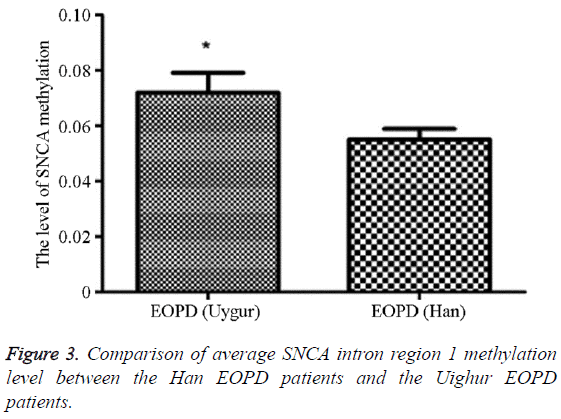 The reason of sporadic PD is still unclear, and currently it is generally considered as the result of the interactions of environmental factors and genetic susceptibility [10]. New evidence suggests that chronic environmental exposure could alter gene expressions through certain epigenetic mechanisms, and it might be a key factor for the delayed neurodegenerative diseases. Studies found the number of the DNA methylation sites increased with aging, and these changes might contribute to the aging process, as well as an important risk factor in the pathogenesis of PD, or they might be the stress responses appearing in the aging process. The whole genome research that determined the candidate gene methylation revealed the changes of the methylation status in the proximal DNA CpG island loci of the RAB7L1, GPNMB, and STX1B candidate genes. Maeda et al. [11] found the existence of subtelomeric DNA abnormal methylation in the peripheral blood cells of PD patients; therefore, it was speculated that in PD patients, oxidative stress caused subtelomeric DNA methylation disorder was closely associated with the degeneration of nerve cells. Studies had reported the DNA methylation abnormalities in neurological diseases. For example, the postmortem brain tissues of patients with AD [12,13], PD, Multiple Sclerosis (MS) [14,15] are due to abnormal disease-related gene DNA methylation. These results suggested that the DNA methylation status in the peripheral blood cells could become a biomarker of a number of neurological diseases [16,17].

Presently, certain studies had revealed that the diploid and triploid of SNCA gene and the missense mutation of A53T, A30P, and E46K were the pathological basis of the autosomal dominant forms of PD and Lewy Bodies (LB) [18-20]. Although the connections between the DNA methylation and the PD pathogenesis is still unclear, the methylation of SNCA gene might possibly cause structural changes or overexpress certain proteins, thus resulting in the protein aggregation, or involve in the pathogenesis of PD by gene expression disorders. The methylation of SNCA intron 1 had been confirmed to be able to reduce the SNCA transcription, and it was also found that in the cerebral substantia nigra of sporadic PD patients, the methylation level of SNCA intron 1 was reduced, which led to the increased expression of SNCA gene [6]. Therefore, it could be considered that the reduced SNCA gene methylation would increase the expression of SNCA gene, thus resulting in an increase in the production of α- synuclein and the following onset of PD.

Previous studies also suggested that different methylation levels of SNCA intron region 1 might be associated with the occurrence of EOPD [7], so our group further investigated the correlations of this methylation with the EOPD risks in Uighur and Han populations; the results showed that the average methylation level in EOPD patients was 6.31%, while that in the control group was 6.71%, and the difference was no statistically significant (P=0.998), consistent with Richter et al. [8] while different from Jowaed et al. [6], whose study found that the methylation level of SNCA intron 1 in the cerebral substantia nigra of PD patients was significantly reduced, but the former reported no significant difference in the methylation status of this fragment in the peripheral WBC between the PD patients and normal controls using the pyrophosphate sequencing technique, so the links between the SNCA intron 1 methylation level and the incidence of PD could not be identified. This might also be related with the confounding factor controlling in the study subjects; in addition, it is extremely difficult to obtain brain tissue samples from living people, so the above reports could not be confirmed by other studies. We also cannot rule out the impact of environmental factors on methylation and multi-center large sample validation was needed to verification. In order to further investigate the associations between the methylation level in this region and the PD susceptibilities in different ethnic groups, this study performed stratified analysis and comparison towards different nationalities, and found that the average methylation level in the Uighur EOPD group was 7,19% (1.89, 12.11), while that in the Han EOPD group was 5.51% (5.00, 13.00), statistically significantly lower than the methylation level in the Uighur EOPD group (P=0.020, OR (95% CI)=0.81 (0.03-3.35)), and it was considered to be caused by the fact that Xinjiang is located in Central Asia, so that the Uighur has different genetic backgrounds from Han, so the geographical and racial differences might result in the different results. The results of this study suggested that the hypomethylation of SNCA gene in PBMCs of the Uighur nationality might be a characteristic of sporadic Uighur PD patients. The results of this study indicated that the methylation of SNCA gene was not connected with the occurrence of PD in the Uighur population, especially those younger than 50 y old; however, whether the SNCA gene methylation in PBMCs of the sporadic Uighur and Han PD patients was related with PD still needed to be further investigated with larger sample sizes.

This study was supported by grants from Xinjiang Uygur Autonomous Region Science and Technology Supporting Project in Xinjiang (No. 201591160).

All authors have no conflict of interest regarding this paper.