To study the chemical constituents in leaves of Tripterygium wilfordii Hook F, and to explore the proapoptotic action of burselignan on SMMC-7721 cells and its molecular mechanism. Various chromatographic approaches were employed for separating chemical constituents, and compounds were structurally elucidated based on physicochemical properties and spectral data. Antiproliferative activity of burselignan on SMMC-7721 cells was detected by MTT assay, and burselignan's effects on Bcl-2, Bax and Survivin protein expressions were analyzed by Western blotting. Five compounds were isolated and identified, namely lyoniresinol, isolariciresinol, burselignan, dibutyl phthalate and daucosterol. Burselignan inhibited the proliferation of SMMC-7721 cells. Western blotting showed that burselignan could increase Bax expression, and decrease Bcl-2 and Survivin expression. Burselignan can significantly inhibit the proliferation of SMMC-7721 cells, and induce their apoptosis by regulating the expression of Bax, Bcl-2 and Survivin proteins.

Diterpenoids in Tripterygium wilfordii Hook F are abietane diterpenoids with α,β-unsaturated five-membered lactone ring and tri-oxygen structure, which have a variety of activities and are used for psoriasis, diabetes and rheumatoid arthritis [5-7]. Apoptosis, as an essential biological phenomenon, plays a vital role in maintaining body's homeostasis. Apoptosis is not only present in the normal tissues, but is also widespread in tumor tissues. Through research on apoptosis and its mechanism, researchers have found that tumor genesis, development and drug resistance are closely associated with apoptosis [8]. Tumor cell-specific induction of apoptosis has become one of the targets for oncotherapy research and a hallmark of evaluating tumor therapeutic efficacy, which can provide a reliable basis for the study of tumor treatments [9]. It has been reported that Tripterygium wilfordii can induce tumor cell apoptosis [10,11]; however, its mechanism of action is unclear yet. Therefore, we first studied the chemical constituents of Tripterygium wilfordii Hook F, and then examined whether monomer constituents could induce apoptosis in human hepatoma cells in vitro, and identified changes in some apoptosis-related factors, in order to explore the tumor cell apoptosis-inducing molecular mechanism of monomer compounds in Tripterygium wilfordii Hook F.

20 kg of Tripterygium wilfordii Hook F leaves were crushed, and extracted under heat reflux with 50% ethanol for 2 h three times. After evaporating to a small volume, the aqueous extract was defatted with petroleum ether, and then extracted with chloroform. The resulting chloroform extract was subjected to silica gel column chromatography (cyclohexane-ethyl acetate), further subjected to silica gel column chromatography, and gradient eluted with chloroform-methanol system to give fractions. Afterwards, the fractions were chromatographed on silica gel column, eluted with cyclohexane-acetone system, and separated through Sephadex LH-20 (with methanol-water as the mobile phase) and preparative liquid chromatography (with methanol-water as the mobile phase) to give five compounds.

Human hepatoma SMMC-7721 cells were provided by the Tumor Research Institute of Kunming Medical University, which were cultured in a 5% CO2 incubator at 37°C with saturated humidity in a 10% FBS-containing RPMI 1640 medium adherently in monolayer. Logarithmic phase cells with a density of 0.5×106~1×106/ml were used in the experiment.

Logarithmic phase cells were digested, collected, adjusted to a 5 × 104/ml single cell suspension, and seeded into 96-well plates. 24 h later, burselignan prepared with RPMI 1640 medium was added at final concentrations of 25.6 mg/L, 12.8 mg/L, 6.4 mg/L, 3.2 mg/L, 1.6 mg/L, 0.8 mg/L, 0.4 mg/L and 0.2 mg/L, respectively. In addition, a blank control group containing RPMI 1640 medium only and a negative control group that was concentration adjusted only while not given experimental treatment were set up. Each concentration had six replicate wells. After culturing for additional 24, 48 and 72 h, respectively, supernatant was discarded, and each well was added with 50 μl of MTT until the final concentration was 0.42 mg/ml, then mixed well, and incubated in a 37°C, 5% CO2 incubator for 4 h. Finally, supernatant was discarded, bluepurple granules were dissolved in DMSO, and absorbance (A value) of each well was measured at 570 nm with Ascent microplate reader. The experiment was repeated 2 times. IC50 was calculated by linear regression using SPSS statistical analysis software.

Viable cells in culture flasks were observed under Olympus 70 inverted microscope, and ultrastructurally observed under electron microscope. Cells were double fixed in 2.5% glutaraldehyde and 1% osmic acid, dehydrated with gradient ethanol and acetone, embedded in Epon 812 resin, sliced with an ultramicrotome, and double stained with sodium acetate and lead citrate, followed by observation and photography under TEM.

Cells were digested with 0.25% trypsin, blown, collected, centrifuged and washed in PBS twice, and then fixed in 70% cold ethanol. After removing ethanol by washing twice with PBS, the cells were added with RNase A (0.1 mg/ml), and allowed to stand at 37°C for 30 min. Afterwards, cells were stained with 1 ml of 50 mg/L PI for 30 min, and analyzed for DNA content and cell cycle with a flow cytometer using Cellquest software.

DNA fragments were collected referencing to literature [12], electrophoresed on a 1.2% agarose gel (50 V, 2 h), stained with EB, then detected and photographed with an automated electrophoresis gel image analyzer.

Compound 5: white powder. Hardly soluble in methanol, chloroform. After TLC and comparison with daucosterol standard, compound 5 was identified as daucosterol.

Inverted microscopic observation: Compared with the normal control cells, SMMC-7721 cells treated with 1.4 mg/L burselignan for 24 h and 48 h presented partial rounding, diminished volume, surface budding of a few cells, with buds either included in the juxtamembrane or protruded extracellular surface. Cells became irregularly shaped, and formed apoptotic bodies after bud detachment. Apoptotic bodies were circular or oval, within which highly condensed chromatins were visible (Figures 1A-1C). After treating for 72 h, increase in the number of apoptotic SMMC-7721 cells was observed. A small part of cells were detached, and floating in the culture medium. There were also a few cells which increased in volume, presenting swelling, rupture and necrosis-like morphology (Figure 1D). 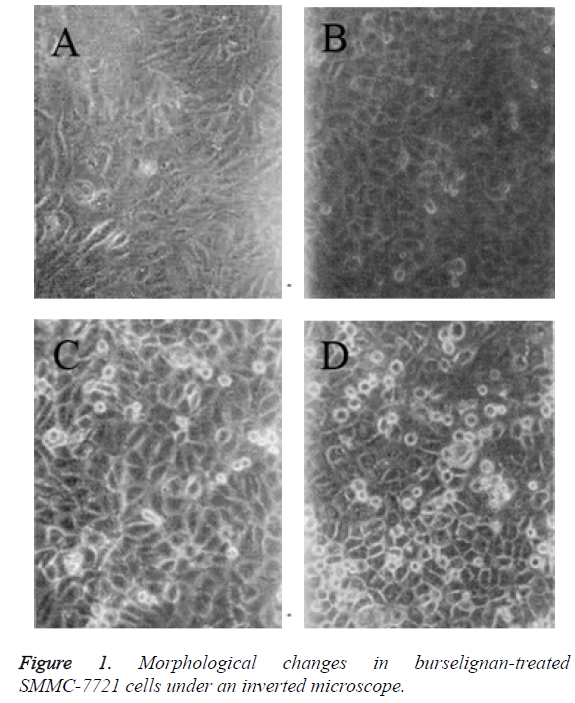 SMMC-7721 cells treated with 1.4 mg/L burselignan for 24, 48, 72 h, as well as blank control cells at corresponding time points were collected separately for flow cytometry. The results showed that the sub-G1 and G0 peaks lower than G1 phase DNA content were the apoptotic cells, apoptotic bodies, and necrotic cells and debris. With prolonged action of burselignan on SMMC-7721 cells, DNA contents of sub-G0 and G1 apoptotic peaks increased gradually, with 24, 48 and 72 h apoptosis rates of 7.2%, 9.7% and 27.7%, respectively. G2 and M phase cell percentages were 35.7%, 52.2% and 47.3%, while those for blank control cells at corresponding phases were 15.2%, 12.4% and 16.7%, respectively.

Flow cytometry combined with Annexin V-FITC labeling results showed that proportions of apoptotic SMMC-7721 cells were low after treating for 24 and 48 h with 1.4 mg/L burselignan, which were 5.3% and 6.1%, respectively. At 72 h, proportion of apoptotic cells increased to 22.1%. This further confirmed the strong apoptosis-inducing effect of burselignan on SMMC-7721 cells.

When SMMC-7721 cells were treated with 1.4 mg/L burselignan for 72 h, apoptosis-specific ladders appeared as the apoptotic cell DNAs were degraded into regular fragments. At 120 h, most cells were necrotic. The necrotic cells appeared as a continuous membrane-like band because of the irregular degradation of their DNAs, while the genomic DNA bands of normal viable cells stayed in the vicinity of loading well due to high molecular weight and short migration distance.

SMMC-7721 cells treated for 24, 48 and 72 h with 1.4 mg/L burselignan were collected, as well as blank control cells, all of which were extracted for total proteins to detect the expressions of apoptosis-related proteins bcl-2, Bax and Survivin. The results showed that over time, Bax expression gradually increased, while bcl-2 and Survivin expressions decreased gradually (Figure 2). 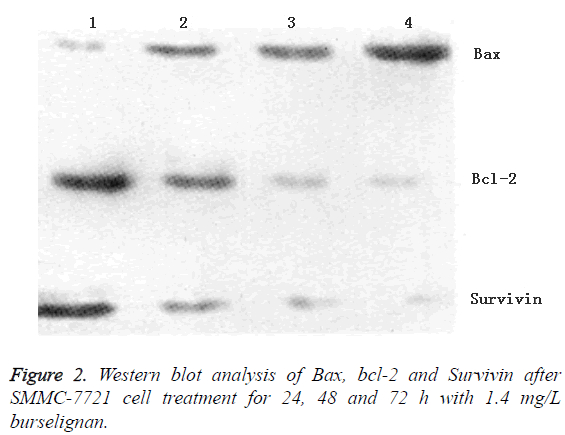 Apoptosis is an initiative cell death process regulated by genes, which is influenced and constrained by external factors as well. With the deepening of research on tumor molecular biology, it has been recognized that tumor occurrence and development are not only associated with the proliferation and differentiation abnormalities of tumor cells, but are also associated with abnormal regulation of apoptosis. Therefore, induction of tumor cell apoptosis has become a novel therapeutic direction.

Apoptosis is a complex biological process involved by multiple genes, where bcl-2 family plays an important role [17]. Members of bcl-2 family have a dual function, of which bcl-2, bcl-XL, etc. inhibit apoptosis, while Bax, bcl-XS, etc. promote apoptosis [18]. Bcl-2 gene encodes a protein with relative molecular mass of about 26,000. High bcl-2 protein expression can protect cells from death, so bcl-2 is believed to be an apoptosis-related gene having a significant anti-apoptotic effect. Bcl-2 can block the final pathway of apoptosis induction, which plays a cytoprotective role by preventing damaged DNA from being translated into signals of genes involved in apoptosis or by blocking the activity of these gene products. Composed of 192 amino acids, Bax gene encodes a protein with relative molecular mass of 21,000, which inhibits bcl-2 or bcl-XL activity by forming homodimers with itself or heterodimers with bcl-2, bcl-XL, and thereby plays a proapoptotic role. Structural characteristics and interactions between Bax and bcl-2 proteins closely link the two within cells, that is, regulation formed by bcl-2 or Bax heterodimers is a vital aspect of apoptosis regulation [19]. Bcl-2 and Bax protein levels are directly related to the apoptosis regulation; increasing bcl-2 inhibits apoptosis, whereas increasing Bax promotes apoptosis. Our study found that after treating SMMC-7721 cells with burselignan, bcl-2 protein expression decreased, while Bax protein expression increased. This indicates that burselignan may induce SMMC-7721 cell apoptosis by altering the regulatory equilibrium of bcl-2 and Bax heterodimers.

Our study also found decreased protein expression of antiapoptotic gene Survivin after treatment of SMMC-7721 cells with burselignan. Survivin, as a recently discovered antiapoptotic protein, belongs to the Inhibition of Apoptosis Protein (IAP) family, which is by far the most effective antiapoptotic protein. Survivin gene encodes a cytoplasmic protein comprising 142 amino acids with relative molecular mass of approximately 16,200. Survivin has a conserved Baculoviral IAP Repeat (BIR) domain at the N-terminal, which is the main motif playing a direct role in inhibiting the activation or catalytic reaction of apoptotic executors caspase-9, caspase-3, caspase-6 and caspase-7; meanwhile, Survivin lacks Ring zinc finger at the C-terminal, which helps enhance its antiapoptotic function [20]. Furthermore, Survivin expression is positively correlated with bcl-2; both Survivin and bcl-2 genes are regulated by GC-rich promoters without TATA box; either transcription or activation can enhance cell proliferation, so the two can synergistically exert antiapoptotic effect [21]. Apoptosis-inducing mechanism of burselignan may be through inhibition of caspase-3 and caspase-7 activities in the apoptosis pathway downstream by inhibiting the expression of antiapoptotic protein Survivin.