The present study was undertaken to evaluate the osteogenic effect of Cervi cornu pantotrichum (CCP) on bone marrow stromal cells (BMSCs) which showed differentiation towards the osteoblastic phenotype. Cells were exposed to different culture medium (dexamethasone group, CCPE group and control group). The activities of osteoblastic markers such as alkaline phosphatase (ALP), bone gla protein (BGP) and bone morphogenetic protein-2 (BMP-2) were detected by Elisa. Cell proliferation was measured by MTT assay. The bone nodule formation was measured with alizarin red stain. Data anlysis showed that CCPE had significantly promoted proliferation of BMSCs in the first three days and stimulated the BMSCs differentiate into osteoblast. Calcium nodule was found after 18days. This results demonstrate that CCPE has a stimulatory effect on bone formation and maight be a useful remedy for the treatment of bone diseases such as osteoporosis.

Cervi cornu pantotrichum, the yong unossified antler of male deer, has been one of the most prized health tonics in traditional oriental medicine for over 2,000 years. As it has a unique natural model of rapid and complete bone regeneration, CCP has received increasing attention because of its possible role in bone formation. Zhou et al. showed that a polypeptide from deer velvet accelerates fracture healing in laboratory mice by stimulating bone and cartilage formation [1]. The growth factor of deer antler enhanced the proliferation and differentiation of human alveolar osteoblast cells. Chloroform extract of deer antler inhibited osteoclast differentiation and bone resorption [2]. Bone regeneration is promoted by osteoconduction mechanisms; osteoinduction and osteogenesis. Bone marrow stromal cells (BMSCs) have long been recognized as the source of osteoprogenitor cells [3]. However, whether Cervi cornu pantotrichum aqueous extract is able to influence BMSCs has not been reported. The current study is to determine the effect of CCPE on the proliferation and differentiation of BMSCs.

Sixteen female SPF Sprague-Dawley (SD) rats weighing 200-220g were randomly divided into two groups. All the animals were purchased from Liaoning Changsheng biotechnology co., LTD (China), and housed in a room at temperature of 21-25, relative humidity of 50%-60% and a 12h light/12h dark cycle. Animals had free access to pellet food and tap water. Eight rats were given CCPE solution (0.4g/kg) by gavage once a day for 8 days and the others received water instead. Blood was aseptically obtained from the abdominal aorta 2h after the last administration. Serum was acquired by blood centrifugation at 3000 rpm for 10 min and then filtered twice with 0.22μm cellulose acetate membrane. The bottled serum was calefied in 56℃ water for 30 min, and then stored at -20℃ for use.

BMSCs (NO.RASMX-01001, Cyagen, USA) were resuscitated at 37 ℃, and cultured in α-MEM supplemented with 10% FBS, 100U/mL penicillinstreptomycin at constant temperature of 37℃ in 5% CO2.Thereafter, cell culture medium was changed fresh medium every 3 days.

The cells (4×104) were seeded, in triplicate, in 96-well plates. Cultured cells were exposed to different medium.

The α-MEM containing 10% serum of normal rat, 100U/mL penicillin-streptomycin was used for the control group. The α-MEM containing 10% FBS, 10-8 mol/L dexamethasone, 50μg/mL ascorbic acid and 10 mmol/L β- Glycerophosphate was used as the positive group. The α- MEM containing 10% serum containing CCPE, 100U/mL penicillin-streptomycin was used for CCPE group. After being cultured for 24h, 48h, 72h respectively, BMSCs were supplemented with 10μL MTT(5g/L), and incubated for another 4h. Then the supermatant was discarded by aspiration and 100uL DMSO was added to dissolve the dark blue crystal formazan thoroughly. The absorbance was measured at 570 nm by multifunctional microplate reader (TECAN Infinite M200, Austria).

The cells (2×104) were seeded in 24-well plates in three copies, treated with the three medium which was said above for 6d, 12d, 18d, washed twice with PBS, digested with 0.25% trypsin, frozen and thawed three times, then centrifuged at 3000 rpm for 10 min at 4. The ALP, BGP, BMP-2 activities were assayed with commercial kits. The absorbance was read at 450nm by multifunctional microplate reader.

BMSCs were seeded in 24-well plates at a density of 2×104 cells/well. After treatment with different medium for 18days, cells were fixed with phosphate buffered formalin and then stained with 40 mM alizarin red solution for 30 min. After washing the wells with pure water, the plates were photographed.

All of the data were expressed as mean values ± Standard deviations. Statistical analysis was performed with oneway analysis of variance (ANOVA) using SPSS 16.0 software. The arithmetic means, standard deviations (SD) and 95% confidence intervals were calculated for each experimental group.

Proliferation and differentiation of BMSCs

As seen in Fig.1 A, the number of the cells grown in 10% serum containing CCPE was significantly higher than those in control group and positive group at each time point (p<0.05). This result showed that CCPE had such functions as promoting proliferation of BMSCs. The stromal cells isolated from bone marrow can be induced by dexamethasone to differentiate into cells possessing the characteristics of mature osteoblast [4]. Bone formation required three essential steps such as osteoblast differentiation, matrix maturation and matrix mineralization [5] and was characterized by cellular expression and synthesis of bone marker proteins for matrix maturation and by extracellular matrix mineralization triggered by calcium deposition [6]. ALP was the transporter protein binding with calcium, and it could promote the cell maturation and calcification. BGP was the necessary factor for bone calcification. ALP and BGP were the markers in the differentiation in the early stage and middle stage [7]. BMP-2 is well known as one of the most powerful osteogenesis promoting proteins[8-11]. During osteoblast differentiation, BMP-2 was bound with 2 types of serine / threonine kinase receptors-BMPR Type I and Type II- initiated the BMP signaling pathway subsequently[12-15]. Firstly, BMP gave the signal to activate receptor-regulated Smads (R-Smad; Smadl, Smad5, and Smad8), and regulated target genes such as OPN, BGP, ALP, and Runx2. The research found that ALP activities in both CCPE group and the dexamethasone group were notably higher than that in the control group (Fig.1B, p<0.05). The BGP activities in dexamethasone group were higher than both CCPE group and control group (Fig.1C, p<0.05). The BMP-2 activities in CCPE group was significant higher than those in dexamethasone group and control group (Fig.1D, p<0.05).This study demonstrated that serum containing CCPE not only enhanced proliferation of BMSCs but also promoted the BMSCs to differentiate into osteoblast. Further research will be necessary to assess the effect of CCPE on bone regeneration and therapeutic potential in bone formation in a model in vivo. 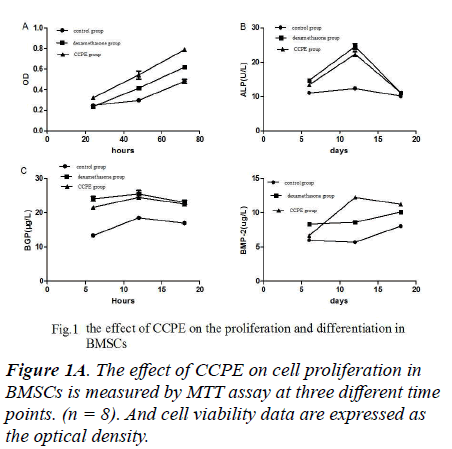 Figure 1: The effect of CCPE on cell proliferation in BMSCs is measured by MTT assay at three different time points. (n = 8). And cell viability data are expressed as the optical density.

Figure 2: Mineralization of the BMSC?s after staining with Alizarin red

After 18days, cultures were mineralized visually with alizarin red staining as shown in Fig. 3. The BMSCs cultured in both dexamethasone group and CCPE group have differentiated into osteoblasts. They are stained with dark alizarin red in extracellular and intracellular areas. That was to say there were more mature osteoblasts in dexamethasone group and CCPE group than the cells in control medium. The morphology of these cultures strongly also suggests that cells have undergone an osteoblastic differentiation.

As shown in Fig 1B, on 12th days, the osteoblasts treated both with dexamethasone and CCPE have significantly higher activity of ALP than that in the control group (P<0.05). There is no significant difference between osteoblasts in differentiation group and pilose anlter group (P>0.05).

The Fig.1 C shows that the BGP activities in both CCPE group and dexamethasone group are significantly higher than that in control group (P<0.05).

The Fig.1 D shows that on the 12 th, 18th days, the BMP- 2 activity in CCPE group is significantly higher than that in differentiation group and the control group (P<0.05).

This work was supported by the National Science Foundation of China (No.30973881).