This is a cross-sectional study. Hearing loss and its complications appear to be increasingly common in elderly people. Hearing impairment is becoming increasingly prevalent in old age and unfortunately many physicians do not view hearing loss as a significant problem and like the patient, often attribute it to normal aging. The aim of this study was to determine the prevalence of hearing loss and its association with type 2 diabetes mellitus (T2DM) in elderly people in a newly developed society. Ear Nose Throat (ENT) and Endocrinology outpatient clinics of the Hamad General and Ru-meilah Hospitals, Hamad Medical Corporation. All subjects aged more then 50 years who were visiting the Endocrinology and ENT outpa-tient clinics of the Hamad Medical Corporation with hearing difficulty were included in this study during the period from January 2003 to November 2006. During this study period, prevalence, hearing, audiological test, family history and medical problems associated with hearing impairment in old patients were recorded. The hearing loss was evaluated using two audiometers Grason Stadler GSI 61 and Madsen Orbiter 922. The prevalence of hearing impairment was higher among men (52.6%) than in women (49.5%). Also, hearing impairment was higher in Qataris (66.3%) than in non-Qataris (33.7%). 40.5% of the studied subjects were consanguineously married couples. Very se-vere (71- 90 dB) and profound (90 ? 120 dB) cases were found more in men (13.8% & 9.3%) than in women (10.2% & 8.2%). The associated risk factors were higher in men such as T2DM (37.8% & 25.5%), hypertension (37% vs 27%), retinopathy (31.7% vs 19.9%), Nephropathy (25.6% vs 17.9%), Neuropathy (22.8% vs 14.3%) than in women. There was a statistically significant relationship between both the genders in all the risk fac-tors. The study findings revealed that the prevalence of hearing loss was higher in elderly men than in women. Elderly individuals with hearing loss were likely to have T2DM and other risk factors like hypertension, retinopathy, nephropathy and neuropathy.

Hearing loss is a common consequence of aging [1-5]. It is difficult to distinguish changes of normal aging from those of other contributing factors. Hearing impairment is one of the most important health problems of the elderly above 60 years [1-7]. It has been reported that hearing loss ranks as the third-most-prevalent major chronic dis-ability in elderly and the prevalence of hearing loss has been documented very well by several authors [1-5,7-21].

Unfortunately, hearing impairments often receive mini-mal attention. Hearing loss can affect the most common and simple tasks of daily life [5-9]. The relation between hearing loss and other various health conditions and ac-tivity limitations among older people is well documented [1-17], but no any study has been conducted on this topic in the oil-rich Arabian Gulf Countries.

The aim of this study was to determine the prevalence of hearing loss and its association with type 2 diabetes melli-tus in elderly people in a newly developed Arabian soci-ety.

This is a cross-sectional study design which was con-ducted during the period from January 2003 to November 2006 in the outpatient clinics of the Hamad Medical Cor-poration. The study target population included all pa-tients aged 50 years and above who were visiting endo-crinology outpatient clinic and referred to the ENT clinic for screening. Over all, out of 1,000 subjects, 836 (83.6%) subjects gave consent to participate in the pre-sent study. 16.4% who did not participate was due to in-ability to attend the scheduled appointments, lost follow-up, lack of time and lack of interest. Data were recorded on consanguinity, family history of hearing impairment, T2DM, retinopathy, nephropathy, and neuropathy from patients’ medical records.

Persons were classified as diabetic if they were currently taking diabetic medication. We studied all subjects diag-nosed for type T2DM in accordance with the established diagnostic criteria by American Diabetes Association [18-19]. The degree of blood sugar level in our patient popu-lation was 10.61± 3.26 (mean± S.D).

All patients were tested by pre-trained technicians using two clinical digital audiometers (Garson Stadler GSI 61 and Madsen Orbitar 922 which are regularly calibrated to international standards) in a quiet room. Hearing impair-ment was defined as the inability to hear a tone of 40 dB or grater at 2,000 Hz frequency in the better ear. This conservative cut point was chosen because 2,000 Hz falls within the auditory frequency range most important for speech discrimination. Hearing loss evaluation described as follows: normal (<25 dB); mild (26-40 dB); moderate (41-55 dB); severe (56-70 dB); very severe (71-90 dB); profound (91-120 dB); and deaf (no hearing).

Fisher exact and chi-square tests were used to compare frequencies between two or more than two categorical variables. The level p<0.05 was taken as the cutoff value for significance.

Table 1 shows the socio-demographic characteristics of the studied elderly subjects above 50 years and the preva-lence of hearing loss by gender. Majority of the studied male and female patients were in the age group (50 – 59) (43.4% vs 51.3%). Over 55% of the studied patients were using mobile phones frequently. The consanguineous marriages were observed higher in males (45.2%) than in females (38.5%). The prevalence of hearing impairment was higher among males (52.6%) than in females (49.5%). 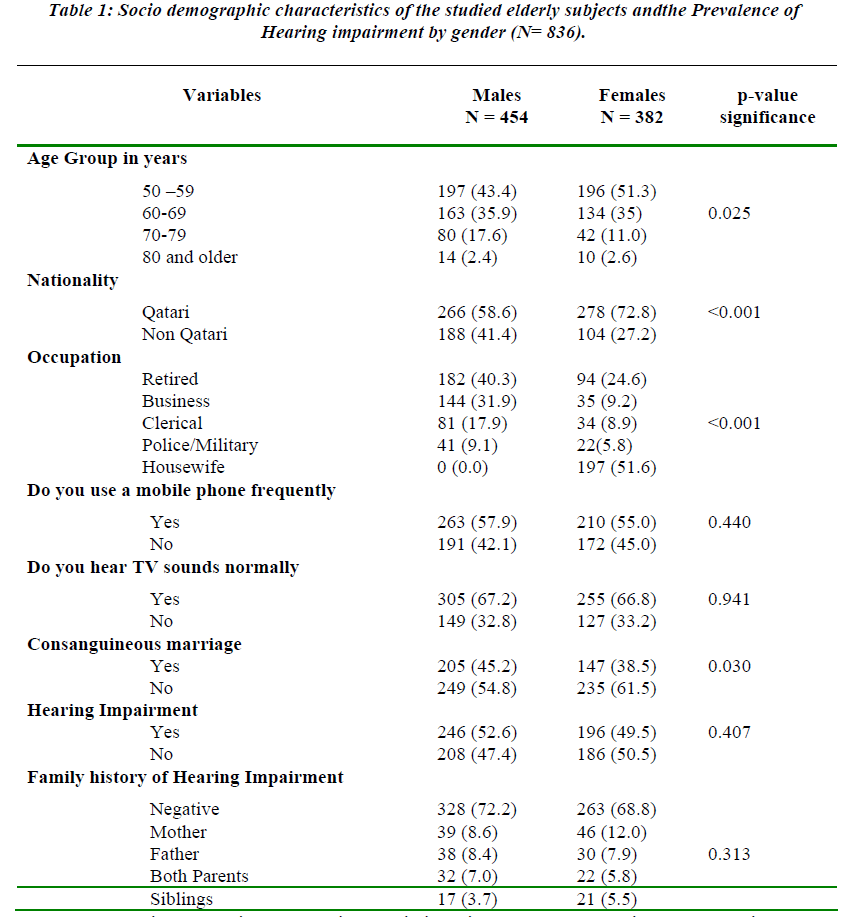 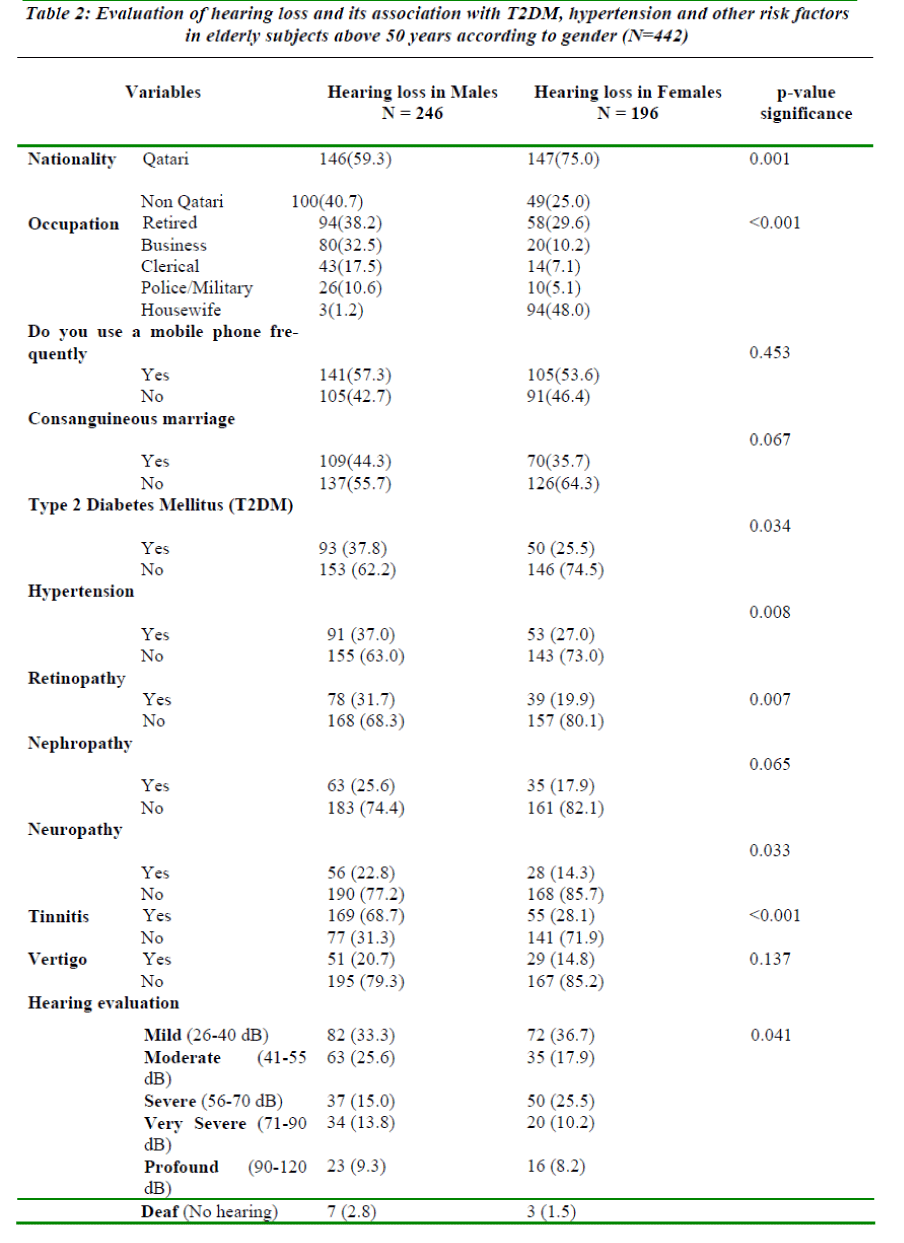 Figure 2: Evaluation of hearing loss and its association with T2DM, hypertension and other risk factors in elderly subjects above 50 years according to gender (N=442).

Figure 3: Patterns of the conventional audiometric curves in the studied patients by gender.

Hearing loss among elderly population is a prevalent problem that affects their ability to understand speech in quiet, noise, and reverberation. Elderly people also ex-perience difficulty in understanding rapid speech, heavily accented English language, and speech with few contex-tual cues and/or added memory demands. Hearing prob-lems have a profound influence on the lives of the elderly. Although hearing loss in the elderly may not have a cure, early rehabilitation helps to restore better quality of life, if the problem is detected early.

The prevalence of hearing impairment in the studied sub-jects was higher in males (52.6%) than females (49.5%). Nearly half of the studied elderly patients suffered from hearing loss which is similar to the findings in some other studies [1-8,10-17]. Although comparisons of prevalence rates are difficult because of different methods of assessment and age grouping, the findings of this study are consistent with rates reported elsewhere [1-4,6-8,14-15].

Hearing impairment is the fifth most prevalent chronic health condition and the second most prevalent impair-ment in the United States16. Both men and women are at risk for age-related hearing loss. Very severe and pro-found cases were found more in men than in women. Also, deafness was more prevalent in men. It is reported in the US that women of all ages have better hearing than men at frequencies above 2000Hz [22].

Histopathological studies have shown damage to the nerves and vessels of the inner ear of individuals with diabetes [23]. One population-based study [24] has evaluated the association between diabetes and hearing loss. A number of clinical studies have investigated the possible association of diabetes mellitus and hearing loss [25]. Audiometric data obtained in this study revealed that hearing became worse as blood sugar increased in subjects. Also, in our study, a good proportion of the subjects with hearing loss were diabetic (32.4%) and hypertensive (32.6%).

Other associated risk factors in our elderly subjects with hearing loss were tinnitus (50.7%), retinopathy (26.5%), nephropathy (22.2%), neuropathy (19%) and vertigo (18.1%). All the associated risk factors were higher in men and there was a statistically significant relationship in all the risk factors between men and women except for vertigo and nephropathy. A study done by Dalton et al. [26] reported that individuals with T2DM and nephropa-thy were more likely to have hearing loss. The associated complaint of tinnitus was very high in elderly patients with hearing loss. The endolymphatic hydrops complaint was not very common in elderly patients (1.4%).

Noise exposure was a main environment factor which was frequently associated with sensorineural hearing loss in our study population. Many elderly people accept their hearing loss, believing there is no effective treatment; other attribute it to the aging process or even deny its ex-istence. Unfortunately many physicians do not view hearing loss as a significant problem and like the patient, often attribute it to normal aging. As reported in many studies, the present study show a strong association be-tween hearing loss and diabetes mellitus in elderly people [28-30].

There are some limitations to our study that must be ac-knowledged. Firstly, although the total sample size was appropriate to estimate the prevalence in the population, the desired level of precision was not always obtained for some of the estimates in the age and sex groups. Sec-ondly, despite the acceptable response rate in hearing (83.6%), the prevalence of hearing loss may have been overestimated assuming that those not examined may have been less likely to be suffering from impaired hear-ing or vision. Thirdly, study was carried out hospital population based sample of Qatari’s population with spe-cial socioeconomic characteristics so that we cannot ex-trapolate the results to the whole population of the coun-try. Finally, this study highlights the need to target intervention programmes for prevention of hearing impair-ment to elderly people and those with little or no educa-tion as the high-risk groups.

The study finding revealed that the prevalence of hearing loss was higher in men than in women. Also, the hearing impairment was higher in Qataris than in non-Qataris . Nearly half of the studied subjects were consanguineously married couples. Also, the results provided an additional evidence that hearing impairments is associated with dia-betic mellitus type 2 and have significant negative impact on quality of life older persons. Sloping audiometric curves were found to be the most prevalent ones in eld-erly subjects, followed by flat audiogram shape.

The project was supported and funded by the Diabetic Association and Qatar Foundation for generous support and help while this project conducted.