Patients with type 2 diabetes have an increased prevalence of lipid abnormalities, contribut-ing to their high risk of cardiovascular diseases (CVD). This study is an attempt to evaluate the diagnostic value of Glycated haemoglobin (HbA1c) in predicting diabetic dyslipidemia. Venous blood samples were collected from 294 type 2 diabetic patients. The whole blood and sera were analyzed for HbA1c, fasting blood glucose (FBG) and lipid profile panel test. Dyslipidemia was defined as per the National Cholesterol Education Programme (NCEP) Adult Treatment Panel (ATP) III guidelines. Diabetes was defined as per American diabetes association criteria. The statistical analysis was done by SPSS statistical package version 13.0.In our present study 92 (80.70%) females out of 114 and 150 (83.33 %) males out of 180 were found to be dyslipidemic. HbA1c demonstrated positive and significant correlations with total cholesterol (TC), low density lipoprotein cholesterol (LDL-C), high density lipopro-tein cholesterol (HDL-C) and LDL-C ratio, non-HDL-C and TC/HDL-C ratio. Patients with HbA1c value > 7.0% had significantly higher value of TC, Triacylglycerol (TAG), LDL-C, LDL-C/HDL-C ratio, non-HDL-C and TC/HDL-C ratio as compared to the patients with HbA1c ≤ 7.0%. However, there was no significant difference in value of HDL-C between two groups. HbA1c can be used as a potential biomarker for predicting dyslipidemia in type 2 diabetic patients in addition to glycemic control.

Diabetes mellitus is a group of metabolic disease charac-terized by hyperglycaemia resulting from defects in insu-lin secretion, insulin action, or both. Diabetes causes about 5% of all deaths globally each year. The chronic hyperglycaemia of diabetes is associated with long-term damage, dysfunction, and failure of various organs, espe-cially the eyes, kidneys, nerves, heart, and blood ves-sels.50% of people with diabetes die of cardiovascular disease (primarily heart disease and stroke). [1,2].

Diabetic patients with accompanied (but often unnoticed) dyslipidemia are soft targets of cardiovascular deaths. Patients with type 2 diabetes often exhibit an atherogenic lipid profile, which greatly increases their risk of CVD compared with people without diabetes. An early intervention to normalize circulating lipids has been shown to reduce cardiovascular complications and mortality. [3,4].

Glycated hemoglobin (HbA1c) is a routinely used marker for long-term glycemic control. In accordance with its function as an indicator for the mean blood glucose level, HbA1c predicts the risk for the development of diabetic complications in diabetes patients[2].Apart from classical risk factors like dyslipidemia, elevated HbA1c has now been regarded as an independent risk factor for CVD in subjects with or without diabetes. Estimated risk of CVD has shown to be increased by 18% for each 1% increase in absolute HbA1c value in diabetic population [6]. Posi-tive relationship between HbA1c and CVD has been demonstrated in non-diabetic cases even within normal range of HbA1c [7-10]. The aim of this study was to find out association between glycaemic control (HbA1c as a marker) and serum lipid profile in Nepalese type 2 diabetic patients.

A total of 294 type 2 diabetic patients (180 males and 114 females) visiting the OPD of Civil Service Hospital, Kathmandu,Nepal from October 2009 to May 2010 were included in this study. Venous blood samples were col-lected from all the subjects after at least 8 hours fasting. The Serum was later used for analyzingFasting Blood Glucosse ( FBG), Lipid Profile Panel Test-Serum Total cholesterol(TC),HDL-cholesterol(HDL-C), Triacylglyc-erol (TAG),Risk ratio (TC/HDL-C) by using Mindray BA-AT 80 (Human Diagnostics Reagents, Germany) and Indirect LDL-cholesterol and Non-HDL Cholesterol(Non HDL-C) was calculated by Friedwald and Frederickson formula.HbA1c was estimated by using Ion exchange chromatography (Crest A Coral clinical system,USA).

For serum lipid reference level, National Cholesterol Education Programme (NCEP) Adult Treatment Panel III (ATP III) guideline was referred. According to NCEP-ATPIII guideline, hypercholesterolemia is defined as TC>200 mg/dl, high LDL-C when value >100 mg/dl, hy-pertriglyceridemia as TAG >150 mg/dl and low HDL-C when value <40 mg/dl. Dyslipidemia was defined by presence of one or more than one abnormal serum lipid concentration. Diabetes was defined as per American Diabetes Association (ADA) criteria. The data were evaluated by SPSS statistical package version 13.0. Pear-son’s correlation test was performed to examine various correlations. Independent samples t-test (2-tailed) was used to compare means of different parameters. Value of HbA1c was given as percentage of total haemoglobin and values of all other parameters were given in mg/dl. All Values are expressed as mean ± standard error of mean. The results were considered non-significant when P > 0.05.

Among total 294 type 2 diabetic individuals included in this study, 180 were male and 114 were female. The mean age ± SEM of male and female subjects were 62.72±10.24 and 55.86 ± 12.08 years respectively. The mean value of HbA1c and FBG were slightly higher in females in comparison to male patients but the differences were not significant. Among the circulating lipids, TC and LDL-C were significantly higher (P<0.05) in females patients. Although the mean level of TAG was slightly lower and of HDL-C slightly higher in females than males, these differences were statistically non-significant (Table 1). 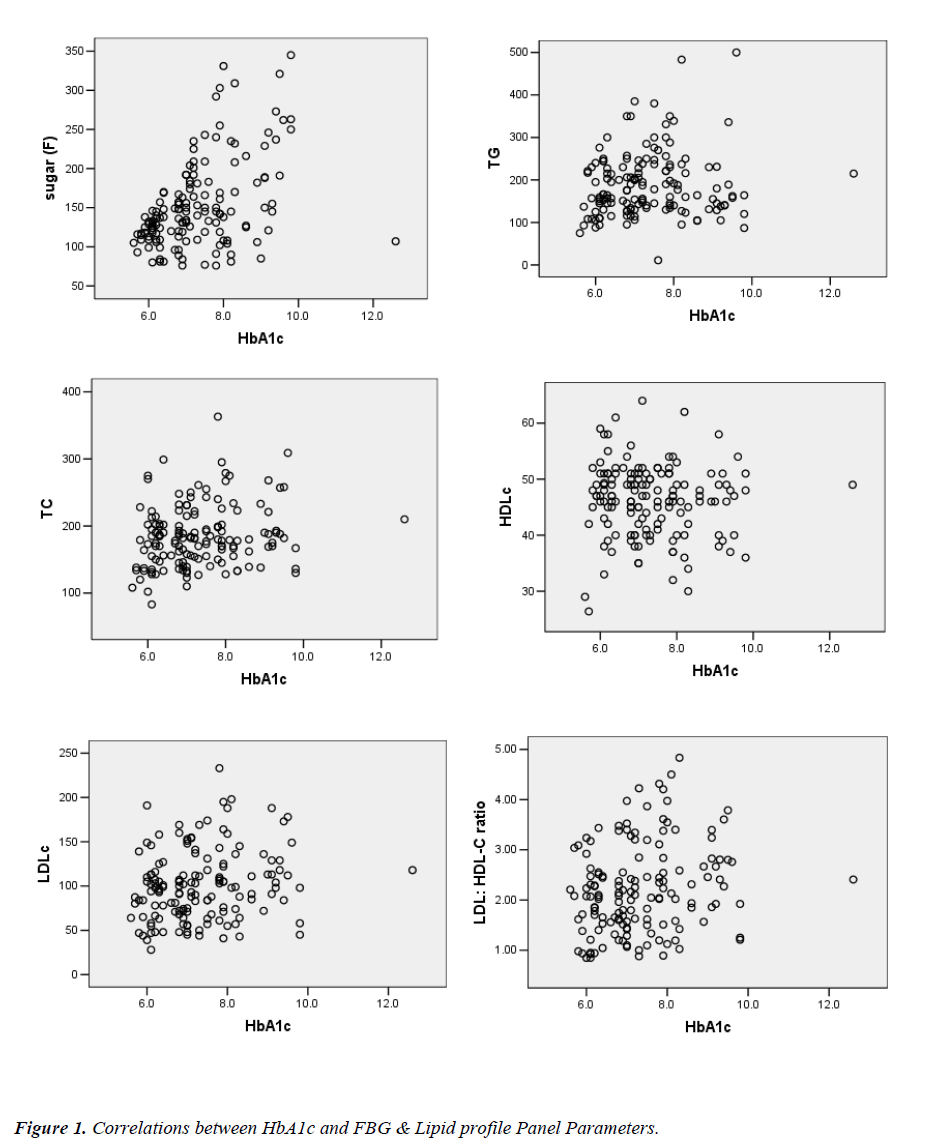 In the present study, we have evaluated the pattern of lipid profile parameters in diabetic subjects and its corre-lation with HbA1c. The levels of HbA1c and FBG did not differ significantly between male and female. Although there were no significant difference in TAG and HDL-C levels between male and female, the levels of TC and LDL-C were significantly higher in female as compared to male type 2 diabetic patients. This finding is in agree-ment with the previous studies [11-16]. Hy-perlipidemia in females may be attributed to the effects of sex hormones on body fat distribution, which leads to differences in altered lipoproteins [17].

This study reveals high prevalence of hypercholes-terolemia, hypertriglyceridemia, high LDL-C and low HDL-C levels which are well known risk factors for car-diovascular diseases. Insulin affects the liver apolipopro-tein production. It regulates the enzymatic activity of lipoprotein lipase (LpL) and Cholesterol ester transport protein. All these factors are likely cause of dyslipidemia in Diabetes mellitus [18]. Moreover, insulin deficiency reduces the activity of hepatic lipase and several steps in the production of biologically active LpL may be altered in DM [19]. The main disorder in lipid metabolism was hypertriglyceridemia in our study. This finding is in con-cord with our previous study [20]. In the study of Sehran et al in Pakistan, 54% diabetic individuals had elevated LDL-C and > 50% individuals had increased TG. These findings are similar to our study. But in contrast to our present study, they reported low HDL-C in 73% individu-als.

A highly significant correlation between HbA1c and FBG in our study is similar with various previous studies[21-23]. We also observed significant correlations between HbA1c and TC, LDL-C and LDL-C/HDL-C ratio. In various studies, HbA1c level was eminent as showing positive correlation with TC, LDL-C and TAG in diabetic patients[24-26]. Our study also showed a significant cor-relation between HbA1c and non-HDL-C (P=0.009). Non-HDL-C was shown to be the stronger predictor of CVD in diabetic population by ‘The Strong Heart Study’ (data evaluated by Lu et al), with hazard ratios of 2.23 and 1.80 respectively in male and female[27]. This study showed that increasing Non-HDL cholesterol concentra-tions had significant, curvilinear relationships with CVD and CHD risk (P <0.001). Moreover, NCEP ATPIII has recommended using Non-HDL cholesterol in assessing CVD risk in patients with diabetes. The correlation of HbA1c with non-HDL-C was found to be more signifi-cant than correlation of HbA1c with other lipid parame-ters except for LDL-C/ HDL-C and Risk ratio in our study. The measurement of Non-HDL-C is simple which can be conducted even in non-fasting state of patients and can be determined regardless of TAG concentration. Hence, Non-HDL cholesterol can be of great value in de-termining dyslipidemia in diabetic subjects. Risk ratio showed the strongest correlation with HbA1c in our study. In the prospective cohort study with inclusion of 418 Type 2 diabetic individuals with follow-up until the appearance of a cardiovascular event, Gimeno-Orna JA et al[28], showed that the main lipid predictor of vascular events was mean TC/HDL-C ratio with hazard ratio (HR) of 1.46. In the same study, the predictive power of the TC/HDL ratio was found to be higher than that of Non-HDL cholesterol and study concluded that TC/HDL-C can be used as a treatment guides for diabetic dyslipide-mia. Total number of apo-B containing particles and small LDL-C Particles are increased in diabetes and these metabolic abnormalities are better reflected by TC/HDL-C ratio and Non-HDL-C than LDL-C alone [29,30]. Significant association of HbA1c with various lipid pa-rameters, Non-HDL-C, LDL-C/ HDL-C ratio and TC/HDL-C ratio in present study suggests the importance of glycemic control in order to control dyslipidemia.

The Diabetes complications and control trial (DCCT) es-tablished HbA1c as the gold standard of glycemic control. The level of HbA1c value ≤7.0% was said to be appropri-ate for reducing the risk of cardiovascular complica-tions[31]. In the present study, we divided diabetic pa-tients into 2 groups as per the HbA1c cutoff of 7.0%. The diabetic patients with HbA1c value > 7.0% exhibited a significant increase in TC, LDL-C, TAG, LDL-C/HDL-C ratio, Non-HDL-C and Risk ratio without any significant alteration in HDL-C in comparison to patients with HbA1c value ≤7.0%. Khan HA et al [32] showed the impact of glycaemic control on various lipid parameters in which the diabetic patients were categorized into 3 groups according to their HbA1c levels: group 1, good glycaemic control (HbA1c<6%); group 2, poor glycaemic control (HbA1c >6%–9%) and group 3, worst glycaemic control (HbA1c>9%). Though there was no significant differences in LDL–C in 3 groups with regard to glycae-mic control, alterations in other lipid parameters were statistically significant in three different groups. Severity of dyslipidemia increases in patients with higher HbA1c value. As elevated HbA1c and dyslipidemia are inde-pendent risk factors of CVD, diabetic patients with ele-vated HbA1c and dyslipidemia can be considered as a very high risk group for CVD. Improving glycaemic con-trol can substantially reduce the risk of cardiovascular events in diabetics [33]. It has been estimated that reduc-ing the HbA1c level by 0.2% could lower the mortality by 10% [34].

Significant correlation between HbA1c and various circu-lating lipid parameters and significant difference of lipid parameters in two groups (≤7.0% and >7.0%) of glycated hemoglobin indicates that HbA1c can be used as a poten-tial biomarker for predicting dyslipidemia in type 2 dia-betic patients in addition to glycemic control hence early diagnosis can be accomplished through relatively inex-pensive blood testing.

The authors are grateful to Mr. Anil Singh Basnyat and all the staff at the Clinical Bio-chemistry Laboratory, Civil Service Hospital, Kathmandu Nepal for their co-operation and skillful technical assistance.