Antimicrobial effects of various methods for the disinfection of contaminated toothbrushes

The oral cavity forms an environment that various germs can inhabit. The dental plaque is a sticky glycoprotein film on the tooth surface, which is covered with oral bacteria, and there are approximately more than 500 kinds of bacterial aggregates. In the beginning, there are many cocci and filamentous fungi, but spirochetes and vibrios appear over time [1]. For this reason, the dental plaque should be removed instantly, and tooth brushing is recommended as the most effective and economical way of preventing oral diseases [2].

Tooth brushing is the most common method of oral hygiene management that plays an essential role in preventing dental caries and periodontal disease by removing the dental plaque on the tooth surface and appropriately stimulating the gingiva [3]. However, since toothbrushes of healthy or diseased persons contain a large number of pathogenic microorganisms, they can cause respiratory, gastrointestinal, cardiovascular, and kidney problems [4]. Moreover, the bristles contaminated with microorganisms resulting from daily use may cause a problem that can lead to oral infection [5]. One toothbrush has millions to billions of germs, and contamination occurs from the initial use of the toothbrush [6]. The more it is used repeatedly, the more it will be at risk for contamination [7].

According to the study of Verran [8], the total number of bacteria isolated from the toothbrush was 4 × 108 CFU/ml, thereby showing various distributions of bacteria, including staphylococci 64%, coliforms 57%, pseudomonads 28%, and yeast 39%. Toothbrushes can be contaminated from storage environments, hand hygiene, air, and storage container [9]. In general, toothbrushes are stored primarily in a bathroom, which is an environment with a high contamination level due to the intestinal bacteria in the air [10]. Toothbrush disinfection is essential for oral cleaning and hygiene management of toothbrushes, along with physical health [11].

Therefore, this study aims to investigate the antimicrobial effect of a UV toothbrush sterilizer and various disinfectants on the toothbrush, urge the general public in recognizing the necessity of toothbrush disinfection, prevent oral diseases by disinfecting the toothbrush in a simple and cost effective way, and provide effective and proper toothbrush management methods.

This study was conducted on 20 female college students in Gangwon province, who had no special medication history within the last six months. The sample was composed randomly allocated to I~IV group. The study purpose and methods were explained to the subjects, and the subjects, who gave their consent to the experiment, were instructed to brush their teeth for four weeks with the toothbrush provided by the research team.

20 toothbrushes collected from the 5 groups were immersed in 10 ml of brain heart infusion (BHI, Sigma-Aldrich Co., St. Louis, Mo, USA) broth for 2 min to suspend and isolate S. mutans. For each group, 1 ml was inoculated into the BHI agar solid medium. The colony forming unit (CFU) was measured and quantified after culturing at 37.5°C for 24 h.

The data produced in each experiment were analyzed by using the SPSS 19.0 program (SPSS Inc., Chicago, USA). In order to compare the effect among the groups, one-way ANOVA was performed, and Scheffe’s method was used as a post hoc test. The statistical significance was set at 0.05.

The result of the number of bacteria in the mouth is shown in Figure 1, and when the CHX and PVI disinfectants were applied, there were no oral bacteria, thereby indicating the most remarkable antimicrobial effect. 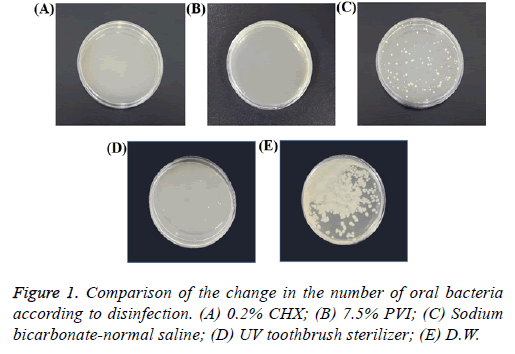 Figure 1: Comparison of the change in the number of oral bacteria according to disinfection. (A) 0.2% CHX; (B) 7.5% PVI; (C) Sodium bicarbonate-normal saline; (D) UV toothbrush sterilizer; (E) D.W.

Table 1. Comparison of the amount of oral bacteria in each disinfectant.

There is a growing interest in oral hygiene management for a healthy oral environment. The toothbrush is the most common tool used to improve the oral health of an individual. Tooth brushing removes dental plaque, massages the gums, and maintains cleanliness in the mouth, thereby playing an important role in the prevention of dental caries and periodontal diseases [18].

The degree of toothbrush contamination varies depending on how the toothbrush was stored after daily use, and the toothbrush can be highly contaminated by microorganisms according to oral conditions, environment, hand hygiene, aerosol contamination, and storage container [19]. The toothbrush is generally stored in the bathroom, and bacteria grow well under such a humid and warm condition [20]. Therefore, the importance of storing and disinfecting the toothbrush after use is further emphasized. In this study, the antimicrobial effect on the toothbrush was investigated, and as a result, the antimicrobial effect was found to be greater in the order of CHX, PVI, UV toothbrush sterilizer, and sodium bicarbonate-normal saline. It was confirmed that various methods of toothbrush disinfection are very helpful in preventing toothbrush infection or cross-infection, and CHX and PVI disinfectants are the most effective methods for sterilizing harmful microorganisms that remain in the toothbrush.