Icariin is recognized as the major bioactive component of Herba Epimedii. The aim of this study was to evaluate the anti-fatigue properties of icariin using a weight-loaded forced swimming test. The mice were randomly divided into four groups, a control group and three icariin treatment groups. The icariin treated groups received different doses of icariin per os (100, 200 and 400 mg/kg of body weight/per day) for 4 weeks, while the control group received equal amount of distilled water. After 4 weeks, exhaustive swimming times and some biochemical parameters related to fatigue were measured. The data showed that icariin could prolong exhaustive swimming times of mice, which was accompanied by increases in blood glucose, hemoglobin and glycogen levels, and decreases in blood lactic acid (BLA) and blood urea nitrogen (BUN) levels. Overall, these results suggest that icariin possesses anti-fatigue properties.

Fatigue is defined as a feeling of exhaustion and an inability to perform daily activities and work-related tasks at the level of one's normal abilities [1]. It can be divided into two categories: physical fatigue caused by such activities as forced exercise or swimming; mental fatigue caused by sleep deprivation etc. [2]. Physical fatigue is also called peripheral fatigue, and may be accompanied by deterioration in performance [3]. Several factors have been identified, which induce physical fatigue during exercise [4-6]. First, exercise promotes the consumption and depletion of energy sources such as glycogen. Second, exercise causes the production and accumulation of metabolic products such as lactic acid and ammonia in the body and third, intense exercise can produce an imbalance between the body’s oxidant and anti-oxidant systems, i.e., the accumulation of reactive free radicals, which puts the body in a state of oxidative stress that is injurious or harmful for the body. To date, pharmacological drugs or therapies used for treating fatigue have not been quite effective. So, people are becoming more interested in natural components that can not only help to improve athletic ability, postpone fatigue and accelerate the elimination of fatigue in human beings, but also have fewer side effects [2]. Several previous studies have shown that supplementation with some natural components such as saponins, capsaicin, stearoyl, capsiate, salidroside, polyphenols,small peptides and polysaccharides can elevate the endurance capacity and facilitate recovery from fatigue [7-10].

Herba Epimedii (Yinyanghuo in Chinese), the aerial parts of plants of the Berberidaceae family including Epimedium grandiflorum Morr, Epimedium brevicornum Maxim and Epimedium sagittatum (Sieb. et Zucc) Maxim, is one of the most famous Chinese herbal medicines listed in the Pharmacopoeia of the People’s Republic of China [11,12]. For thousands of years, Herba Epimedii has been widely used in China in the treatment of cardiovascular diseases, infertility, impotence, amnesia, lumbago, arthritis, numbness and weakness of the limbs. [13]. Several of its components have been studied, but icariin (Figure 1), a glycoside of prenyl flavones, was identified as the major bioactive components of Herba Epimedii. Recently, icariin has been demonstrated to have a wide range of pharmacological and biological activities, including estrogenic activity, antioxidant effects, anti-tumor activity, immunoregulation, neuroprotection and enhances sexual function [14]. 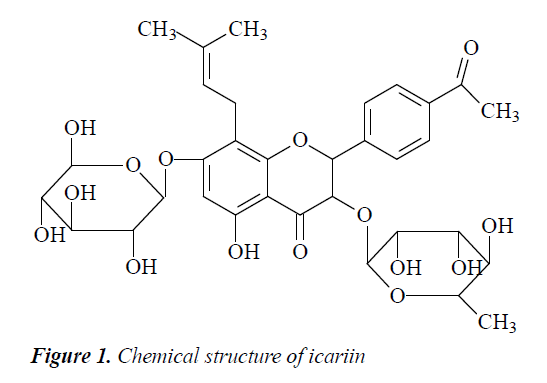 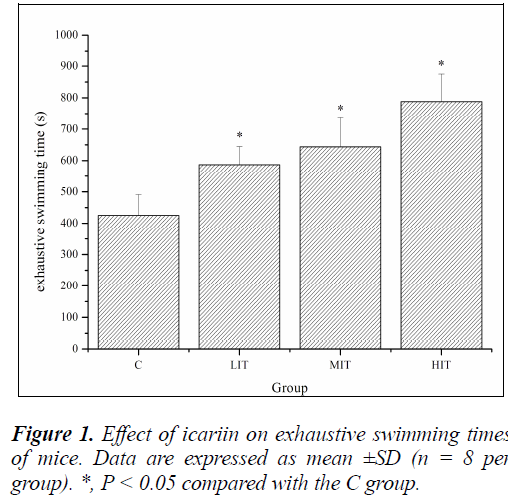 Studies have also shown that icariin is a concentration- dependent chemopreventive protecting DNA from radical-induced damage and also exerts anti-osteoporotic effects [15-17]. To date, no systematic studies have been carried out to evaluate the anti-fatigue properties of icariin.

Therefore, this study is aimed to determine the effect of icariin on physical fatigue using a weight-loaded forced swimming test.

Male Kunming mice, weighing 18-22 g, were purchased from the Animal Department of Institute of Traditional Medical and Pharmaceutical Sciences (Beijing, China). Animals were kept under controlled environmental conditions of temperature (22 ± 1°C), relative humidity (50 ± 5%) and a 12 h light/dark cycle, and were maintained on standard food pellets (purchased from Xincaihong Feed Co., Ltd., Beijing, China) and tap water ad libitum. Animal treatment and maintenance were conducted in accordance with the Principles of Laboratory Animal Care (World Health Organization Chronicle, 1985) and with the Animal Care and the User Guidelines of University of International Business and Economics, China.

Forced swimming test was applied in this study to evaluate the anti-fatigue properties of icariin. Thirty minutes after the last treatment, eight mice were taken out from each group and submitted to weight-loaded forced swimming till exhaustion. The test was carried out in an acrylic plastic pool (50 cm × 50 cm × 40 cm) with 30 cm deep water maintained at 25 ± 1 °C. The tail of each mouse was loaded with a bundle of lead pieces, which was 7% of its body weight [3,7]. Exhaustion was determined by observing the loss of coordinated movements and failure to return to the surface within 10 s [3,18-20], and the exhaustive swimming time was immediately recorded.

Thirty minutes after the last treatment, the remaining eight mice were taken out from each group for estimating biochemical parameters related to fatigue analyses. Mice were forced to swim for 90 min without loads. After resting for 60 min, the mice were anesthetized with ether and whole blood samples were collected in tubes by heart puncture. Blood samples were placed for about 1 h at 4 °C and centrifuged for 10 min at a speed of 3000 rpm. The supernatant was collected for use. In addition, immediately after the blood was collected, the liver and gastrocnemius muscle were collected to be made into 10% homogenates with normal saline at 4 °C as soon as possible. Blood glucose, BLA, BUN, Hb, liver glycogen and muscle glycogen were measured according to the recommended procedures provided by the commercial assay kits.

All statistical analyses were performed with SPSS software (SPSS, Version 14.0, SPSS Inc., Chicago, IL). The data were expressed as mean ± SD. ANOVA with Bonferroni post-hoc test was used for multiple comparisons between groups. P values of < 0.05 were considered to be statistically significant.

Effect of icariin on exhaustive swimming times of mice

A direct measure of anti-fatigue effect is the increase in exercise tolerance. Forced swimming test is an experimental exercise model to evaluate physical fatigue. It works well for evaluating the endurance capacity of mice Anti-fatigue properties of icariin [21]. To standardize the workload and reduce the swimming time, weights at specific body weight percentages were added to the chest or tail of the animal [22]. In this study, the mice had weights attached to their tails, which were equivalent to 7% of their body weights, all through the duration of the swimming till exhaustion. As shown in Figure 1, exhaustive swimming times of mice in the LIT, MIT and HIT groups were significantly prolonged compared with that in the C group (P < 0.05), and the increases in ratios were 37.95%, 51.38% and 85.25%, respectively. The results indicated that icariin could elevate exercise tolerance and had anti-fatigue effects.

Effect of icariin on blood glucose levels of mice

Glucose, a breakdown product of tissue glycogen, is released as a circulating substrate for energy utilization after intense exercise [23]. The homeostasis of blood glucose plays an important role in prolonging endurance exercise [24]. Continuous exercises often lead to hypoglycemia and can suppress the active functioning of the brain. Therefore, the amount of blood glucose can illustrate the speed and degree of fatigue development [25]. As shown in Figure 2, blood glucose levels of mice in the LIT, MIT and HIT groups were significantly increased compared with that in the C group (P < 0.05), and the increases in ratios were 24.25%, 49.17% and 54.15%, respectively. The results indicated that the blood glucose regulating ability of icariin was certainly related to improvements in exercise tolerance and resistance to fatigue. 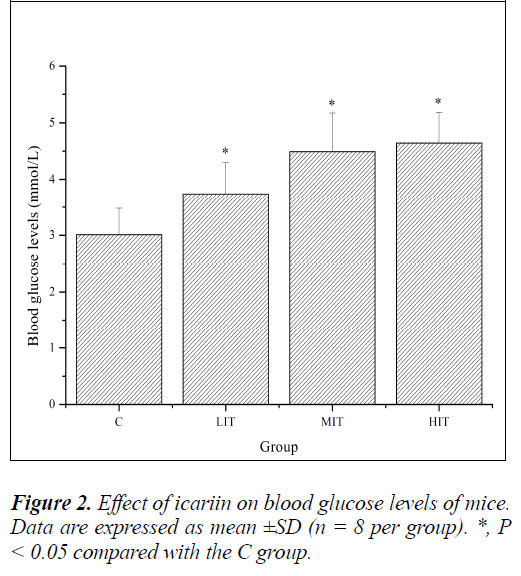 Effect of icariin levels on BLA of mice

During high-intensity exercise, muscles produce large amounts of lactic acid to generate enough energy by anaerobic glycolysis. The increased lactic acid level further reduces pH value, which induces various biochemical and physiological side effects, including glycolysis and phosphofructokinase and calcium ion release, through muscular contraction, that are harmful for the body’s performance [26]. If any medicine could inhibit the accumulation of lactic acid and/or accelerate its clearance, then it might have an anti-fatigue effect. So, blood lactic acid (BLA) is one of the important indicators for estimating the degree of fatigue. As shown in Figure 3, BLA levels of mice in the LIT, MIT and HIT groups were significantly decreased compared with that in the C group (P < 0.05), and the decreases in ratios were 18.74%, 26.58% and 55.12%, respectively. The results indicated that icariin effectively delayed the increase of BLA and ameliorated fatigue. 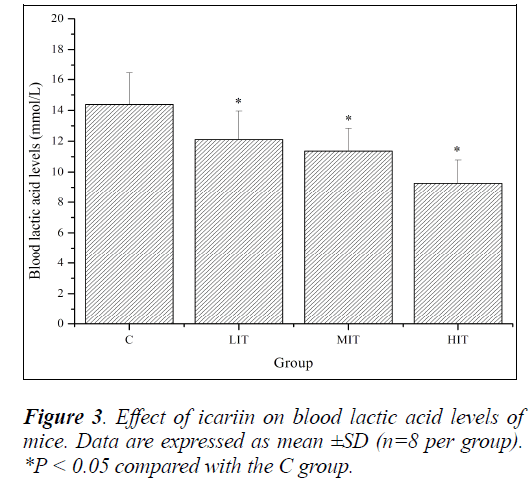 Figure 3: Effect of icariin on blood lactic acid levels of mice. Data are expressed as mean ±SD (n=8 per group). *P < 0.05 compared with the C group.

Effect of icariin on BUN of mice

Blood urea nitrogen (BUN) represents normal renal function; however, there are many factors, other than renal diseases, that can cause an alteration in BUN levels [27]. This includes protein breakdown, dehydration, stress, fatigue, etc. Protein and amino acids are metabolized to meet the energy requirement when the body cannot derive energy from carbohydrate and fat. There may be a positive correlation between BUN and exercise tolerance [28].

So, BUN is another sensitive indicator of fatigue status. As shown in Figure 4, BUN levels of mice in the LIT, MIT and HIT groups were significantly decreased compared with that in the C group (P < 0.05), and the decreases in ratios were 16.17%, 26.26% and 34.71%, respectively. The results indicated that icariin might reduce protein catabolism for energy. 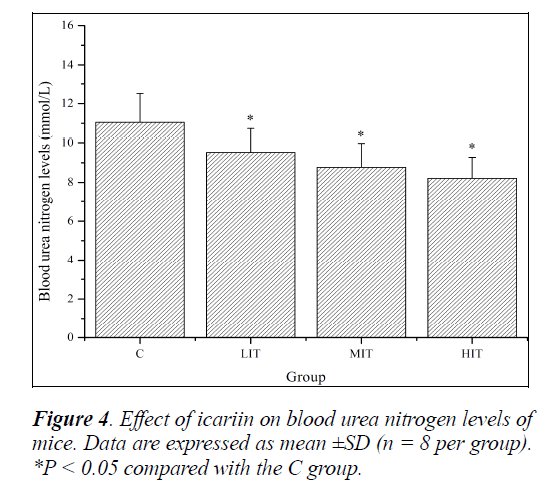 Effect of icariin on Hb of mice

Hemoglobin (Hb) is one of the indicators, which reflects the degree of recovery from fatigue after exercise [24]. Its main function is to serve as carrier for the erythrocyte to transport oxygen and carbon dioxide. Acid-base balance of body fluids is very important because any small change can produce a major disturbance in the body fluid homeostasis since it can affect the electrolyte balance and enzyme functions [18]. Numerous studies have found that higher level of Hb is helpful to improve the exercise ability [29-31]. As shown in Figure 5, Hb levels of mice in the MIT and HIT groups were significantly increased compared with that in the C group (P < 0.05), and the increases in ratios were 17.28% and 38.83%, respectively. Although the Hb levels of mice in the LIT group were also increased, no significant difference was observed (P > 0.05). The results indicated that the anti-fatigue effects of icariin might be related to the improvement in the oxygen-transport capacity of the blood. 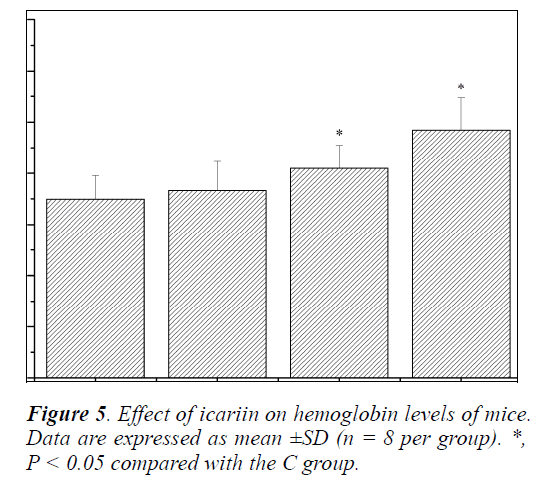 Energy for exercise is derived initially from the breakdown of glycogen in muscles and, later, from the circulating glucose released by the liver as a result of glycogenolysis. Thus the amount of glycogen, which reflects the source of the energy, would be a more suitable marker of physical fatigue [32]. Indeed, previous studies have demonstrated that the depletion of liver glycogen and muscle glycogen is a common phenomenon in physical exercises. Depletion of liver glycogen may lead to hypoglycaemia impairing nervous function in over exercise fatigue condition [25]. 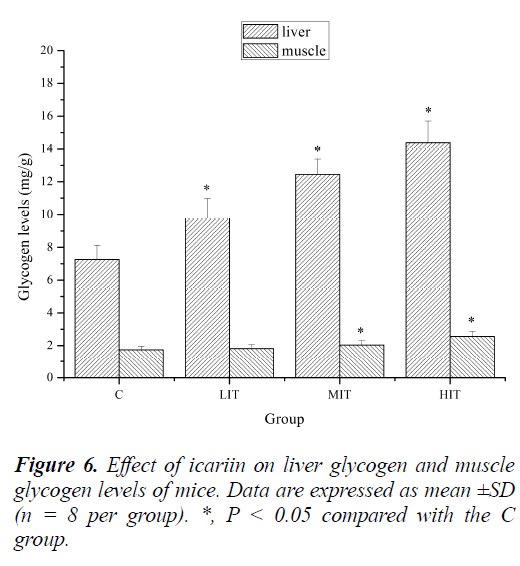 Figure 6: Effect of icariin on liver glycogen and muscle glycogen levels of mice. Data are expressed as mean ±SD (n = 8 per group). *, P < 0.05 compared with the C group.

In conclusion, the present data showed that icariin could prolong exhaustive swimming times of mice, which is accompanied by increases in blood glucose level, hemoglobin and glycogen levels, and decreases in BLA and BUN levels. These results suggest that icariin has anti-fatigue properties. However, further investigational studies need to be done to clarify the detailed mechanisms involved in the anti-fatigue properties of icariin.

This research was supported by University of International Business and Economics Research Fund, 2012. The authors are grateful to the Dr. Yiyang Zhang (Jilin University, China) for providing technical support and valuable suggestions.