Most of our current understanding about the toxicity of various chemicals comes from animal data, and as An-drew Rowan notes in his critical evaluation of animal re-search, Of Mice, Models & Men, "there is no doubt that our knowledge of the risks to humans of most chemicals is very inadequate" [1]. In recent years the practice of acute toxicity testing in animals has been criticized by animal right activists and antivivisectionists, as well as moderate organizations, e.g. FRAME (Fund for the Re-placement of Animals in Medical Experimentation). Ser-endipitously, Russell and Burch's proposal of the three R’s, i.e. Replacement, Reduction and Refinement alterna-tives has coincided with the development of molecular biology [2], as well as with vast improvements in tech-nique for such things as propagating cells in culture and measuring molecular processes. However, some form of acute toxicity testing in animals is still deemed to be nec-essary in evaluating a test compound’s safety. Such inves-tigation can provide useful information on signs of intoxi- cation, target organs of toxicity and cause of death. This can be achieved if the experiments are performed by well trained personnel, using all available techniques to moni-tor physical and pathomorphological changes of the or-gans [3]. However, there are many potential advantages of in vitro systems in toxicity testing are numerous. In vitro tests are usually quicker and less expensive. Experimental conditions can be highly controlled and the results are easily quantified. However, the relative simplicity of non whole-animal testing results in limitations as well. Cells or tissues in culture often cannot predict the effect of a toxin on a living organism with its complex interaction of nervous, endocrine, immune, and hematopoietic systems [4]. Although tissue and cell culture assays are currently the most popular in vitro tests for evaluating acute toxic-ity, other techniques are gaining prominence. These tech-niques may involve the use of bacteria and lower life forms for the determination of toxicity [5]. In the past decade, some laboratories have shown a significant corre-lation between in vivo or in vitro toxicity using mammal-ian cells and in vitro test systems using bacteria and pro- tozoa [6], [7]. At present the in vitro methods available for determining sensitizers principally involve the use of cell mono layers, co-cultures or isolated skin explants. There are other fields of research which could lead to the development of more complex test systems. These are able to more accurately mimic the events which lead to skin sensitization in vivo and include structure activity relationships (SAR), quantitative structure activity rela-tionships (QSAR) and expert systems. It is hoped to in-vestigate the immunology and cell biology underlying the phenomenon of skin sensitization, to determine the most realistic opportunities for successful development of non-animal alternatives [8]. Protozoa are the simplest eu-karyotic organisms but despite this contain almost the same metabolic systems as higher animals [9]. In addition they are appropriate organisms for toxicological studies, owing to their ease of culturing, short life cycle and large surface contact with the environment. The most common protozoan model used in toxicological studies is Tetrahy-mena pyriformis [10]. Antidepressants represent a major achievement in the treatment of patients suffering from depression. Unfortunately, reports of lethal overdoses of antidepressants started appearing early in the course of their clinical use, demonstrating their potential for harm as well as their therapeutic effects [11]. Antidepressant drugs are one of the most frequently ingested substances for accidental poisoning or a suicide attempt. The Ameri-can Association of Poison Control Centers reported that antidepressants were the most frequent cause of death from drug ingestion in the years 1983 and 1984 [12].

In the era of growing concerns of animal rights and the human safety issues related to exposure to biological samples, there is a huge need for developing alternative methods of toxicological evaluation of drugs. In this study we made an attempt to investigate the possibility of using Tetrahymena pyriformis as an alternative for studying the drug’s effect on cell proliferation. This study concentrated on one particular in vitro cytotoxicity test using Tetramy-mena pyriformis, and investigating the effects of antide-pressants. MTT (3-(4,5-dimethyethiazol-2-yl)-2,5-diphe-nyltetrazolium bromide) assay was used for measuring cytotoxicity. The tetrazolium salt reduction method is widely used as a means of examining cell proliferation and viability. The internal environment of proliferating cells is more reduced than that of non-proliferating cells [13]. The tetrazolium salts are reduced at sites in the mi-tochondrial electron transport system and are a test for succinate dehydrogenase activity. The reaction converts yellow salts to blue crystals that are dissolved and can be read spectrophotometrically. The most frequently used of these are MTT (3-(4,5-dimethyethiazol-2-yl)-2,5-diphen-yltetrazolium bromide), XTT (sodium 3’-[1-phenyl-amino)-carbonyl]-3,4-tetrazoliuum]-bis (4-methoxy-6-ni-tro) benzene-sulfonic acid hydrate, and MTS. Tetrazolium salt reduction, as an indicator of cell growth, has been used in models for screening cytocidal chemicals [14], [15] or cell growth promoting factors and cytokines [16].

All the antidepressant compounds tested were obtained from Sigma Aldrich, Dublin, Ireland. All assays are con-ducted in axenic conditions. 18–24 h cultures of Tetrahy-mena pyriformis used were strain GL, ref. CCAP/1630/1F from Strains of Culture Collection of Algae and Protozoa, Scotland, United Kingdom. The cells were grown to exponential phase at room temperature in Proteose Pep-tone Yeast Extract Medium (PPY) which consisted of 2% w/v protease peptone and 0.25% w/v yeast extract at pH 7.0–7.5. The density of T. pyriformis cultures was ad-justed in fresh PPY in order to obtain 104 cells/ml. The cells were initially counted using a Sedgwick Rafter counting chamber.

A volume of 80 μl of suspended T. pyriformis was added to each well of a 96-well flat-bottom microtitre plate along with 10 μl of the antidepressants which were tested at a range of concentrations. The well plate was then in-cubated at 28oC under 5% CO2 for 1 hr. Then, 10μl of MTT (3-(4,5-dimethyl-tiazol-2-yl)-2,5 diphenyl-tetrazo-lium bromide (Sigma, Chemical Co., Dorset, UK) stock solution (10 mg/ml in distilled water) were added and time 0 readings were taken at 540 nm using the spectro-photometer and the plates were incubated at 280C for 4 hrs. The MTT reduction was stopped with 200 μl of a solution containing 50% dimethylformamide and 10% sodium dodecyl sulfate-(DMF/SDS) without removing the medium. The formazan production due to succinate dehydrogenase activity was measured 30 min after DMF/SDS incubation.

Concentration-response graphs were generated for each antidepressant using GraphPad Prism software. These graphs were analysed using a curve fit for sigmoid dose-response, and IC50 values were derived. Results are ex-pressed as mean IC50 with the 95% confidence intervals.

Concentration response curves were obtained for each antidepressant when incubated with Tetrahymena pyri-formis and the IC50 values determined. A typical concen-tration response is illustrated for desipramine (Figure 1). The results for each antidepressant are summarized in Table 1. As can be seen from the table, The IC50 of the tested compounds in Tetrahymena pyriformis ranged from 0.24 mM for trimipramine to 5.33 mM for imipramine using the MTT assay. 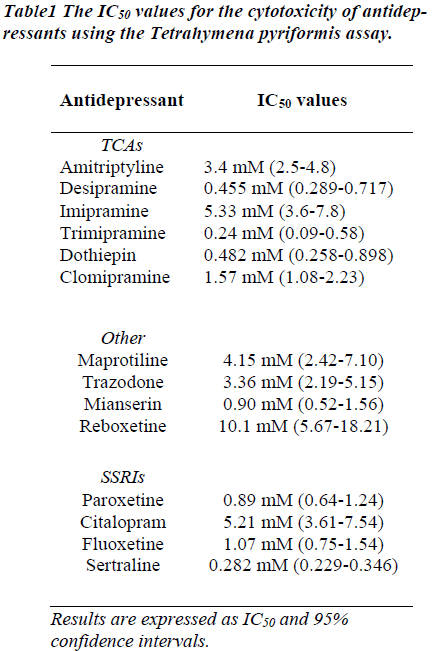 Table 1: The IC50 values for the cytotoxicity of antidep-ressants using the Tetrahymena pyriformis assay.

The results obtained in this study using Tetrahymena pyriformis were then compared and correlated with the human Fatal Toxicity Index (FTI) for antidepressants (Fig. 2). FTI data was taken from Henry et al [17]. The above analysis shows that there is a very poor correlation between the human FTI and the IC50 values obtained for the antidepressants using Tetrahymena pyriformis. 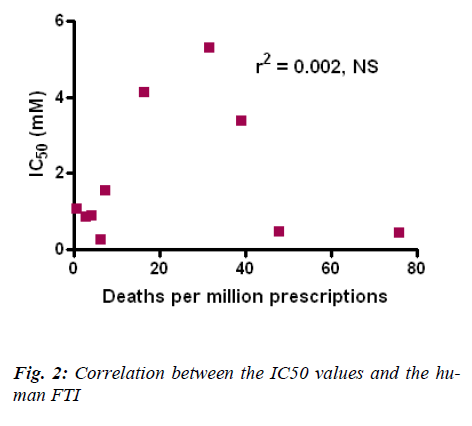 Fig. 2: Correlation between the IC50 values and the hu-man FTI

Use of human blood cells in the cell proliferation studies is limited because of the safety concerns, vaccination, availability of trained professional to draw blood, com-pensation for the donor, transport of blood samples to the lab and the handling of blood samples in the lab etc. The use of animal blood cells for such studies is again limited by many of the above said factors plus the ethical issue of animal sacrifice. The least one can do in basic research is to avoid tests which cause severe suffering to animals, as is required in Switzerland and other European countries by binding ethical principles and guidelines. The increas-ing standard of approval and control procedures has im-proved the situation over the years. There are many ex-amples of successful alternative methods in basic re-search. But, the application of such methods is in most cases limited to the laboratories in which they were de-veloped, calling for technology transfer [19].

Tetrahymena pyriformis has been used extensively in the past to perform various toxicological assays and has been consistent in reproducing the results [20]. Hence this or-ganism is being commonly used as a toxicological tool.