The present paper describes a comparative characterization of cytotoxic effects of doxycycline and cisplatin on osteosarcoma cells by using impedance sensing techniques. The impedance sensing device was obtained from Applied Physics and the osteosarcoma cells were cultured on the electrodes of the purchased devices. The impedimetric cytotoxic natures of both the drugs on cells are investigated by using impedance analyzer at 10 mV in a frequency range of 100 Hz to 1 MHz. Impedance spectrum decreases drastically in drug treated samples above 10 μM dose as cell death and detachment from the electrode surfaces increases rapidly. However the cisplatin shows better results over doxycycline as observed from impedimetric as well as conventional results. The cisplatin treated sample shows lesser impedance than the doxycycline treated sample as the IC50 value of doxycycline is more than cisplatin on osteosarcoma cells.

Osteosarcoma is an aggressive malignant tumor that arises in bone, in which the malignant cells osteoblastic differentiation and produce osteoid [1]. Osteosarcoma occurs most frequently in adolescents at the age of 10 to 20 years while secondary osteosarcoma predominates in adult patients [2]. It is regarded as the most common sarcoma in bone, but it is quite rare in appearance. Osteosarcomas represent less than 1% of cancers overall and the 5-year survival rate after amputation is only 5– 20% [3]. At all ages males are more prone to this disease than female patients. This cancer occurs in humerus, femur, fibula, vertebrae, tibia, and ilium with a greatest case in femur and tibia [4,5]. The pathogenic factors such as genetic impairments, viral infection, chemical reagents, and radiation are responsible to form this type of cancer [4-6] Osteosarcoma is regularly treated with combined therapies such as surgery, chemotherapy and radiation therapy [7].

Regarding chemotherapy the drugs such as cisplatin and doxycycline are more often used to treat the osteosarcoma and the conventional methods such as MTT assay and imaging are used to assess the cytotoxicity of the used drugs. But such conventional methods are time consuming and expensive as well as cell dies with the end of the experiment. Thus a method is required to study the live cell behaviours and in the present day electric cell substrate impedance sensing (ECIS) is used to study the cellular properties in a culture.

The human osteosarcoma cell such as U2OS was supplied by American Type Culture Collection and maintained with RPMI 1640 medium. Then the cells were cultured in RPMI 1640 supplemented with essential antibiotics and growth factors such as FBS, penicillin, streptomycin, and glutamine (pH 7.3) with appropriate concentrations. The cell number was adjusted to 4 × 105/mL. The osteosarcoma cells were cultured in impedance sensing devices and 96-well plates on by using RPMI 1640.

The ECIS device possesses eight wells and each well contains ten gold microelectrodes (250 μm diameter). The microelectrodes were used to culture the cells on their surfaces and help to measure the current flow passing through the medium. The dimension of the culture area is 0.8 cm2 and the volume of the well-used for culture is 600 μl. The impedance sensing device was kept in a tissue culture incubator (37°C and 5% CO2) for cell culture and measuring of cell impedances. The array plates were equilibrated with 300 μl of RPMI 1640 for 12 h and subsequently 1 × 105 cells were cultured to each well in 300 μl media.

The toxic effects of doxycycline and cisplatin were investigated by obtaining the impedance of drug treated osteosarcoma cells. The impedance is measured in a frequency range of 100 Hz to 1 MHz in a logarithmic scale after 24 h of drug treatment. The impedance were measured ten times repeatedly and averaged to get man impedance for each frequency. This mean value of impedance obtained from the experiment was imported to Zsimp Win (Version 3.10) for fitting purposes the equivalent circuit used here was obtained from an old literature [11] and was illustrated in Figure 1. 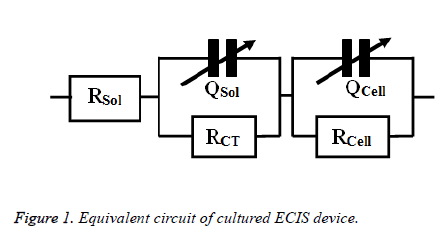 Before the cell seeding, the impedance sensing devices was disinfected with 75% ethanol for 20 min, dried with nitrogen, and irradiated with ultraviolet radiation for 20 min. MEM (300 μl,) was then added to the wells of the device and maintained at 37°C for 30 min. Next, the osteosarcoma cell suspensions (300 μl, 1 × 105 cells) were added into each well. Then the device was place in an incubator to facilitate the growth of cells on electrode surfaces and subsequent measurement of impedance. The doses of doxycycline and cisplatin (0, 5, 10, and 15 μM) were added into different wells of the impedance sensing device after 30 min of inoculation to investigate the cytototoxic effects of the drugs.

Osteosarcoma cells (1x104 cells/well) were cultured and allowed to grow for 24 h and treated with doxycycline and cisplatin at varying concentrations (10 nM to 10 μM) for 24 h. IC50 value was measured by MTT dye reduction assay as described in the previous literature [16].

Osteosarcoma cells (1x104 cells/well) were cultured in 96-well plates and drug doses such as 0, 5, 10, and 15 μM is added to different wells and treated for 24 h. Then cells were rinsed with phosphate buffered saline, treated with 0.25% of trypsin and stained with 0.4% trypan-blue. Then the cell viability was counted by using automated cell counter (Biorad).

The bode plots for the cytototoxic effects of cisplatin and doxycycline on osteosarcoma cells after 24 h are described in Figure 2. The investigational data are fitted quite well with the used equivalent circuit as shown in Figure 1. This result can be compared to the previous result regarding cell culture on electrode surfaces [17]. 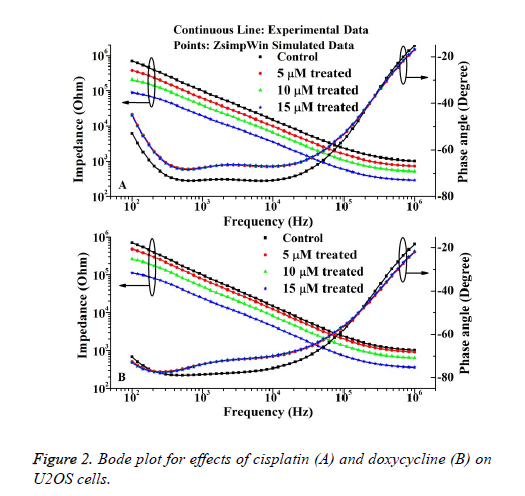 Figure 2. Bode plot for effects of cisplatin (A) and doxycycline (B) on U2OS cells.

It is evident from the Figure 2 that the impedance decreases steadily with increase of frequency. However, the cisplatin shows more cytotoxic effect than the doxycycline as observed from the Figure 2. The relative standard deviations (RSD) for control and treated experiments are stayed below 10% justify the reproducibility nature of the investigation.

Where, ZC and ZT represent the mean value of impedance for untreated and treated sample at 24 h respectively. The IC50 values of doxycycline and cisplatin estimated from the impedance data are 8.61 ± 0.5673 μΜ and 6.19 ± 0.3214 μΜ respectively. Thus it is evident that, the IC50 value obtained by impedimetric method correlate well with the values as obtained by MTT assay method.

Also the impedimetric role of drugs on RPMI 1640 is measured by using medium with different doses of drugs and the Bode plot is depicted in Figure 3. From the figure it is obvious that the spectra of impedance values for different drug doses of doxorubicin and cisplatin do not fluctuate significantly from the control data with 0.004 % error. Therefore it can be understood that the drugs in medium do not interfere with the cell impedance measured in tissue culture. 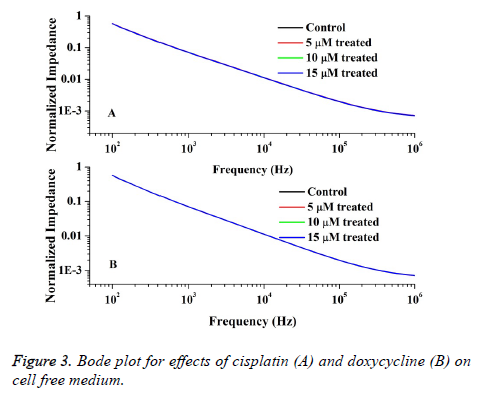 Figure 3. Bode plot for effects of cisplatin (A) and doxycycline (B) on cell free medium.

The phase contrast images as shown in Figure 4 indicate that the cell death increases with the increase of drug doses in both the cases. This arises due to dose dependent cell death in culture. However in the present experiment cisplatin shows better result than the doxycycline as evident from the Figure 4. Also the conventional data such as MTT assay results and microscopic images correlate well with the impedance data of cytotoxicity. 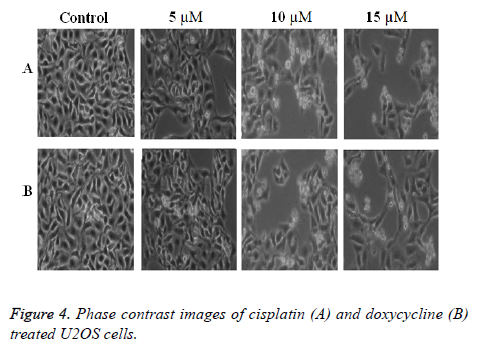 Figure 4. Phase contrast images of cisplatin (A) and doxycycline (B) treated U2OS cells.

The decrease in impedance arises as drugs interact with cells resulting cell death and detachment from the electrode surfaces. With the increase of drug doses the impedance decreases in both the cases showing the dose dependent nature of cisplatin and doxycycline. The cell death is prominent in the treated sample over 10 μM in both the cases leading to decline in the spectrum of impedance compared to control sample as described in Figure 2. The present results can be compared to the decreasing impedance with the increasing drug doses of different chemotherapeutic agents as described in previous literatures [13,18,19]. Also the cell death shown by phase contrast images as described in Figure 4 can be comparable to the impedance results as well as the results described in the previous literatures [20-22]. The mechanism of the ECIS sensor depends on the attachment and detachment of the cells from the electrode surfaces and the mechanism of the sensor can be compared to the previous result [13]. When the drugs act on the cultured cells, the cell dies and detaches from the electrode surfaces. Thus the impedance decreases due less availability of live cells on electrode area. Both the drugs show apoptotic nature in a dose dependent manner. However cisplatin shows better cell death than the doxycycline as observed from the impedimetric as well as conventional results. The cytotoxic nature of drugs should be explored further to understand the mechanism involved in better cell death in case of cisplatin than doxycycline.