An epidemiological study of electroplaters occupationally exposed to Nickel and Chromium

The lock industry largely employs nickel (Ni) and chromium (Cr) plating. Workers employed in the lock factories of Aligarh (India) are occupationally co-exposed to both Ni and Cr, and an epidemiological survey of such workers may provide valuable information on the health hazards induced by exposure to Ni and Cr. In the present study, the sample population was divided into 3 groups on the basis of exposure duration. Group I- Control subjects, Group II- Electroplaters with exposure of <10 (1-9) years, Group III- Electroplaters with exposure of ≥10 (10-25) years. The groups had mean age of 25.85±4.65 years ranging from 18-35 years. A questionnaire-based epidemiological survey was undertaken to get an overall idea of the general health of electroplaters. Complete medical history was accounted and physical examination was also done. The body mass index (BMI) showed a decrease from 20.46±3.65 kg/m2 in control Group I to 17.46±2.31 kg/m2 in Group III of electroplaters, which had the highest exposure. The symptoms like malaise, dizziness, fever, tiredness, eye problems, skin allergies, dermatitis, chrome holes, problems in the upper respiratory tract, dental discolouration, cough, tight-chestedness, shortness of breath and other chest related problems, had higher prevalence in electroplaters with sub-chronic exposure than those subjected to chronic exposure. The results of this study may be attributed to the sudden impact of toxicants from the electroplating industry on the workers subjected to sub-chronic exposure. Sub-chronically exposed individuals showed various defense responses contributing to a surge in symptoms as compared to their chronically exposed counterparts

Heavy metals are stable and persistent environmental contaminants. The electroplaters employed in the lock industry are inclined to possible occupational exposure of nickel and chromium. A person spends, on an average, one third of his life at his work place, therefore, the environment in which he works can be a major factor in determining health.

Nickel is a ubiquitous metal frequently responsible for allergic skin reactions and has been reported to be one of the most common causes of allergic contact dermatitis, as reflected by positive dermal patch tests [1-4]. Gawkrodger et al. [5] suggested that the higher number of antigens, or perhaps the larger nickel load, in the extended metal series resulted in a larger proportion of patients reacting. Of the general population, approximately 8-10% of women and 1-2% of men demonstrate sensitivity to nickel. Contact dermatitis, which results from dermal exposure to nickel, is the most prevalent effect of nickel in the general population. Nickel dermatitis produces erythema, eczema and lichenification of the hands and other areas of the skin that come in contact with nickel.

Nickel is also known to affect non-occupationally exposed individuals, especially those handling stainless steel and nickel-plated articles of everyday use, because nickel is a common sensitizing agent with a high prevalence of allergic contact dermatitis[3,4,6,7]. Initial sensitisation to nickel is believed to result from dermal contact but recurring flares of eczema, particularly of the hands, may be triggered by ingestion. Numerous studies have been conducted to attempt to establish the relationship between nickel exposure and dermal irritation. Several studies indicate that a single oral dose of nickel can flare-up the dermatitis in nickel-sensitive individuals [8-12]. However, no change in nickel toxicokinetics was found in relation to nickel allergy [13]. Nickel hypersensitivity also causes asthma, conjunctivitis, inflammatory reactions to nickel-containing prostheses and implants, and systemic reactions after parenteral administration of nickelcontaminated fluids and medications.

Chromium is an important component of the electroplating industry. Chromium plating liquid contains mostly hexavalent chromium, which causes most of the toxic effects, including cancer. Hexavalent chromium is a more potent skin penetrant than the trivalent form [14-15].

Chromium is a significant cause of occupational allergic contact dermatitis (ACD). In Finland, during a 7 yr period (1991–97) chromium was found to cause 5.6% of all ACD. The incidence rate in electroplating per 10000 working years was 3.66 [16]. Symptoms from breathing chromium may include runny nose, sneezing, coughing, itching, and a burning sensation from irritation or damage to the nose, throat, and lung. In severe cases, sores can develop in the nose and result in nosebleeds. Direct contact with Cr (VI) compounds also causes dermal irritation, slow-healing ulcers and nasal septum lesions [17]. Ulcers can develop and with continuous exposure permanent perforations in the nasal septum can occur [18]. Electroplaters occupationally exposed to chromium may develop work-related asthma, wheezing and shortness of breath.

Dermal exposures to hexavalent chromium can result in skin ulcers commonly referred to as chrome holes and may also lead to dermatitis [18]. They have a corrosive action when they enter the skin through a minor nick or break in the skin, resulting in the formation of the ulcers. Typically the lesions are found on fingers, hands, forearms or the soles of the feet when chrome salts have been allowed to permeate boots or shoes. The lesions are usually painless and persist for many months before spontaneously healing with a permanent scar.

Thus, as literature cites, electroplaters occupationally exposed to nickel and chromium may show a wide range of physiological abnormalities. The symptoms seen in electroplaters have been compiled in the present study and give an idea of the overall general health of these workers.

The study was carried out on 150 subjects. All subjects were males and sampling was done in the morning hours, during work-shift. Consent of all the subjects was taken, after informing the objective of this study.

Subjects were categorized into three groups depending upon exposure history:

Control subjects who were normal healthy individuals with no previous history of illness and no exposure to nickel or chromium at the time of investigation.

Electroplaters employed in nickel-chromium plating for duration of less than 10 years. The range of duration of exposure was 1-9 years.

Electroplaters exposed to nickel and chromium for a period of equal to or greater than 10 years. The duration of exposure ranged from 10-25 years. The groups had mean age of 25.85±4.65 years ranging from 18-35 years.

• A questionnaire was used to collect data from each subject. It included questions on nature and duration of work, smoking and drinking habits, medical history and a symptomatology checklist of some common symptoms associated with skin, respiratory tract and dental problems. A sample of the questionnaire is given in Fig. 1. 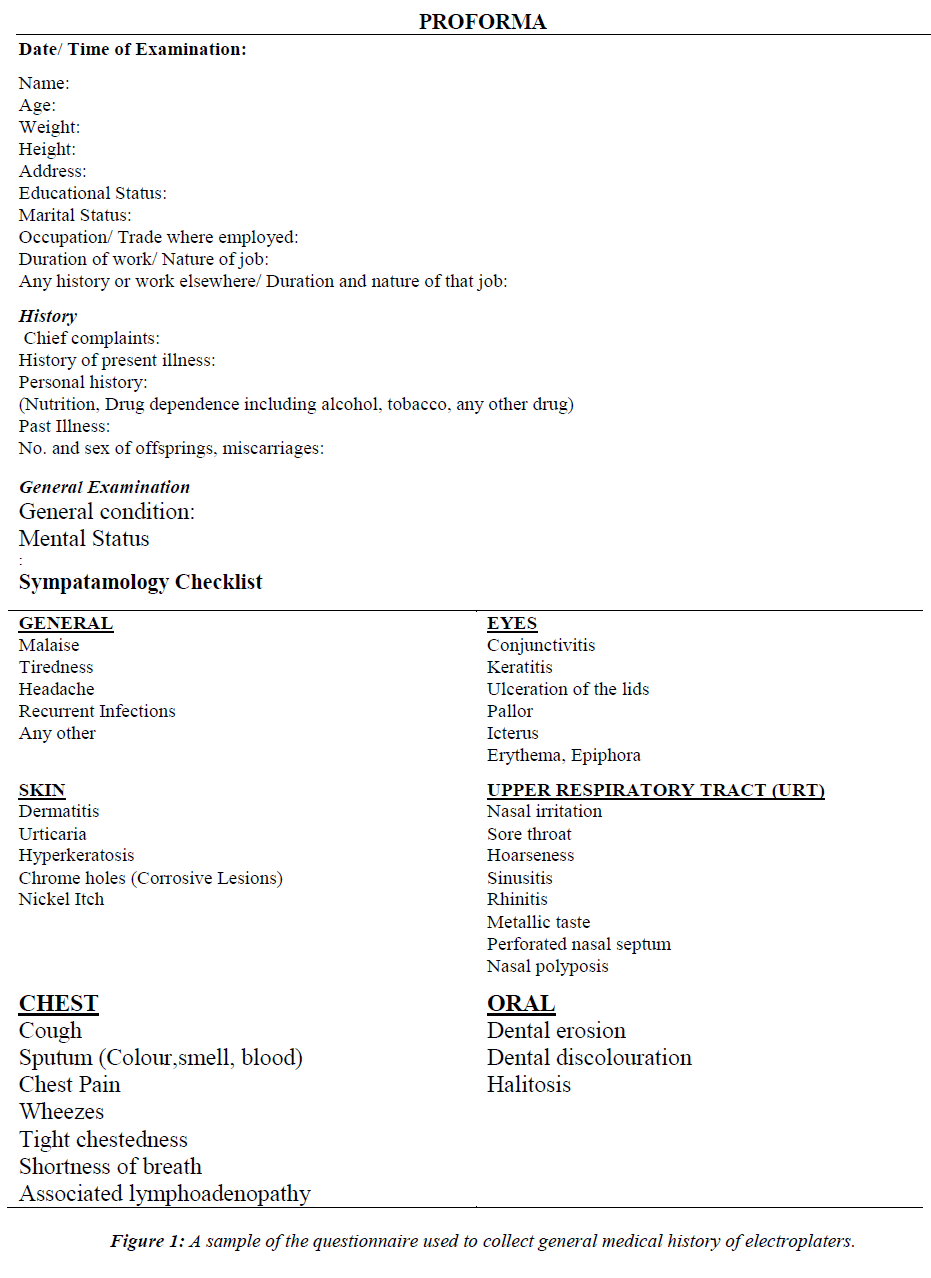 Figure 1: A sample of the questionnaire used to collect general medical history of electroplaters.

• All individuals were clinically examined for any irregularity in their general health.

• Body Mass Index (BMI) was calculated for each individual and mean values for each group were determined.

• Frequencies in % were calculated of all the parameters included in the study. 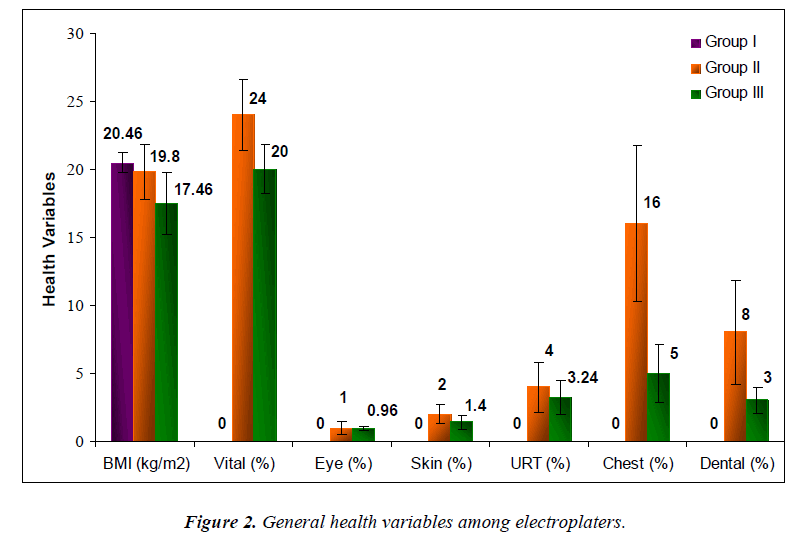 Human exposure to highly nickel and chromium-polluted environments like the electroplating industry has the potential to produce a variety of pathological effects. Among them are skin allergies, lung fibrosis, oral ulcers, diarrhoea, abdominal pain, indigestion, vomiting, leukocytosis, presence of immature neutrophils. cancer of the respiratory tract and iatrogenic nickel poisoning [1,19,20].

The results of the present study show elevated frequencies of disorders and symptoms indicating general unwellness among the electroplaters. The prevalence of such symptoms was considerably higher in Group II than in Group III. This may be attributed to the sudden impact of toxicants from the electroplating industry on the workers subjected to sub-chronic exposure. They show various defense responses contributing to a surge in symptoms. The body mass index (BMI) is a statistical measurement which compares a person's weight and height. BMI was in the normal range for Group II but electroplaters of Group III showed mean BMI of 17.46±2.31 kg/m2 indicating malnourishment and underweight.

The primary target organs for nickel-induced toxicity are the lungs and the upper respiratory tract for inhalation exposure. Other target organs include the cardioavascular system, the immune system and blood [13, 21, 22]. This may be the reason for recurrent infections and high prevalence of chest related problems in the electroplaters in this study.

The general health of workers in the electroplating industry is deteriorated due to exposure to toxic substances, and can only be improved by employing means to minimize exposure to such substances. Enhancing the ventilation or putting lids on the baths could reduce both dermal and respiratory exposure. Although the electroplaters wore gloves when in direct contact with the electroplating tank, some gloves were not impermeable. It was possible that those gloves could increase the exposure when they got wet. The workers were more careless in touching wet surfaces and the solution itself while wearing gloves. Thus, the use of proper gloves is very important to lessen the exposure intensity among electroplaters.

During electroplating, the exposure is partly due to generation of metal containing aerosol. In addition, high exposures may be due to splashes, touching of contaminated surfaces and immersion of hands in the plating solution. Measurements of potential exposure do not give enough information to assess dermal uptake, which would require biological monitoring of the workers. However, clinical examination and history of electroplaters, made it possible to evaluate the targets of exposure, and to give in structions on personal protective equipment and other exposure reduction techniques.