Columbin, a plant-derived compound may represent a key frontier in the treatment of blood-stage trypanosomiasis. To be a viable future drug candidate, there is an urgent need to decipher its physiological target along the mevalonate pathway and to modify the original scaffold in order to improve its physicochemical properties and its ability to cross the blood-brain barrier. In this study, homology modeling method was used to generate the 3D models of the putative targets along the mevalonate pathway. Autodock-vina was used to dock columbin into the ligand pockets of the targets. The result showed that acetyl-CoA synthetase (-9.3 kcal/mol Vs -9.3 kcal/mol standard) and isopentyl- diphosphate isomerase (-9.6 kcal/mol vs. -8.5 kcal/mol standard) were the most plausible targets of columbin. In conclusion, acetyl-CoA synthetase and isopentyl-diphosphate isomerase inhibition may underscore the anti-trypanosomal actions of columbin targeting isoprenoid metabolism.

Trypanosoma brucei transmitted by tsetse flies (Glossina species) is the causative agent of human trypanosomiasis (also referred to as sleeping sickness) [1]. Besides human population, animals such as cattle are also at risk of sleeping sickness caused principally by T. congolense and T. vivax infection [2]. In highly endemic areas, trypanosomiasis constitutes severe socio-economic risk [3]. Human trypanosomiasis has two well-defined stages; the first is trypanosomes within the hemo-lymphatic system and the second stage is the colonization of the central nervous system with attendant disruption of sleep/wake patterns in patients. Metabo-pathologic adaptation response of trypanosomes within the invaded hemo-lymphatic and nervous systems are being studied and key mediators are emerging as drug targets in current research [4-6]. Drugs such as fexinidazoles, a nitroimidazole completely cured CNS mouse model of trypanosomiasis following oral administration for 5 days with no observed mutagenicity [7]. Preliminary data from mouse and monkey models of trypanosomiasis are also promising for diamidine 2, 5-bis (5-amidino-2-pyridyl) furan (CPD-0802), 2, 5-bis [5-(N-methoxyamidino)-2-pyridyl] furan (DB-868) which are dicationic molecules [8]. Yet SCYX-7158, an orally- active benzoxaborole has demonstrated preclinical potency for the treatment of human trypanosomiasis [9,10]. The cost of these drugs and their availability may prove a challenge in low- and-medium resource countries where unfortunately human trypanosomiasis is highly endemic; thus raising a need to develop organic solutions alongside those under current development.

Indeed, extracts prepared from 522 plants collected from various parts of the North America have been screened against blood stage trypamastigote forms of T. brucei and the result had shown that 150 extracts demonstrated>90% inhibition at 20 μg/mL concentration [11]. The only draw-back to this approach is the laborious approach required to elucidate the bioactive compounds in the extracts and their physiological targets. Yet, there is an important aspect of trypanosomal sterol metabolism which had been targeted by plant-derived columbin. It is worthy of note that sterols in trypanosomes are either de novo synthesized or taken up from the host lipoproteins and columbin effectively inhibit de novo sterol synthesis as demonstrated by Nok et al. Demonstrably, columbin has an EC50 value of 50 g/ml, dose-dependently reduced total trypanosomal cholesterol after a 3-day incubation period and cleared blood stage but not cerebrospinal form of trypamastigote forms of T. brucei in mice at 25 mg/kg during a 3-day oral treatment [12,13]. Development of columbin as a full treatment option for trypanosomiasis may require some modification of its chemical scaffold which can only be successfully done with the knowledge of its intracellular target along the mevalonate/isoprenoid/sterol biosynthesis pathway [14]. The computational docking result here demonstrated that out of 11 potential targets evaluated, columbin preferentially targets acetyl-coA synthetase and isopentyl diphosphate isomerase.

3D homology model of the proposed targets whose accession numbers are also displayed were generated using the templates whose PDB IDs shown on the same row using the Swiss Model server (Table 1). Prior to docking simulation, all proteins and ligands were reduced using Auto dock tools [15]. The docking simulation was performed using Autodock vina [16]. The coordinates of the co-crystalized ligand from each of the template was used as the binding site in each case. The binding energy of highest ranked pose was recorded. Columbin 2D structure was retrieved from the PubChem database (CID 188289).

Table 1: Accession number of the query sequences of the proposed targets and the templates for homology modeling.

Columbin has multiple targets along the trypanosome mevalonate pathway

Table 2: Shows the binding energies of Columbin to its key proteins along the mevalonate pathway.

Whilst it is safe to comment that columbin may have multiple targets along this pathway, acetyl-CoA synthetase and isopentyl-diphosphate isomerase are the obvious favorite. Acetyl-CoA synthetase is no stranger as clinical drug target, as celecoxib derivative (AR-12) did show inhibition and currently under development as antifungal drug [21]. Toxicity likely associated with inhibited host acetyl-CoA synthetase may be overcome by a redundant ATP-citrate lyase, in mammalian cells which can perform the same function [22]. Isopentyl- diphosphate isomerase type-II found in trypanosomes is a non- mammalian type under investigation for drug development [23]. 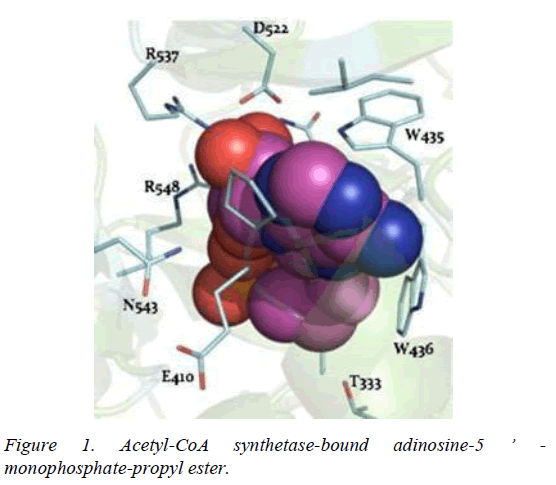 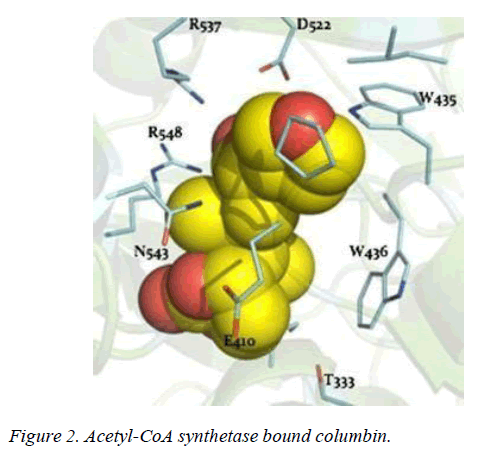 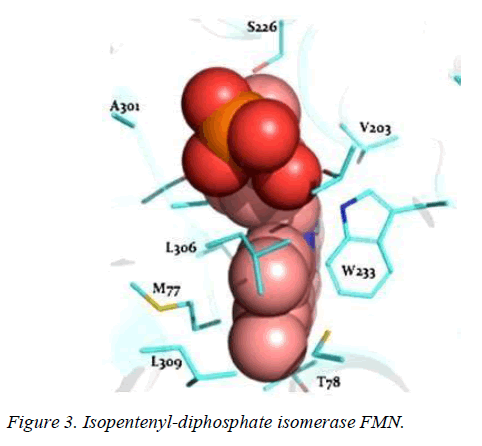 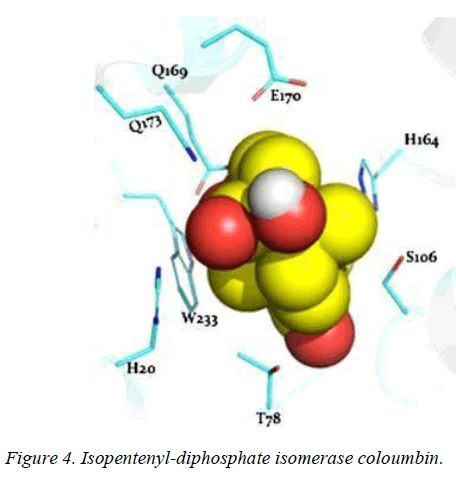 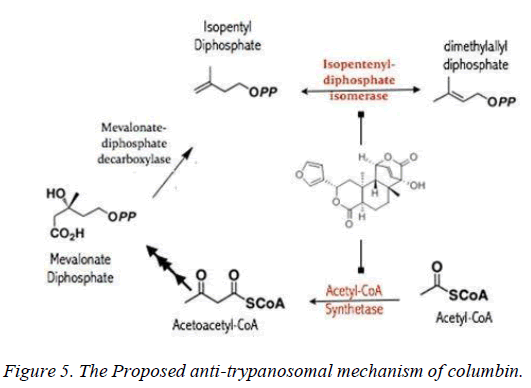 In conclusion, columbin, a plant-derived compound may represent a key frontier in the treatment of blood-stage trypanosomiasis. To be a viable future drug candidate, there is an urgent need to decipher its physiological target along the mevalonate pathway and to modify the original scaffold in order to improve its physicochemical properties and its ability to cross the blood-brain barrier.

In this study, it is shown that acetyl-CoA synthase, the first enzyme of the mevalonate pathway and the isopentyl diphosphate isomerase are the most likely targets of columbin (Figure 5). The poses have been well elucidated and may provide clue on how to modify the scaffold in order to improve its ability to cross the blood-brain-barrier.