A Study of Electrocardiographic changes in smokers compared to normal human beings.

The present study was conducted to assess the electrophysiological and hemodynamic al-teration in the heart and circulation. Recording of ECG is one of the easiest methods of as-sessing cardiovascular dysfunction. Hence this study is taken up to detect the electrocardio-graphic changes due to smoking. The study included male subjects above 18 years of age se-lected from the general population of Davanagere. They were divided into two groups, con-trols and smokers. Each group contained 50 subjects. Smokers were selected as per World Health Organization (WHO) 10th revision of International Statistical Classification of Dis-eases and related health problems (ICD-10) criteria of harmful use. After taking consent and a detailed history from subjects, electrocardiogram was recorded during resting supine position. The ECG results are evaluated for different parameters like heart rate, P-wave, P-R interval, QRS complex, QTC interval, axis deviation, ST segment and T-wave. Two groups were compared statistically by student‘t’ test. p value of 0.05 are less (p < 0.05) was consid-ered for statistical significance. There is statistically significant increase in the heart rate and decrease in QRS complex and T-P interval in smokers compared to controls. P-wave, P-R interval, QTC interval, QRS frontal axis, ST segment and T-wave does not show statisti-cally significant results. Our study results showed that smokers are prone for cardiovascular risk. So in earlier stages, abstinence from smoking can revert back the cardiovascular changes to nearly normal or in more severe cases to recovery with little residual damage to the heart.

Cardiovascular diseases were on the constant rise in both developing and developed countries. Smoking produces electrophysiological and hemodynamic alteration in the heart and circulation. Cigarette smoking is one of the most harmful and addictive habits which is widespread all over the world [1]. There are many forms of tobacco which affects cardiovascular, respiratory and other body systems. It is perhaps the most dangerous of all psychoac-tive substances [2]. Many young people perceive smoking as an attribute to maturity [3]. The World Health Organi-zation's (WHO) report on the Global Tobacco Epidemic in 2008 highlighted that approximately 5.4 million deaths every year are related to tobacco use Unless urgent atten-tion is taken, more than 80% of tobacco-related deaths will occur in low and middle-income countries by 2030 and could kill one billion during this century [4]. Smoking is a well-established risk factor for ischemic stroke, and myocardial infarction (MI) [5]. Smoking cessation sub-stantially reduces the risk of stroke and coronary heart disease, and quitting smoking is an important step toward preventing cardiovascular disease [6]. In a community based study showed, smoking is the risk factor for the development of major abnormal Q/QS wave patterns, T wave abnormalities and development of ST segment de-pression [7]. Western Electric Study provide evidence that minor isolated nonspecific ECG findings like ST-T ab-normalities in middle-aged men which indicate increased mortality risk and warrant vigorous preventive manage-ment against the occurrence of clinical CHD. Major modi-fiable-preventable risk factors like cigarette smoking and others may give rise to this ECG finding [8].

Studies have shown that smoking habit induces changes in the normal ECG pattern, but the results are not consis-tent. Hence we intended to study the same in the Indian population where the smoking pattern, frequency and smoking substances varied. We also intended to correlate the findings to that of the cardiovascular risk pattern.

The study was carried out in the Physiology Department, J.J.M. Medical College, Davangere from July 2003 to June 2005. Subjects were male individuals above 18 years age group selected from the general population. Follow-ing an explanation about the nature and purpose of the study, those subjects who were willing to participate were included after obtaining informed consent. They were grouped into two controls and smokers. Each group con-sisted of 50 subjects. A detailed assessment was done and various parameters were recorded which includes per-sonal details like name, age, occupation, address, smoking history, personal history, family history and past history. Name was taken for identification purpose, but confiden-tiality was maintained.

Smokers were selected as per World Health Organization (WHO) 10th revision of International Statistical Classifi-cation of Diseases and related health problems (ICD-10) criteria of harmful us [9].

The subjects who were selected, a detailed physical and systemic examination was done like pulse rate, blood pressure, respiratory rate, cardiovascular system, respira-tory system and central nervous system. Female are ex-cluded because smoking was more prevalent in men than women [10] and prevalence of smoking was higher in males than in females [11].

Continuous variables were presented as Mean ± SD and Range values. Multiple group comparison were made by one way ANOVA followed by student‘t’ test for pair wise comparison. Categorical data was analyzed by Chi-square test. A p value of 0.05 or less (p < 0.05) was considered for statistical significance.

In smokers group two subjects showed elevated ST seg-ment and one subject with depressed ST segment, but no statistical significance.

QRS complex measurements (in seconds) were 0.08 ± 0.01, 0.06 ± 0.01, in controls and smokers respectively There is statistically significant decrease in smokers com-pared to control group.

T-P interval values (in seconds) were 0.29 ± 0.04, 0.25 ± 0.07, among controls and smokers respectively There is statistically significant decrease seen in smokers com-pared with controls. 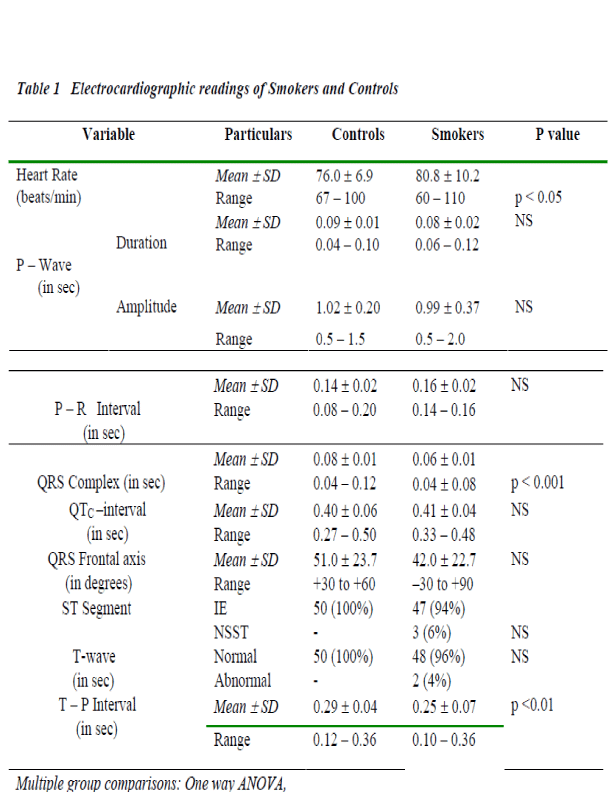 Smoking has varied effects on the cardiovascular system. The quality, quantity, duration and frequency of smoking play an important role in determining whether it is benefi-cial or harmful to the cardiovascular system. Benowitz, Jacob and Rosenberg et al [12] showed that infusion of nicotine in 14 healthy young men increases the heart rate within 5-10 minutes. Majtaba [13] has shown that smok-ing increased the heart rate from 72 ± 3 to 96 ± 3. In our study subjects showed increase in heart rate. The increase in heart rate could be due to stimulation of sympathetic ganglia and discharge of catecholamines from adrenal medulla.

QRS complex measurements in our study showed de-crease in smokers. Mujtaba [13] found a slight decrease in QRS duration in smokers, though it was not significant.

QTC interval in the electrocardiogram reflects the time registered for depolarization and repolarization in the ven-tricular myocardium. Karjalainen, Reunanen and Viitasalo et al [15] reported that smoking was associated with shorter QTC than non smokers. QTC interval in our study does not show any statistical significance.

In our study 2 smokers showed axis deviation of – 30 i.e. borderline left axis deviations. The axis deviation in the smokers may be due to right bundle branch block (RBBB), which is associated with other ECG changes also. RBBB may be produced because of ischemia.

ST segment deviation from isoelectric line is a predictor of future coronary events in asymptomatic population. Rywik, Gittings and O'Connor et al [16] reported that smoking causes down sloping of ST segment in the sub-jects. In our study 3 subjects showed non-specific ST changes in smokers group of no significance.

The present study was conducted to assess the electro-physiological and hemodynamic alteration in the heart and circulation. Recording of ECG is one of the easiest methods of assessing cardiovascular dysfunction The ECG results were evaluated for different parameters like heart rate, P-wave, P-R interval, QRS complex, QTC in-terval, axis deviation, ST segment and T-wave. There is no significant change seen in P-wave and P-R interval among both groups indicating that no change in atrial de-polarization and AV nodal conduction. QRS complex is decreased significantly in smokers and alcoholics com-pared to controls. QTC interval does not show statistically significant changes in all three groups indicating no change in depolarization and repolarization of ventricles.

T-P interval reduction is seen in smokers, which may alter the heart rate.

Our study results showed that smokers were prone for cardiovascular risk. So in earlier stages, abstinence from smoking and alcohol can revert back the cardiovascular changes to nearly normal or in more severe cases to re-covery with little residual damage to the heart.

Firstly in our study women were not included. Secondly, this is a cross sectional study, therefore there is a need for follow up studies