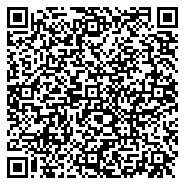 A rare localized giant cell tumor of the tendon sheath in the hip joint: A case report and review of the literature

Giant Cell Tumor of the Tendon Sheath (GCTTS) is the most common benign neoplasm after the ganglion cyst. It is a soft tissue mass that progresses slowly and commonly occurs on the tendon sheath and at the joints of the digits. To date, most case reports have reported GCTTS in the hands. However, GCTTS originating in the hip joint has not been reported to date. Case report: We present a rare case of GCTTS in the hip joint and review the relevant literature. GCTTS of the hip joint is considerably rare. Magnetic resonance imaging is still the first choice of diagnostic modality besides pathological evaluation. Surgery is probably the optimal treatment option to prevent recurrence. In case of bony involvement, reconstructive surgery similar to artificial joint arthroplasty would be an effective treatment option.

Giant Cell Tumor of the Tendon Sheath (GCTTS) is the second most common tumor affecting the hands after the ganglion cyst. They are mostly benign and develop slowly [1]. The GCTTS has been historically portrayed as pigmented villonodular synovitis, localized nodular tenosynovitis, synovial xanthoma, fibrousxanthoma, xanthomatous giant cell tumor, histiocytic giant cell tumor, benign synovioma, and sclerosing haemangioma, which indicates that the GCTTS is a complicated and multiplicate pathological procedure [2-6]. The etiology of GCTTS is still controversial [7]. While some authors believe that it is a disease of neoplastic nature, others accept it only as a non-neoplastic tumor [8-10]. It can be roughly classified into diffuse type (mostly extra-articular) and localized type (mostly intra-articular) [11,12]. The localized type (tenosynovial giant cell tumor) occurs frequently and represents the most common subset arising from the synovial joint, bursa, or tendon sheath with 85% of the cases occurring in the fingers according to literature, while occurrence at other sites has been relatively less common [5,11,13-15]. Particularly, localized GCTTS growing in the hip joint has not been previously reported. Here, we present a rare case of GCTTS originating at the hip joint, which was treated via surgical excision and total hip joint arthroplasty.

A 50 y old woman working as a farmer, presented with pain in her left hip joint and difficulty in walking for almost one year. Groin tenderness and Faber gestures were detected. Magnetic Resonance Imaging (MRI) showed an abnormal signal around the left hip joint, which produced a significant discrepancy between muscle and fat on T1-weighted and T2-weighted images, accompanied by a bony indentation (Figure 1). Owing to its rarity in the hip joint, GCTTS was not initially identified. The incisional biopsy of the lesions would be the most appropriate course of treatment. 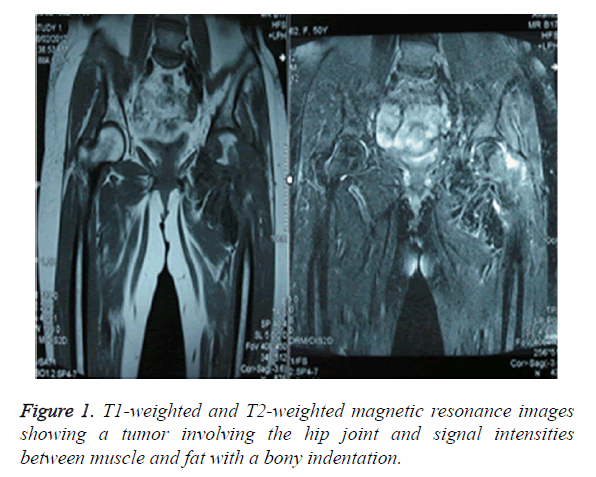 Figure 1. T1-weighted and T2-weighted magnetic resonance images showing a tumor involving the hip joint and signal intensities between muscle and fat with a bony indentation.

During surgery, a copious amount of yellow soft tissue was found around the hip joint. The masses were nodular with intact capsules. The mean size of the masses was 8 × 10 × 9 mm. The acetabulum and femoral head were invaded and consequently compressed. The analysis of fast-frozen sections showed amounts of mononuclear cells and scattered multinucleated giant cells in the hyalinised collagen fibre matrix, which indicated GCTTS. After meticulous dissection, the tumor, as well as the pathological synovium was completely removed. At this stage, we had not operated on the acetabulum and femoral head. GCTTS was confirmed via postoperative pathological examination (Figure 2). 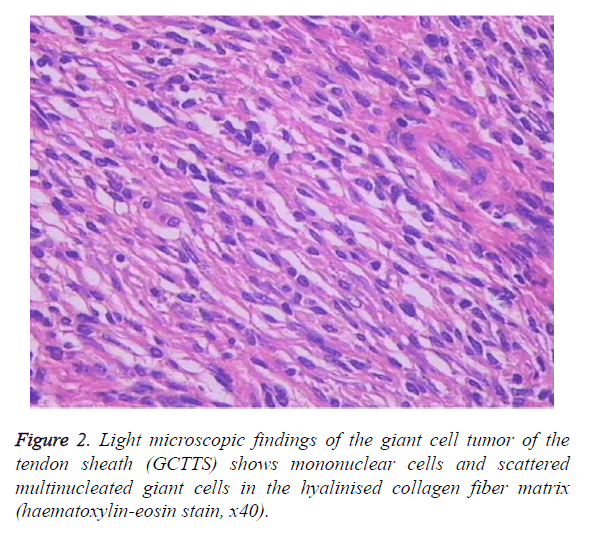 The patient aggressively developed symptoms of pain and difficulty in walking for two months after the excisional operation, which was consistent with the findings of the first operation. In order to prevent recurrence and metastasis, total hip arthroplasty was performed. Considering the younger age and full activity, we choose the cement less prosthesis of femoral stem and acetabular cup, combined with full ceramic interface. After the second operation, the pain disappeared and the patient regained the ability to walk normally.

Although GCTTS usually causes no particular symptoms other than a painless, palpable nodule, it induces osseous erosion [18-20]. The radiographic findings of Karasick demonstrated bone erosion in up to 10%-20% of the patients [21].

Apart from its high incidence in the hands (both flexors and extensors), GCTTS has also been reported in other sites including the toes, deltoid muscle, knee joint, pes anserine bursa, spread forearm, thigh and vertebrae [5,11-15,17,18,26-36]. GCTTS invasion of the parotid gland has also been reported [37]. All these studies show that GCTTS actively and aggressively proliferates, which is inconsistent with previous findings suggesting that GCTTS progresses slowly. However, GCTTS was seldom reported in the hip joint. Gitelis et al. reported a case of pigmented villonodular synovitis (diffuse type GCTTS) in 1989 [38]. However, localized GCTTS with an intact capsule has not been previously reported in the hip joint.

The high recurrence rate of GCTTS is the main challenge in its treatment [1,2,17,19,39]. Surgical incisions should be planned in a way that allows the surgeon to have dorsal and ventral access to tumor extensions. The tumor itself must be dissected gently to avoid potential regional metastasis, which is possible through the resection of the entire tumor with the intact capsule. The cuff of the tendon sheath, part of the capsule, periosteum, or even part of the tendon should be removed if required to ensure the removal of all pathological tissue. To deal with intraosseous invasion, some authors have suggested tumor excision accompanied by the curettage of the involved bone, lavage with 0.25% phenol and cancellous bone graft [40]. In case of extensive bony involvement, the involved bone segment could be totally amputated while preserving the neurovascular bundles, skin, nail and pulp; followed by microsurgical reconstruction [41]. Joint replacement could serve as an alternative for reconstruction following tumor resection, similar to our case. Intra-articular GCTTS can also be resected via arthroscopic treatment. However, the risk of recurrence after the procedure is still uncertain [27].

Unfortunately, recurrence is still a huge challenge concerning the surgical resection of GCTTS. In some cases, the recurrence rate was as high as 50% [27]. The risk factors known to be associated with a high recurrence rate include the proximity to the arthritic joint, proximity to the distal interphalangeal joints of the fingers, proximity to the interphalangeal joint of the thumb and radiological osseous erosions [42]. In a recent study, it was identified that molecular genetics played an important role in the aggressiveness and recurrence of GCTTS [6,16]. Jayant et al. reported that radiation therapy might be helpful in case further surgery is not a good option in recurrent cases [43]. Chemotherapy is also an effective alternative in recurrent cases or where surgery is contraindicated [3].

The authors declare that they have no conflicts of interest.

We thank the Department of Pathology at the Second Clinical College of Harbin Medical University, China, for their technical assistance.