A prevalence of thyroid dysfunction in Kathmandu University Hospital, Nepal

Thyroid dysfunction is defined as the altered serum thy-roid stimulation hormone (TSH) level with normal or al-tered thyroid hormones (free tri-iodothyronine- fT3 and free thyroxine- fT4). Thyroid dysfunction is a common endocrine disorder affecting about 300 million people worldwide and over half are presumed to be unaware of their condition [1]. Thyroid dysfunction is also a major health problem of Nepal with prevalence of nearly 30% of the population affected in eastern region of Nepal alone [2]. However, the prevalence and pattern of hypothyroid-ism depend on ethnic, geographic, and environmental factors including iodine intake status [1,3]. Hypothyroid-ism and hyperthyroidism are two widespread thyroid problems, of which hypothyroidism is much more com-mon. These disorders are eight times more common in women than in men [1].

This was a hospital based study conducted in the Depart-ment of Biochemistry, Dhulikhel Hospital-Kathmandu University Hospital (DH-KUH). In this retrospective study, the subjects visiting DH-KUH from year January 2005 to June 2009 were enrolled. Those patients who had performed the thyroid function test, {i.e. free tri-iodothyronine (fT3), free thyroxine (fT4) and thyroid sti-mulation hormone (TSH)} were enrolled in the study. Subjects with incomplete thyroid function test were ex-cluded from the study. The age and sex of the subjects were also noted. Most of the subjects of study were resi-dent of Kavre district.

2.0 ml of venous blood was collected from the subjects attending DH-KUH. Blood collected in plain vial was allowed to clot and centrifuged at 3000 rpm for 15 min-utes. The separated serum was stored at -20°C for hor-mone assay.

Thyroid function test panel (fT3, fT4 and TSH) were as-sayed by the ELISA method using standard kit. fT3 and fT4 were assayed by competitive immunoassay method and TSH was assayed by sandwich immunoassay method. All three parameters were estimated by following the same standard protocol provided by the manufacturer (RFCL, India). For each analyte, 100 μL of enzyme con-jugates of corresponding analytes were added to the wells after the addition of the 50 μL samples and incubated for 60 minutes and washed thrice with the wash buffer to wash the excess of the conjugate. After this 100 μL of TMB (Tetramethyl benzidine) substrate was added to each well and incubated for exactly 15 minutes and reac-tion stopped with the 50 μL of 0.1 N HCl solution. The reading of each well was taken at 450 nm against a differ-ential filter of 690 nm. 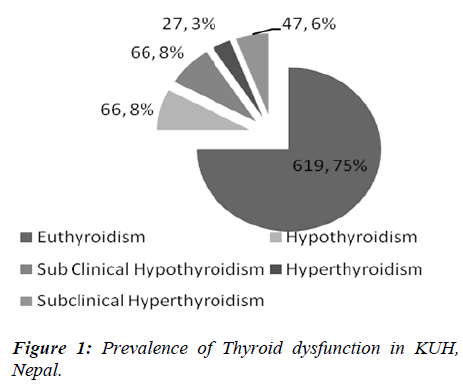 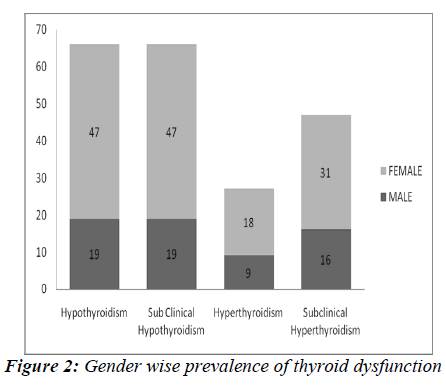 Table 2 represents the comparison of thyroid hormone levels in male and females. The mean TSH level in the male was higher than female but it was not statistically signficant. fT3 and fT4 levels were significantly different in males and females when the Mann Whittney Test was applied. 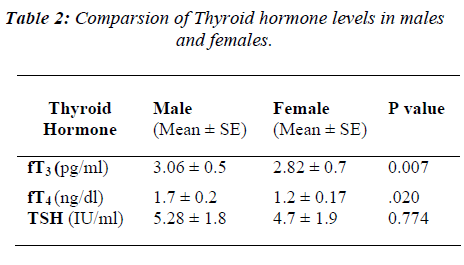 Table 2: Comparsion of Thyroid hormone levels in males and females.

Estimates of the prevalence of thyroid dysfunction depend upon methodological factors, classifications of hypothy-roidism, and composition of the community examined by age, ethnicity, and gender, making comparisons between studies of limited value. The prevalence and pattern of hypothyroidism depend on ethnic, geographic, and envi-ronmental factors including iodine intake status.

The prevalence of thyroid dysfunction was high in subjects attending DH-KUH. The similar study observed nearly 30% of the population were suffering from thyroid dysfunction in eastern part of Nepal [2]. The prevalence of hypothyroidism in various studies from around the world shows a considerable variation and its current pre-valence ranges from as low as 1% to as high as 20% for subclinical and 1 – 2% for overt hypothyroidism [3].

Furthermore, hypothyroidism is the most common thyroid disorder in the adult population and is more common in older women [13]. However, thyroid dysfunction in eld-erly individuals often occurs unnoticed, and methods for accurate detection may be controversial [14]. Hypothy-roidism is usually autoimmune in origin, presenting as either primary atrophic hypothyroidism or Hashimoto's thyroiditis and rarely pituitary or hypothalamic disorders can result in secondary hypothyroidism [13]. Similarly Baral N et al. (2002) have reported high prevalence of hypothyroidism among thyroid dysfunction [2]. By con-trast hyperthyroidism is much less common compared to hypothyroidism. Graves' disease is the most common cause and affects primarily young adults. Toxic multi-nodular goiters tend to affect the older age-groups [13]. In present study, the prevalence of total hyperthyroidsim was 9% including both subclinical hyperthyroidism(6%) and hyperthyroidism(3%). One similar study showed con-trasting result where the overall prevalence of thyroid dysfunction in the sample was 12.7%; relatively low compared with the present study. Of the 73 participants with high TSH levels, 15 (20.5%) had overt hypothyroid-ism, and of the 54 participants with low TSH levels, 12 (22.2%) had overt hyperthyroidism. Only one participant (1.85%) had T3 toxicosis [12].

Although all age group presented with thyroid dysfunc-tion a high number of subjects was observed between age groups of 15-45 years of age. One similar study reported the mean age of thyroid dysfunction is approximately 39 years of age, which showed the accumulation and manifestation of disorder symptoms in this age group. Few studies have revealed that incidence of thyroidism increases with advancing age [10,14-18]. Children under 15 have presented with hypothyroidism which may be associated with iodine deficiency disorder or Downs syndrome which ultimately retards physical and mental growth and develpoment [8,19]. Few studies have shown obesity, diabetes and metabolic syndrome have strong association with thyroid dysfunction [9,13]. Some studies have also shown the association of hypothyroidism with depression [20,21].

There were few limitations of our study. The TSH test result is an excellent tool for screening new patients for thyroid disease but the complete thyroid panel is needed for an accurate diagnosis and assessment of thyroid func-tion. First, the present study was based on routine thyroid function test i.e. serum free T3, free T4 and TSH meas-urement. The present study could have been strengthened if Total T4, Total T3, thyroglobulin, anti-thyroperoxidase (anti-TPO), anti-thyroglobulin (anti Tg), TSH receptor antibodies and Thyroid stimulating immunoglobulin (TSI) were included in stratifying thyroid dysfunction. Second, the possibility that TSH cut-offs used in the present study may have understated health risk. The cut-offs used were those recommended by the manufacturer of the kit and other studies because Nepal does not have its own refer-ence interval for thyroid function test panel.

Because the present study was a hopital based study, it may not represent the whole population. But, the study has identified the burden of thyroid dysfunction in Kavre and can be used as baseline data for future studies. The present study has revealed the prevalence of thyroid dysfunction typically hypothyroidism and subclinical hypothyroidism were higher in the Kavre region but the etiology of the disease remains unidentified. Moreover, the disease were preponderant in women and the elderly.

Further population based epidemeological studies are needed to establish the accurate prevalance and predominent etiological factors of thyroid dysfunction in this region of the country. In addition, the role of depression, obesity and diabetes must be extensively studied and explicitly defined. The study recommends thyroid dysfunction screening and treatment campaigning in the population of Kavre district to reduce the burden of disease.