Computer aided method is becoming the popular tool in the diagnosis of various disease. These tools provide an error free and simplistic diagnostic procedure. This paper discusses the computer aided tool developed for the diagnosis of bone disorders caused by Osteoarthritis. The methodology involves the feature extraction from the Region of Interest (ROI) and classification of those features. Haralick feature extraction technique and Support Vector Machine classifier (SVM) with the kernel functions are used for the development of the algorithm. The algorithm is tested with the various combinations of Haralick features and kernel functions.130 digital X-ray images of knee joints are used for testing the developed algorithm. This methodology produced a successful classification rate of 99 percentage in the diagnosis of skeletal disorders caused by Osteoarthritis.

The degenerative disorder in bone accompanied by pain, swelling and joint immobility is termed as Arthritis. There are more than 100 varieties of Arthritis and Osteoarthritis (OA) is the most common among them which ruin the human society. The disease cannot be cured, but can be controlled at the early stage with proper diagnosis and medications. But the drawback is, only a limited methodology is available for the diagnosis of the disease. Those diagnostic procedures are either invasive or the analysis are being done manually. Hence the work is focused towards the development of non invasive, computer aided diagnosis for the assessment of skeletal disorders caused by OA at the early stage.

Evanthia et al. [1] proposed an automated method to segment and quantify arthritis from MR images. Various techniques like image preprocessing, identification of number of clusters, segmentation and post processing were involved in this method. Contrast enhanced weighted MRI was used for imaging. 25 subjects were used for evaluation. The specificity and sensitivity produced by this algorithm were 97 % and 83 % respectively.

Bonoatis et al. [2] proposed a method for the assessment of OA from radiographic images. The wavelet coefficients were estimated from the image under analysis. The mean, median and standard deviation were calculated for the wavelet coefficients. The calculated statistical features were classified using Bayes classifier. The accuracy achieved by the algorithm was 91%.

Lee et al. [4] proposed an automated method for the detection of suspicious pain regions from digital IR images. Survival of fitness kind of evolution strategy was applied on the ROI portions of IR images. Disease such as foot of glycosima, degenerative arthritis and varicose vein were able to diagnose with this method.

Nikola Borojevic et al. [5] proposed a method to diagnose RA and OA from thermographic images. The image obtained from three cases such as normal, control and those affected by arthritis were used for analysis. Statistical parameters like mean, minimum, maximum, standard deviation and variance were applied on the extracted feature from those images. The final results showed a significant difference in temperature between those cases.

Mahendran and Baboo [6] developed an automated method to segment X-ray images. The method used wavelet transform, dilation, erosion and closing operation on the texture features extracted over the region of interest (ROI) on X-ray images. This method provides an enhanced method for segmentation and the overall processing time is reduced by one second than the existing techniques.

Syaiful anam et al. [9] proposed a modified level set method for automatic bone boundary detection from hand radiographic images using diffusion filter. The proposed method was evaluated using five radiographic images. Improved performance over the existing method was observed with the obtained results. This method can be extended for the analysis of RA from radiographs.

Tatil.L.Megko [10] developed an automated method for the assessment of osteoarthritis in knee joints from radiographs. The classification of the algorithm was based on KL grades. The mean joint space width calculated from the extracted features was used for classification. This algorithm has produced satisfactory specificity and sensitivity rate. But the algorithm failed to define the extent of abnormality in the JSW.

Huo et al. [11] proposed an automatic joint detection method to diagnose RA from hand radiographs. The various techniques such as masking, midline detection, feature extraction and joint location were applied on hand radiographic images of size 2500 X 2500 pixels. The proposed method could able to detect PIP and MCP joints in fingers. The method was able to detect the change in joint space of 0.1mm also.

In this paper the computer aided diagnosis of OA from digital X-ray images is discussed. The paper is organized as follows. Section 2 describes the type of data used in this work. The methodology of the proposed work is given in section 3. The results are discussed in section 4 and the conclusion part is given in section 5.

The digital X-ray images of the knee joints which are made on the subjects reported to have the symptoms of OA is used for the development of the algorithm. In order to differentiate these abnormal subjects from the normal subjects the digital X-ray images of 10 normal subjects without any symptoms of OA is also taken. The actual size of the image is around 1000 X 1000 pixels. OA results in the reduction of Articular Space (AS) between the bones. Hence the ROI is cropped manually to a size of 200 X 200 over the AS from the actual image. The actual image and the ROI image are shown in Figure 1. a and 1.b respectively. This image preprocessing is done on all the images used for the training and testing.

Kellgren Lawrence (KL) grading system is the generalized grading system used for grading the AS narrowing or the joint space width in bone joints. The KL grading for OA is shown in Table 1. 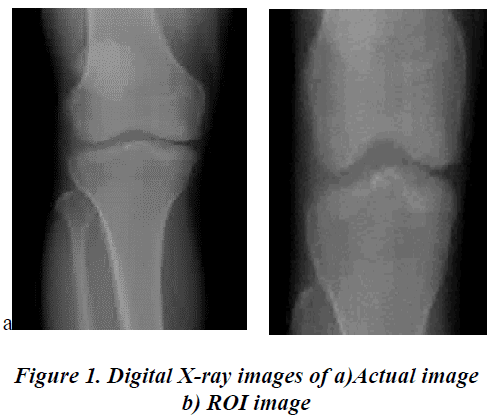 The proposed method involves two major steps in the diagnosis of OA. They are feature extraction stage and classification stage.

The first step in the estimation of Haralick features is the formulation of Grey Level Co -occurrence Matrix (GLCM) for the image. The mathematical definition for GLCM is given in Eq.1.

Dx,Dy -The displacement of pixels on the direction used.

The example given in Figure 2 illustrates the calculation of GLCM from a 4x4 pixel area.

Figure 2: Calculation of GLCM (a) 4x4 pixel area in an image (b) GLCM (c) normalized GLCM. 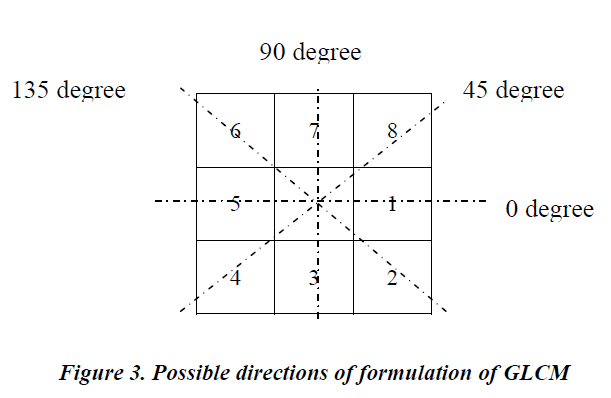 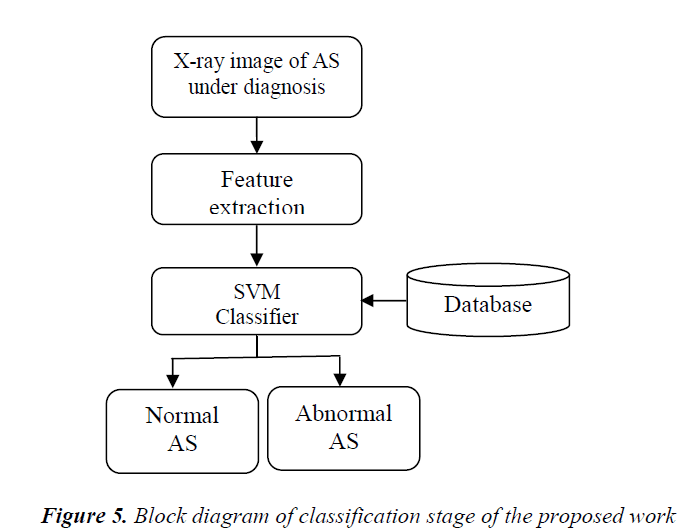 Figure 5: Block diagram of classification stage of the proposed work.

Step 1: Extract the ROI from knee X-ray images to be analyzed.

In this study, K fold cross-validation experiments are used to assess the performance of the proposed method. K fold cross-validation is widely used to analyze the classification performance of a classification system. It randomly generates indices which define a partition of N observations into K disjoint subsets. In K fold crossvalidation, K-1 folds are used for training and the last fold is used for evaluation. This process is repeated K times, leaving one different fold for evaluation each time.

In this work K is assigned as the value 5.The database used to evaluate the system contains images of 30 normal and 100 abnormal subjects. Among the samples, 25% of samples in each category are used to test the accuracy of the system and the remaining are used to build the classifier. All the testing images are pre-analyzed manually by the radiologist and the manual report is used to verify the classified results by the classifier. Based on the results produced by the algorithm, the images of the knee joints used for testing are categorized into True Positive (TP), True Negative (TN), False Positive (FP) and False Negative (FN).

The parameters such as accuracy, precision, sensitivity and specificity are the parameters used to evaluate the classification rate of the developed algorithm and those are calculated using the equations given in Eq. 2 -5.

The obtained results with the Haralick features extracted with one pixel displacement and with the possible angle are shown in Tables 3-6.

In this paper the computer aided tool developed to diagnose the bone disorders caused by Osteoarthritis has been discussed. This tool classifies the AS of the knee joint for the digital X-ray image under analysis into normal and abnormal class. This method provides a semi automated tool to examine the digital X-ray images for diagnosis of arthritis. The developed algorithm can be extended to diagnose other skeletal disorders through the efficient training with the samples. This tool helps in reducing the manual errors in the diagnosis and also aids in early diagnosis. In addition to the proposed method, the clinical investigations can be used for the confirmation of the disease.