Osteoporosis is a kind of disease characterized by reduced bone mineral density (BMD), deteriorated bone microstructure and increased bone fragility. The sites most susceptible to osteoporosis are those full of cancellous bones, such as proximal femur, thoracic and lumbar vertebral bodies. Osteoporosis can reduce the mechanical properties of bone, and the most serious consequence is fracture [1].

Previous studies of proximal femoral morphology were about the relationship between hip axis length (HAL) and hip fracture risk. However, no consensus was achieved. On the one hand, some researchers found that there was a strong correlation between HAL and fracture risk [7, 8, 11, 12]; but on the other hand, there were also some investigations that did not find such a correlation [13, 14, 15]. The studies mentioned above were mostly based on the two-dimensional Dual-energy X-Ray absorptiometry (DXA) images. As a matter of fact, planar image was only a projection of the object, which could not reflect the complex three-dimensional morphology of femur. Since the positions of the subjects may not uniform during the X-Ray scanning, large individual differences may occur from those images obtained. This may lead to a nonunified measurement [16].

The process of scanning usually brings in errors. The most accurate measurement is to measure the skeleton directly. This method can only be used to the threedimensional morphological parameters in vitro, but not in vivo. The operating habits of the operators would also have a great impact on results, so this measurement requires professional staff to complete the experiment and is not suitable for measuring a large number of in vivo samples.

Another method of morphological parameters measurement is to measure the parameters on three-dimensional proximal models that were reconstructed from clinic QCT images by reverse engineering technique. As X-ray planar imaging technology will zoom the object, there may be a large error existed in the morphological parameters when considering the measurement accuracy. This error is about 12% of general X-ray machine [17] and about 7% of DXA [18, 19], but with no errors in QCT. A previous investigation regarding cadaveric femurs was performed to measure the morphological parameters on X-ray images, CT images, as well as on the skeleton directly. The results showed that there was 2.4 mm error occurred on X-ray images and only 0.9 mm error on CT images. There was few literature on the comparison between computer aided measurement and manual measurement for one sample in vivo. So the differences between these two methods cannot be evaluated.

All subjects were scanned using clinic QCT (GE Medical Systems/LightSpeed 16). Since the radiation dose on subject should be strictly controlled, the scanning area was the part from upper edge of the acetabulum to 50mm below the less trochanter. QCT scan acquisition was performed with 80kv, 260mAs, 512×512 matrix, 0.938 mm pixel size and 2.5mm increment. All QCT data were imported into reverse engineering software MIMICS 10.01 (Materialize Inc.). All right femurs were used to do 3D reconstructions. After a series of operations, i.e., creating masks, region growing, 3D objects calculation and remeshing, models of right femurs were established. The subjects may not hold on a unified position during the process of scanning, in order to set a uniform measurement standard, all models need to be rotated and translated to a specified position according to the coordinate system generated by CT machine. Each model reconstructed by MIMICS was rotated around the X-axis and Y-axis respectively in MAGICS 13 (Materialize Inc.) to ensure that the shaft axis was perpendicular to XOY plane. As the shaft axis was fixed and morphological parameters were measured on three-dimensional models directly, anteversion did not affect the parameters measurement much [20]. The femoral model in the unified position was shown in Figure 1. 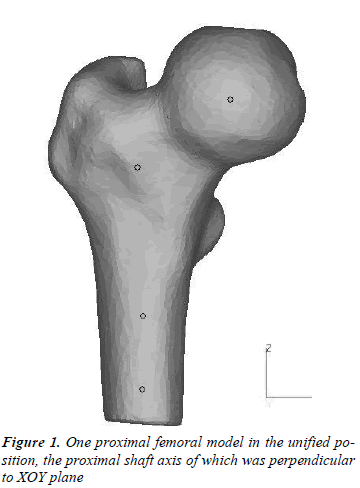 Figure 1: One proximal femoral model in the unified position, the proximal shaft axis of which was perpendicular to XOY plane

Figure 2: Measurements of three-dimensional morphological parameters of proximal femur. They are diameter of head
(HD), height of head (HH), offset (OFF), neck shaft angle (NSA), altitude difference from head center to the top of great
trochanter (TRH), thickness of femur (TOF), diameter of neck (ND), length of neck (NL), where NSA is an angle of skew
lines between shaft axis and neck axis.

HH: height of femoral head. Altitude difference from HC to the top of lesser trochanter.

OFF: offset. Distance from HC to shaft axis.

TRH: altitude difference from HC to the top of greater trochanter

ND: neck diameter. Fit the contour of the narrow end of neck cross-section with a circle. The diameter of the circle is defined as ND.

NL: length of neck. Distance between the two intersections points of neck axis and femur contour.

HD and TOF could be calculated by snapping node coordinates of femoral surface, but other parameters could not be calculated directly. The models should be cut off, and then the node coordinates inside the model could be snapped to measure these parameters. Therefore, a selfdeveloped program was made to integrate the process of parameters' calculation in Visual Studio 2008, which can calculate the three-dimensional parameters of proximal femur automatically. The program interface was shown in Figure 3. 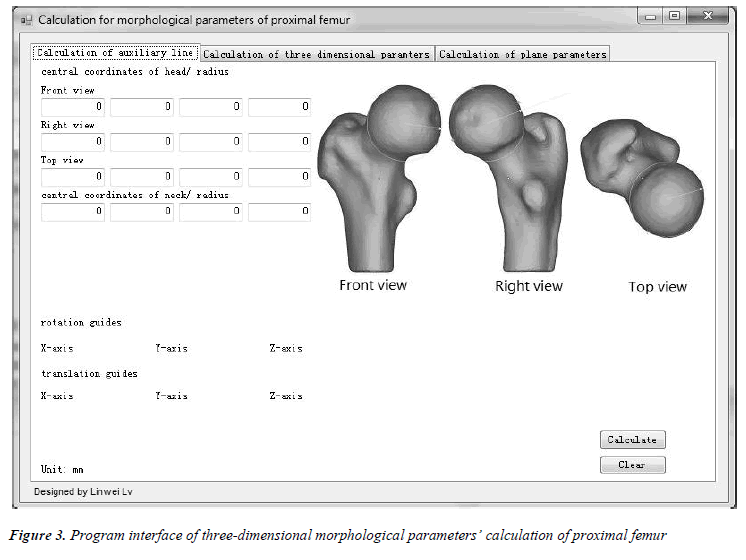 Verification about the measurement method

Five samples were selected randomly from the fifty-one samples to perform rapid prototype (RP) modeling, which were shown in Figure 4. Three-dimensional morphological parameters were measured manually on the RP models with micrometer and protractor. Paired T test was performed between manual measurement and computer aided measurement to validate our method. 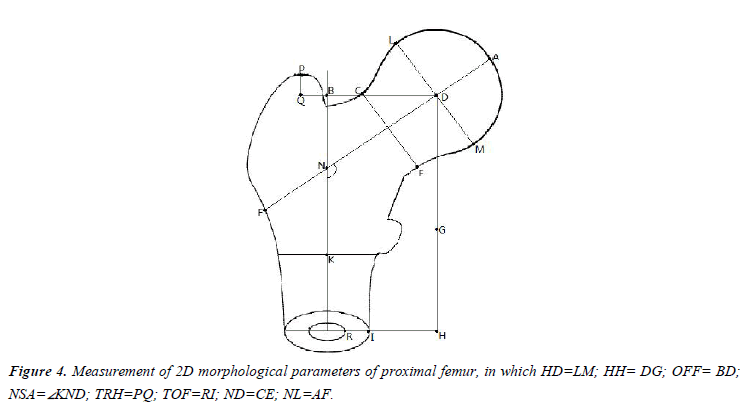 All parameters measured and age, height, weight, BMD were imported into statistical software SPSS 16.0 to perform statistical analysis. The mean value and the standard deviation were calculated for each parameter. Bivariate correlations analysis was performed between each two parameters. Independent-samples T test were performed for each parameter between group A and group B to observe the differences of morphology between different age groups.

In order to compare the difference with 2D measurement method, we also simulated a 2D environment in MAGICS and measured the 2D morphological parameters of each proximal femur. The definition of 2D morphological parameters of proximal femur was shown in Figure 5 [9]. Paired T test was performed for all eight parameters between two measurement methods, so we could find out whether there were differences existed between two methods. 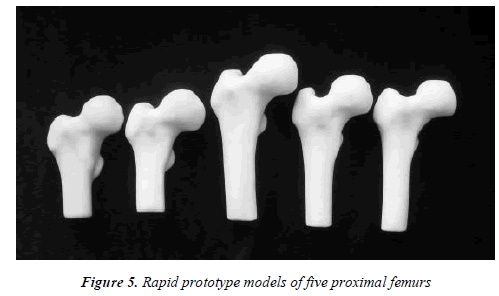 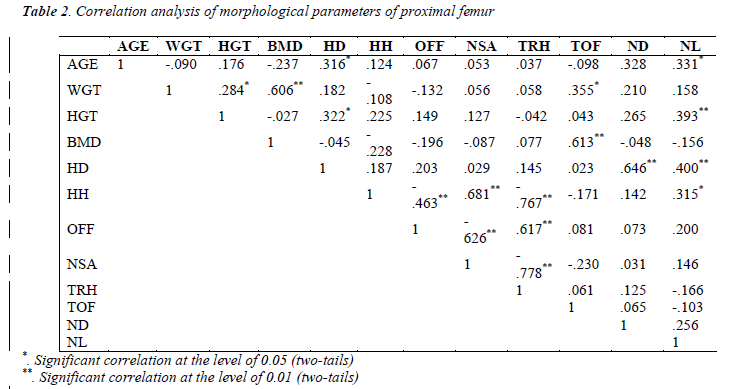 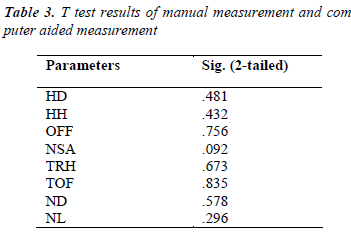 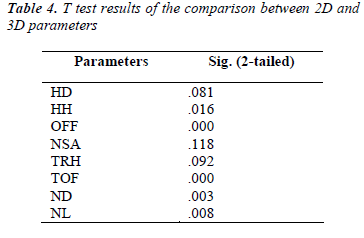 Table 4: T test results of the comparison between 2D and 3D parameters.

With the help of medical imaging technology, in this paper, an algorithm for measuring three-dimensional morphological parameters of proximal femur has been developed. In our pilot study, we have taken a measurement of 20 samples [22]. Correlation tests were performed between every two parameters and differences tests were performed between two age groups. Only non-parametric tests could be performed duo to small sample size. In this study, in order to further verify the algorithm, we also measured the same morphological parameters directly on rapid prototyping models by micrometer and protractor. The paired T test proved that the computer aided method we developed was reliable. The algorithm of morphological parameters of proximal femur designed by Dong and Zheng fitted femoral head into sphere, fitted femoral neck into round table and fitted shaft of femur into cylinder [23]. However, fitted proximal femur may miss a lot of morphological information. In the algorithm designed by us, in order to describe the morphology of femurs more feature points coordinates’ information were snapped. The cross-sectional shapes of different femoral necks were quite different, so for the different femoral necks, repeated measurements were taken to find the narrow end of femoral necks.

Chantarapanich et al. [24] measured femoral curvature and femoral length of proximal femur which were reconstructed from CT images. Song et al. [25] fitted the femoral head and part of acetabulum of reconstructed model with a sphere, and measured the center coordinates and radius of fitting sphere. However, they did not measure other parameters of proximal femur but these two parameters, and they did not verify the measurement method either. Kaneuji et al. [26] measured the anteversion of reconstructed models at coronal plane and sagittal plane separately. This method was still a measurement of 2D parameters. Aroonjarattham et al. [27] and Rubin et al. [28] measured the parameters on cadavers, which cannot apply to the in vivo measurement. For our method, however, not only the high accuracy as the measurement on cadavers could be reached, but also we can obtain the precise 3D morphology of femurs.

1. The process of model reconstructions using reverse engineering technique. The threshold of mask and remesh might have an impact on the size of models to be measured, but generally this error was less than the resolution of QCT images.

The morphology of male femur might be different from female femur, so during the measurement process, we eliminated gender impact factor and only measured male samples. Post-menopausal female generally have severe osteoporosis. Therefore, the choice of female age groups was quite different from male. In the future study, we will take measurement and analysis for female samples.